Accessibility links
Vietnamese Workers Fear U.S. Spending Slowdown As the economic crisis continues, the possibility that U.S. consumers will spend less next year than they did this year is causing worldwide concern. In Vietnam, which exports a large share of its products to the U.S., garment factory workers are already worried about their jobs. 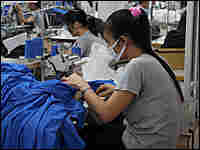 Hanoi's Hanosimex factory sends about 60 percent of its products to the United States. Ngo Xuan Tung for NPR hide caption 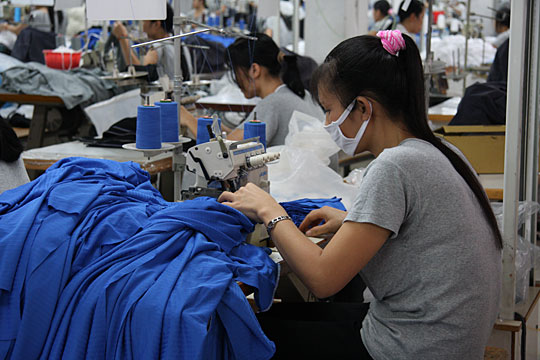 Hanoi's Hanosimex factory sends about 60 percent of its products to the United States.

The very real possibility that American consumers will spend less next year than they did this year is causing worldwide concern, especially in countries that export a large share of their products to the United States. For nearly three decades, U.S. consumption has risen every year and has been a powerful engine for growth in the global economy.

So while it's still early to predict what a slowdown in U.S. consumer spending would mean for Vietnam, workers on the production floor at state-owned garment factory Hanosimex are already worried.

Nguyen Thi Thao is grateful for the $70 a month she makes. The 28-year-old has a husband and a 9-month-old baby.

"I watch the news on TV, and I heard about all the trouble in the U.S.," she says, "and I know it will affect us, because if the U.S. economy slows down, Americans might reduce orders and spending. And that might mean fewer jobs for people like me."

The United States is Vietnam's single largest export market. Roughly half of all exports from Vietnam to the U.S. are clothing and footwear.

"As American consumers withdraw their spending and head into a sort of financial cocoon, you're going to see these exports drop," says Adam Sitkoff, the executive director of the American Chamber of Commerce in Hanoi. "And that's bad for the Vietnamese economy, it's bad for Vietnamese workers, and it's bad for bilateral trade."

The U.S. market accounts for about 60 percent of the exports at Hanosimex. The company's deputy director, Nguyen Thanh Bingh, says her clients have already started cutting back on orders.

"Among our high-end customers, orders are down about 40 percent from last year," she says. "Orders for less expensive items are off about 10 percent, reflecting trends in the U.S. as consumers shift spending from high-end retailers to box stores like Wal-Mart and Target. And almost all our customers are asking us to lower our prices."

Nguyen Thanh Bingh says her company has no plans to lay off workers for now, but large, state-owned companies like hers are better equipped to ride out the economic downturn. Smaller and private producers in Hanoi and Ho Chi Minh City have already started letting people go.

Vietnam's economic growth has been phenomenal in recent years, averaging about 8 percent, second only to China. A record $60 billion in foreign direct investment was pledged this year, but that was before the global economy went south.

Phan Huu Thanh, head of Vietnam's Foreign Investment Agency, says Vietnam may end up with only one-third of what's been pledged as credit and capital become tight worldwide. But, he insists, that will still be enough.

The government is expecting a drop in economic growth this year — from about 8 percent to roughly 6 percent. That's bad news for a developing economy, but not as bad as it could be.

"The good news is that Vietnam is still one of the fastest-growing economies in the world. The government recognizes that and companies realize that," says Sitkoff of the American Chamber of Commerce. "Day by day, week by week, we still see more international companies looking at Vietnam as a destination to do business, a destination to manufacture. And so as the world economy seems to sink and contract, companies all around the world are going to be looking at the bright spots where there is still positive growth. And I think Vietnam is going to remain one of those locations."