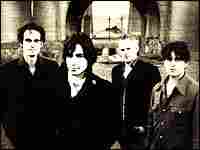 Formed in 1993 and led by former Mercury Rev member Jason Russo, Hopewell has released a few albums and a ton of singles, in the process attracting little more than an underground following. First released a few years ago, but updated on the new Notbirds EP, the song "The Notbirds" nicely sums up Hopewell's ability to craft arena-friendly, '70s-style psychedelic rock.

"The Notbirds" offers a sweet ride of near-perfect guitar rifts and lazy, spaced-out rock, punctuated by aggressive bird noises. (Why not?) It's hard to ignore the Pink Floyd-influenced jam providing a through-line — which makes sense, given that the lyric seems to be merely along for the ride: "She said you're killing me / Pound me deader than a nail / He said you're killing me / Send me off in the U.S. mail." Hopewell's words don't offer much to hang on to, but with a bird screaming along, it's easy to let that slide.