Accessibility links
TV Nannies Offer A Spoonful Of Schadenfreude What's the appeal of watching another family's meltdown? For starters, it's knowing that your kids aren't the worst ones on the block. 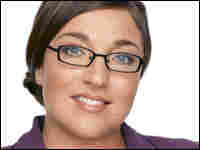 "Supernanny" Jo Frost Explains The Principles Of The "Naughty Step."

Kids out of control — and hopeless parents totally unhinged. That's what some five million people see when they tune into reality TV shows like Supernanny and Nanny 911.

The shows feature seasoned British nannies who observe a family in chaos and figure out what the parents are doing wrong, then train them in techniques to make things better.

So what is the appeal of watching another family's meltdown? Marlene Taylor, a nanny in Washington, D.C., says she likes to see how American people deal with children.

"I'm from the islands," says Taylor. "I think parents here are too lax."

Carrie Kirby, a mother who runs the Chicago Moms Blog, says she learns a lot by peering into another family's dirty laundry.

"It's like a free parenting class," says Kirby, adding that she has learned different time-out techniques by watching Supernanny's Jo Frost.

"It's like a cautionary tale," she says. "When you see how bad it can be if you don't do these things, it gets you to do them."

Ah, nothing like feeling a little pleasure in someone's else's pain, but what about the long-term consequences of the show?

Kimberly Bell, a clinic associate at the Hanna Perkins Center For Child Development in Cleveland, is concerned these shows make dealing with the inner psyche of a child look easy.

"These are ... children who are in emotional pain," Bell warns. "Parents want to stop that, so anytime they're given a technique they want that quick fix."

But Frost says there is nothing quick or easy about the process the families go through. Maybe that's why producers have a hard time casting for the show. So far, 80 American families have agreed to expose their messier side on national TV.

"I really do salute their courage because without those families, they wouldn't have helped the millions of people who watched the show," says Frost.