Accessibility links
CIA Director: Al-Qaida Remains No. 1 Threat To U.S. Seven years after the Sept. 11 attacks, the CIA has updated its official assessment of the al-Qaida terrorist network. Agency Director Michael Hayden says al-Qaida remains the most present danger to the U.S. Hayden spoke Thursday in the midst of the presidential transition, the first during wartime in 40 years. 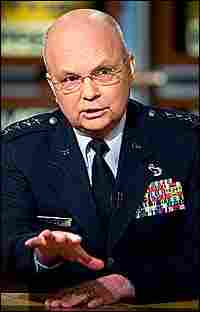 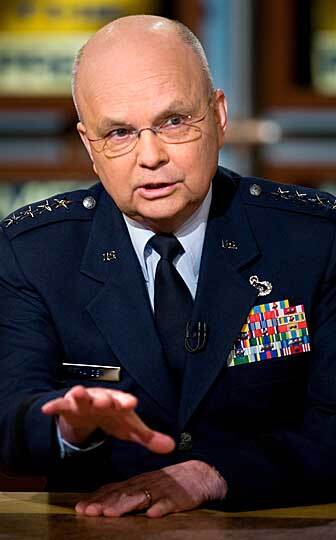 CIA Director Michael Hayden appeared on Meet the Press March 30 to discuss the war on terrorism.

Seven years after the Sept. 11 attacks, the CIA has updated its official assessment of the al-Qaida terrorist network. Michael Hayden, the agency's director, says al-Qaida remains "the most clear and present danger to the United States today."

Hayden spoke Thursday in the midst of the presidential transition, the first handover during wartime in 40 years. He said his agency is aiming for "the smoothest transition in recorded history."

Except for his appearances on Capitol Hill, it is rare for the CIA director to discuss al-Qaida in public at length. Speaking at the Atlantic Council on Thursday, Hayden emphasized that the date and the topic were set months ago, and that it was a coincidence he was describing the al-Qaida threat just as the country was changing presidents.

His assessment was sober but balanced. He said the network has been disrupted by counterterrorism efforts but is still the No. 1 U.S. enemy — if there is a major strike on this country, "it will bear the fingerprints of al-Qaida."

The network has operations from North Africa to Southeast Asia, he said, but the most dangerous al-Qaida bases are in the tribal regions along Pakistan's border with Afghanistan.

"All the threats we have to the West have a thread that takes them back to the tribal region. It may be training, it may be command and control, it may be financing, but there is at least one, and in some cases many threads that take them back there," Hayden said.

Al-Qaida organizers have made alliances with extremist Taliban groups in Pakistan, supporting their causes, funding their operations, even marrying their women.

From those bases in Pakistan, al-Qaida is plotting new attacks in the U.S. and Europe, Hayden said — recruiting Westerners who could carry out a plot with less chance of being detected.

Some observers believe al-Qaida would like to attack during this critical presidential transition, when U.S. defenses may be down. But wanting to and being able to are not the same, Hayden said.

"This is not an omnipotent enemy," he said. "This is an enemy whose actions we can affect by the actions we take. In many ways, we've been taking those actions and keeping them off-balance. So even if al-Qaida had this strong wish to do something between Date X and Date Y, it's another thing to do it ... beyond just the wish."

Hayden went so far as to say there's still no evidence that al-Qaida is up to something special during this transition period.

"We are chugging along with the threat as I described it, and I do not see any real or artificial spike because of the American political process," he said.

The hunt for al-Qaida founder Osama bin Laden is still a top CIA priority, according to Hayden. Bin Laden's death or capture, he said, would erode the "confidence" of his al-Qaida followers.

So why hasn't bin Laden been caught? Consider the territory where he's hiding, Hayden said: rugged and inaccessible.

In recent months, there have been new efforts by the CIA and the U.S. military to pursue al-Qaida in the hills of Pakistan, including missile strikes from unmanned drone aircraft and even commando raids by U.S. Special Forces. The Pakistani government has vigorously objected. But Hayden notes that he met recently with the head of Pakistan's intelligence service and found that there is "more commonality" of purpose between the two nations than is normally assumed.

As for his own future, Hayden noted that the CIA director serves at the pleasure of the president. "We think we're doing some things well," he said, and he would "seriously consider" staying at the agency if asked to do so. But that's the decision of the president-elect, Hayden said.

Barack Obama has not yet signaled his intentions, but he is already getting advice from fellow Democrats. At the very time Hayden was speaking Thursday, Democratic Sen. Russell Feingold of Wisconsin put out a statement saying it's time for "new leadership" in the intelligence community.