Accessibility links
IRCAM: The Quiet House Of Sound A mecca for classical composers looking for ways to bridge music and technology, IRCAM in Paris has been an incubator for some of the most compelling developments in contemporary classical music and acoustics of the past three decades. 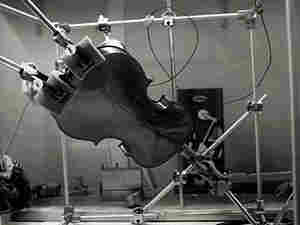 A violin is put to the test in an IRCAM lab. Courtesy of IRCAM hide caption

Mention the name IRCAM to a roomful of classical musicians, and half will cheer while the other half rolls their eyes.

IRCAM is an acronym that stands for Institut de Recherche et Coordination Acoustique/Musique. Roughly translated, it's the Institute for Musical and Acoustic Research and Coordination.

Since it first opened its doors in Paris in 1977, IRCAM has been a mecca for classical composers looking for ways to bridge music and technology. John Cage, Karlheinz Stockhausen and Terry Riley have all worked there. For more traditional musicians, the institute is something of an enigma.

IRCAM is located in noisy central Paris. A few blocks from City Hall, next to the colorful Pompidou Centre stands a bland steel and glass building. Duck inside the IRCAM sound research center, and what you hear is, well, nothing much. Most of the "sound science" takes place underground, in modest acoustic caves that line a couple of gray corridors. Inside those rooms, sound technicians, designers and composers, usually wearing headphones, silently punch at keyboards. They might easily be confused for software engineers in Silicon Valley.

High up on the sixth floor, where he can look down on architect Renzo Piano's famous Pompidou plaza, IRCAM's director, Frank Madlener, describes what's going on down below. The German-Belgian Madlener is not a musician, but he pushes his team of engineers and designers to continually rethink and challenge the basic notions of sound. Madlener says that IRCAM always poses a simple question.

"What's the relation between man and machine?" he asks. "How will electronics follow a [human] player?"

IRCAM was created more than 30 years ago by the Pompidou Centre as a kind of aesthetic lollipop to lure Pierre Boulez back to France from Germany — where he was established as one of the 20th century's pre-eminent composers. Boulez had been interested in electronic music since the 1950s, but he'd always been dissatisfied with the way electronics had been combined with acoustic instruments. Working at IRCAM, he wrote a piece that utilized orchestra musicians and a computer playing off each other.

"Repons" premiered in 1981. In it, Boulez put an instrumental ensemble of 21 musicians on stage and placed six soloists around the hall. The audience sat between them. The sounds produced by the soloists were fed into a computer and recombined with those produced by the entire group. The goal was to create a coherent electro/acoustic sound — not just one kind of sound augmenting the other.

Today, IRCAM's primary mission remains much the same: It works with composers to realize their ideas through technology. Musicians are invited to come to Paris to work with a staff of 150 people. British composer Jonathan Harvey has been a frequent IRCAM collaborator. The research institute helped him compose a piece in which acoustic orchestra instruments fed through a computer create sounds that seem almost human.

Sound engineer Olivier Warusfel spends most days sequestered in an audio cave with a computer. He explains how acoustic instruments and electronics can work together.

"We are very interested in music where you have real instruments on stage and virtual sound sources, which can be coming directly from the computer or transformed from the real-time recording of instruments onstage," he says. "So you can have more augmented instruments, where the player is playing live and the recorded sound will be transformed by a computer and played back on an electronic system by several loud speakers around the audience."

Another technique IRCAM is developing uses scores of small speakers lined up around the concert hall to create something called wave field synthesis, or WFS. It was designed to address a problem that's been brought to IRCAM over and over again: dead spots in concert halls. Madlener explains that, depending on where you're sitting in relation to the sound source, it's either too loud or too soft.

To hear the effect of wave field synthesis, you have to be inside a WFS hall, where no matter where you're sitting you're enveloped — but not deafened — by the sound those carefully placed speakers produce. The closest most of us can get to WFS is in video-game parlors where each player wears headphones that provide a sense of space, place and movement.

Not Just For The Concert Hall

IRCAM regularly contracts with companies like Sony and film studios on proprietary inventions. It even advised carmaker Renault on how to match the sound of its car doors closing to the company's marketing imagery.

One of the most interesting challenges IRCAM faced came from Belgian filmmaker Gerard Corbiau, who wanted to re-create the voice of the Italian singer Farinelli for his 1994 biopic. Farinelli and other boys were famously castrated during the 18th century to conserve their high-pitch voices. Madlener explains how the institute did it, painlessly.

"They wanted to create a virtual castrato, so we took a soprano and we took a high man [a countertenor] and we mixed them," Madlener says. "And the funny thing is, the singers — after [hearing] this morphing — they didn't recognize who was who."

Perhaps the most accessible IRCAM project so far is still in the computer. The research center is collaborating with landscapers in central Paris to create a "sonar garden." What visitors will hear upon entering the park will change according to how many people are there, what time of day it is, the season or even whether it's cloudy or rainy. But that's still a year or two away.