Accessibility links
New Details Surface About Georgia-Russia War In the three months since the conflict between Georgia and Russia over the breakaway province of South Ossetia, details have come to light about how and why Georgia ended up going head-to-head against the much larger Russian army. 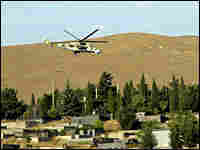 A Russian Hind Mi-24 attack helicopter swoops back after carrying out an airstrike on Aug. 11. Ivan Watson/NPR hide caption 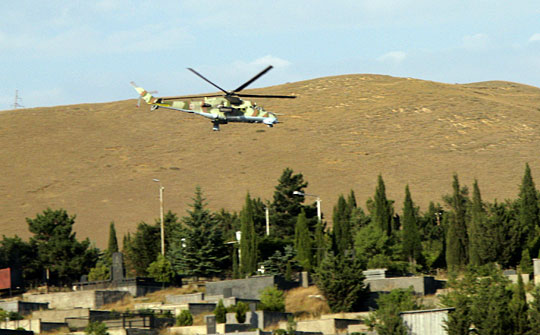 A Russian Hind Mi-24 attack helicopter swoops back after carrying out an airstrike on Aug. 11. 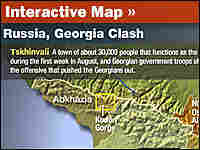 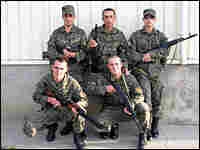 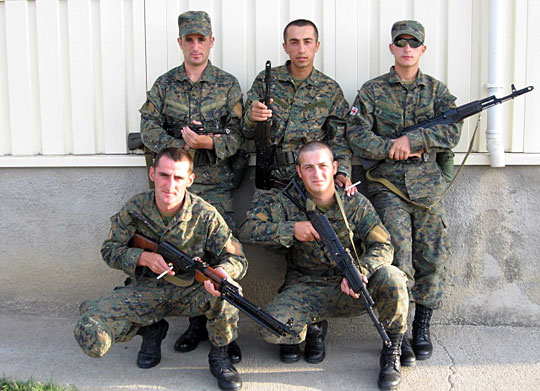 Mamuka Kevlishvili (bottom right) was in the Georgian army for six months before his unit was ordered into battle. 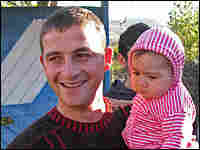 "It was the morning of Aug. 7 — we didn't even have time to eat breakfast," says Kevlishvili, shown here with his daughter. "They put us on buses and told us we were going to South Ossetia." Ivan Watson/NPR hide caption

Last summer, the world was stunned to see columns of Russian tanks invading the small neighboring country of Georgia. The U.S. and Europe condemned the invasion, but Russia said it was only a response to Georgia's artillery and infantry assault on the Russian-backed breakaway region of South Ossetia.

In the three months since the conflict, new details have emerged about how and why Georgia ended up going head to head against the much larger Russian army.

Mamuka Kevlishvili had only been a soldier in the Georgian army for six months when his unit got the urgent order to go to war.

"It was the morning of Aug. 7 — we didn't even have time to eat breakfast," the 23-year-old Kevlishvili says. "They put us on buses and told us we were going to South Ossetia."

The soldiers were laughing and in good spirits. Like many Georgians, Kevlishvili dreamed of helping his country regain control of the breakaway region. Before leaving, the soldiers were told to trade in their Soviet-style Kalashnikov rifles for American-made M4s.

The next morning, Kevlishvili and his unit walked unopposed into the South Ossetian town of Tskhinvali. By then, he says, it had already been captured by the Georgians.

"The city was quiet and empty. I didn't see any civilians," he says. "Where the Russians and Ossetians had had their checkpoints, the buildings were burning. I fired my gun a few times in the air, not aiming at anything."

'The Buildup of Tension'

Georgia insists it was acting to stop an imminent Russian invasion, but the Russians say Georgia started the war.

"I'm not sure ultimately that that's very interesting — who shot the first shot on the seventh of August," says Peter Semneby, the EU's special envoy to the Caucasus. "It's more relevant to look at the whole buildup of tension and escalation that took place over a fairly long period of time."

A year before the war broke out, Russia fired a missile deep into Georgian territory. Georgian unmanned aerial drones were shot down over the country's other breakaway region, Abkhazia. Last summer, Russian fighter jets were regularly buzzing Georgian airspace, and there had been a series of deadly skirmishes between South Ossetian separatists and Georgian forces.

"Human Rights Watch has documented apparent indiscriminate firing, disproportionate use of force being used by the Georgian military during its advance on South Ossetia," Gogia says.

Georgian officials deny these charges. Instead, Georgian Cabinet minister Temuri Yakobashvili says the Georgians successfully used Grad rockets purchased from Israel to destroy a Russian armored column that was advancing from Russia into South Ossetia — wounding a top Russian general in the process. As evidence, Yakobashvili shows a video on his cell phone, apparently filmed by a Russian soldier, who curses as he looks at the twisted wreckage of armored vehicles and the mangled corpses of several young men in green uniforms.

"The number of Russian casualties show [the rockets] worked very well," Yakobashvili says. "They were never directed against the civilians. ... We combed the roads with these bombs where the tanks were advancing."

Yakobashvili claims anti-aircraft systems — some of them also purchased from Israel — shot down at least 14 Russian planes.

But these apparent military successes could not hide the fact that the tiny Georgian army was clearly unprepared to confront the thousands of Russian soldiers and tanks that were now fast approaching on two fronts. When the war broke out, 2,000 of Georgia's best-trained soldiers from the army's 4th Brigade were deployed — in Iraq.

The troops sent to South Ossetia were left to fight for days without supplies of water or food, and the Russians successfully jammed the Georgian military's communications systems, which sometimes amounted to little more than cell phones. Georgian officials say that when the war broke out, they had only partially completed the rollout of a new American-made communications system.

On the night of Aug. 9, less than 48 hours after Kevlishvili arrived in Tskhinvali, his unit was fleeing on foot, trying to escape a ferocious Russian aerial bombardment.

"That night was hell. There's no way to escape the airstrikes," Kevlishvili says. "They destroy entire buildings. People lost their hands and legs. Even now, I can remember the smell of burning blood."

On the afternoon of Aug. 11, at least seven Russian Hind Mi-24 attack helicopters swooped in a low, deadly formation over the battlefield and unleashed several terrifying minutes of blistering cannon fire on suspected Georgian targets. Barely an hour after the airstrike, the Georgian military was in full retreat — not only from South Ossetia, but also from the strategic Georgian city of Gori.

Kevlishvili escaped the conflict zone by hitching a ride on a passing tank.

As the Russian army began its advance deep into Georgian territory, government minister Yakobashvili says some officials proposed launching an insurgency against the invaders.

"There were talks to use the guerrilla tactics, but we deliberately avoided that strategy because it would bring more destruction to our country and more casualties among military and civilians," Yakobashvili says. "So we deliberately withdrew our troops to give a chance to the international community to interfere and to engage into cease-fire."

But the retreating Georgian army left tens of thousands of civilians behind who faced retribution at the hands of South Ossetian militias. Russian forces also occupied and dismantled Georgian army bases, and the breakaway regions of South Ossetia and Abkhazia both declared independence from Georgia, after what can only be described as a crushing military defeat.

As for Kevlishvili, he returned home — visibly traumatized — to his 24-year-old wife and 9-month-old daughter.

"He couldn't sleep; he was jumping out of bed," says his mother, Nana Kevlishvili. She says that after 20 days of therapy in a local hospital and medication, her son's condition has improved.

"I remember the sound of a skull being [crushed] as a tank was rolling over dead bodies," Kevlishvili says. "It is a sound I will remember for the rest of my life."

The army discharged Kevlishvili and dozens of his fellow soldiers — depriving him of the $400-a-month salary he relied upon to feed his young family.

"I didn't expect a medal," Kevlishvili says. "But I did my best as a soldier. ... I'm disappointed that they forced me out of the army."