Accessibility links
Church Preaches The Music Of Beethoven Albuquerque, N.M., is no different from any other American city, in terms of its religious life. But an abandoned gas station along old Route 66 serves as the unlikely home for another kind of Sunday-morning service. The Church of Beethoven is an offbeat venue that mixes religion and classical music. 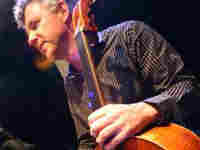 toggle caption
Courtesy of the Church of Beethoven

Watch a video of founder Felix Wurman describing the Church of Beethoven.

Watch a video of the inaugural performance from the Church of Beethoven. 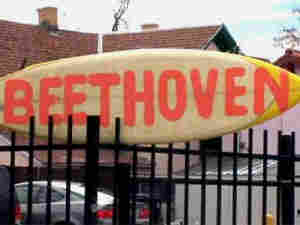 toggle caption
Courtesy of the Church of Beethoven

Albuquerque, N.M., is no different from any other American city, in terms of its religious life; you've got churches, synagogues, a couple of Unitarian congregations and a mosque. But an abandoned gas station along old Route 66 is the unlikely home for another kind of Sunday-morning service, and it's one that you won't find anywhere else. It's called the Church of Beethoven.

Felix Wurman isn't a rabbi, priest or preacher. He plays the cello. He didn't feel at home in church, because he's not religious. But he says he also felt that there was something missing in formal concert halls where he performs.

"One of the things you do as a professional classical musician is play 'church jobs,' " Wurman says, "and I always felt that this is so wonderful, all this music, the collection of people, this beautiful room. But there was something lacking."

Wurman is a member of the New Mexico Symphony Orchestra. Before that, he studied with the legendary British cellist Jacqueline du Pre, toured with Andrew Lloyd Webber and performed with Chicago's Lyric Opera Orchestra.

Last February, he created it. It's sort of like a variety show, with poetry readings, group singing, silence and music. But he's trying to make it more than that: a community, a spiritual place, like a church for people who don't go to church.

"Really, the idea is to find spirituality through culture, through the cultural gifts that so many people have suffered for and created over so many generations," Wurman says. "There's so much information there that's useful."

On a typical Sunday morning, a crowd gathers at the Filling Station, an old gas station that's been converted into a theater. It's in one of Albuquerque's oldest neighborhoods, surrounded by small brown adobe houses, a few blocks from the hulking shell of the old Santa Fe rail yards.

Coffee is a major part of the liturgy here — good coffee. Two cheerful baristas serve everyone free espresso in brightly colored ceramic cups. Laura Motter and her husband Nathaniel, who rode to the church on their tandem bike, have been attending faithfully since last spring.

"The first time I came, I heard about it from a friend who was reading poetry here, and we were just kind of blown away by what you can hear in a gas station in Albuquerque," Motter says.

At the Church of Beethoven, the audience sits on plain wooden risers. The cement floor has been scrubbed clean of oil stains, but the exposed brick and cinderblock walls still look as if they were blackened by exhaust. Wurman doesn't always program classical music, but on this particular morning, the church lives up to its name, with a Beethoven string quartet.

"His music is probably the most important reason I selected him as figurehead," Wurman says of Beethoven. "Because he really took a lot of chances with his music, in terms of the emotional content of it, he just doesn't give you any notion of what's coming. And then, all of a sudden, he's in a different mood altogether. I just think that's just so human."

Wurman adds that, unlike Bach, Beethoven didn't write that much church music. In fact, he rarely, if ever, went to church.

"He poured all that spirituality that he couldn't find a place for in the traditional church, he poured it straight into his art," Wurman says. "And that's what most of the great creators did. And so I can just go and grab that incredible crystallized piece of beauty and present it to people."

Dwayne Longabaugh has a subscription to the symphony, but he comes to the Church of Beethoven for a different musical experience.

"You're sitting three feet from the musicians, and you can actually feel the music, instead of just hearing it," Longabaugh says. "The lower notes of the music actually reverberate in your chest."

Wurman refuses to charge admission, because churches don't do that. But he does have expenses to cover, so he asks for donations. Sometimes he comes out ahead; sometimes he doesn't. But in just nine months, he has built a devoted Sunday-morning following, as well as a community. Wurman says he's determined to see his church survive and prosper.

"I have struggled so long in the arts," he says. "It's like you're crying in the wilderness. You're saying, 'Look at all this incredible music that really isn't getting out there to the extent that it should.' "

Wurman says he doesn't want the Church of Beethoven to grow into a megachurch, because that would destroy the intimacy that makes it meaningful. But he'd like the idea to get big, and spread, with churches of Bach, Schubert, Mahler and Bernstein sprouting up.

"My goal is to disseminate all of this wonderful art," Wurman says, "because people don't know that much about it. I know there's an audience for it."