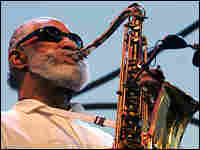 Sonny Rollins is a true jazz legend, a sax player with a six-decade career and a giant who's outlasted the giants he played with: Miles Davis, John Coltrane, Thelonius Monk and Bud Powell.

Rollins' career spiked in the 1950s with a series of acclaimed recordings, including perhaps his best-known song, "St. Thomas," which experimented with calypso rhythms.

But his career has also had its downturns. In 1959, he retired from playing gigs and became famous for practicing alone on the Williamsburg Bridge in New York. He has also battled health problems.

Rollins is 76 now, and with the death of his wife Lucille two years ago (she managed Rollins' career for three decades), some might have expected the "Saxophone Colossus" to slow down. But Rollins is taking his career into his own hands. He's started his own record label, launched a new Web site, and continues to tour and record. Sonny Rollins' new record is called Sonny, Please.