Accessibility links
Credit Markets Stalled While Waiting Game Played Commentator Russell Roberts says businesses and consumers are waiting to see what the government does next. In the meantime, those who lived within their means are paying the most for the economic bailout. 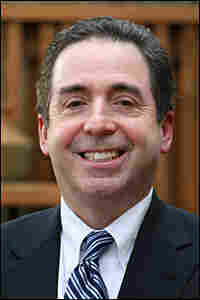 Secretary Paulson might be the only person in America who worries that consumers haven't borrowed enough money. He says the consumer credit market has "ground to a halt." He wants to get it going again — maybe if we all just buy enough cars and use our credit cards, the economy will come back to life.

Paulson is also upset that banks aren't doing enough. He's given them all this money and they're sitting on it.

He doesn't seem to realize that these two phenomena are really one and the same.

He can inject all the money he wants into the consumer credit market and it isn't going to make us want to buy cars or use our credit cards.

We did enough of that for a while. More than enough. Too much. And right now, before we spend, spend, spend, we're going to wait and see if we keep our jobs.

But we're also going to wait and see what the government's going to do next. Nobody knows, and that evidently includes the secretary of the treasury.

When no one knows how the rules of the game are going to change — and they seem to change from week to week — who wants to take a risk? Who wants to borrow money? Who wants to invest? Business and consumers are hunkering down, waiting for the storm of change to pass.

Paulson doesn't realize that his erratic attempts at creating liquidity are creating the uncertainty that makes liquidity meaningless.

And his erratic moves elsewhere just add to the uncertainty. A few days ago, he announced that he was "exploring strategies" to use the TARP (the Troubled Asset Relief Program) for "foreclosure mitigation." Then came the news that, no, the FDIC would have to go it alone in helping mortgage workouts. No TARP for them.

I guess he's done exploring. At least until tomorrow.

As the TARP spreads, the cost will keep rising. Remember the talk about how the government might even profit from its $700 billion "investment?" (Insert hollow laugh here.)

I'd feel better if the money spent so far was helping. But there's no evidence that it is achieving what Paulson intends.

And who's going to pay for all of this? Those who lived within their means, who went with the smaller house, who waited a few more years to get that new car, who took a part-time job rather than borrowing even more money to pay for college. Suckers. You missed out on the thrills and now you're going to be paying the bills. The prudent will be paying for the imprudent for a long time.

The great economist F.A. Hayek wrote that "the curious task of economics is to demonstrate to men how little they really know about what they imagine they can design."

With each improvisation, Secretary Paulson is proving how little he knows about what he imagines he can design.

Russell Roberts is professor of economics at George Mason University and a research fellow at Stanford's Hoover Institution. His latest book is The Price of Everything: A Parable of Possibility and Prosperity.