Accessibility links
Hispanic Turnout May Spur Immigration Overhaul In recent years, politicians have treated immigration as the third rail. But as the number of Hispanics grows — and as they turn out in greater numbers at the polls — advocates say the issue of immigration will be harder to ignore.

Marco del Fuego at a protest outside of Immigration and Customs Enforcement on Sept. 3 in Washington, D.C. Brenda Hoffman/Getty Images hide caption 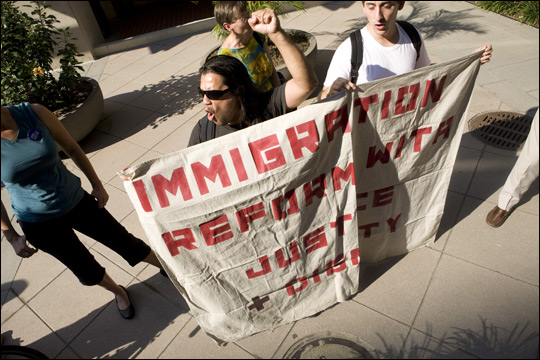 Marco del Fuego at a protest outside of Immigration and Customs Enforcement on Sept. 3 in Washington, D.C.

In recent years, political advice on immigration in both parties has gone something like this: "It's the third rail of politics." "The less said, the better." "If you say anything, talk tough."

But with President-elect Barack Obama's solid win — and his overwhelming support from Latinos — some think that advice may change.

"What the election showed is that the conventional wisdom on why immigration reform is too hot to handle is wrong," says Frank Sharry of America's Voice, a pro-immigration lobbying group.

More Hispanics than ever voted, and they voted 2-to-1 for Obama over McCain. Sharry says Latino support was decisive in helping deliver the swing states of Nevada, New Mexico, Colorado and Florida. And polls show it was the immigration issue — specifically some in the Republican Party who demonized illegal immigrants — that helped drive Latinos to the Democrats.

"The large, vocal anti-immigrant vote that has hijacked the Republican Party — they have a lot of bark but not a lot of bite," Sharry says. "They couldn't turn elections."

Sharry's group tracked 18 close congressional races that pitted an enforcement-oriented Republican against a pro-legalization Democrat; in nearly all, the Democrat won. As a senator and during the presidential campaign, Obama also expressed support for legalizing an estimated 12 million immigrants, provided they pay a fine, pay back taxes and learn English.

Does that mean an immigration revamp in Obama's first 100 days? Well, it's not likely, and if nothing else that's because of the economy. Labor economist Vernon Briggs of Cornell University says it's harder to argue for legalizing millions of low-skilled immigrants when many more low-skilled Americans are likely to find themselves out of work.

"The unemployment rates for unskilled workers without high school diplomas, or only a high school diploma, are the highest in the United States," says Briggs. "There's no indication that our labor force is in desperate need of unskilled, poorly educated, non-English speaking workers."

Supporters of legalization see it differently, arguing that the best way to make sure immigrants do not pose an unfair threat to American workers is to make the immigrants legal. But even ardent immigrant advocates admit the economic collapse does change something else.

"It probably takes off the table the creation and rapid implementation of any major new guest-worker program," says Craig Regelbrugge of the Agriculture Coalition for Immigration Reform.

Still, even if there's no support for bringing in new workers, Regelbrugge sees an argument for legalizing agricultural workers already in the United States. Seventy percent of them are believed to be undocumented, and he says these jobs do not disappear in a bad economy. Regelbrugge says efforts to find Americans to take agriculture jobs have failed, but each immigrant worker supports three to four other U.S. workers.

"So to the extent that Freida the fertilizer salesperson or Chuck the cheese factory worker are worried about their own well-being, so too they should be worried about Miguel the milker and Pepe the peach picker," he says. "Their jobs are here together, and if the production moves, the American jobs move, too."

With the economic crisis, health care and energy dominating the political agenda, the Obama administration and the next Congress may well be tempted to keep pushing off immigration.

But if they do, lobbyist Sharry would urge them to think about 2012 and the decisive Latino vote that will have grown even bigger by then. Sharry believes Democrats will need to push an immigration overhaul to satisfy this now crucial constituency. And if the diminished Republican Party hopes to win back that Hispanic support, it could be harder for them to oppose it.