Accessibility links
Ljova: Giving The Viola A Chance Ljova is wired like an independent musician, in spite of his old-school instrument. He Skypes. He blogs. He posts music on Facebook and YouTube. And he composes by playing his viola into the computer, overdubbing and improvising the parts as he goes.

Bagel on the Malecon Reprise 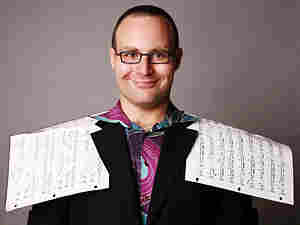 The viola has been the butt of many jokes, especially in the classical-music world. But not in the hands of "Ljova" (pronounced lee-YO-vah).

Born in Russia, Lev "Ljova" Zhurbin went to Juilliard. He used to play 20th-century music for the love of it, and he played weddings for the money. These days, he plays nightclubs, and he's a versatile arranger, working up music for Kronos Quartet, the Silk Road Ensemble and even Jay-Z. And, for last week's Latin Grammy Awards, he arranged tunes for the Gloria Estefan tribute. Lately, he's been scoring cartoons.

Ljova is wired like an independent musician, in spite of his old-school instrument. He Skypes. He blogs. He posts music on MySpace, Facebook and YouTube. And he composes by playing his viola into the computer, overdubbing and improvising the parts as he goes. Occasionally, Ljova admits, he just phones it in.

"I was at some wedding in New Jersey, and between sets, I just put my phone on the hood of some car that was parked in the parking lot," he says.

Ljova likes to fiddle into his cell phone, leaving himself voicemail melodies that pop into his head. They might come in handy later as nuggets for new tunes, or as ideas for arrangements. Reminiscing on his years of playing at weddings, he says the experiences were a blessing in disguise.

"Catholic weddings, Hindu weddings, Jewish weddings — playing music from Pachelbel to the theme from James Bond to Barry Manilow and all sorts of things you don't want to remember," he says. "The weddings actually made me improvise, because the arrangements were handwritten and had wrong notes, missing notes, so I was automatically correcting them, trying to see what else I could do."

Ljova has music and literature in his blood. His mother is a poet. His father has written more than 30 musicals, has his own TV show and, although classically trained, wrote Russia's first rock musical in 1975.

When Ljova was 3, his mother asked him if he'd like to play the violin. He quit the instrument at age 11, when the family moved to the U.S., and declared that he would write science fiction. Later, his father said, "Why don't you try to give viola a chance?"

Since then, Ljova has given the instrument many unique chances to take flight.

"I don't know if I really consider myself a classical musician anymore," he says. "I strive to be more of a folk musician. The guys who live in the villages, they have their own village music that they perfect. I like to think that I live in the greatest village for me, which is New York. We have all of these musical styles boiling in the same pot. That's tradition — my tradition."