Accessibility links
Do Hypoallergenic Dogs Exist? Maybe Not Malia Obama has allergies, so the incoming first family wants a dog she can tolerate. Is there really such a thing as a hypoallergenic dog? Maybe not.

Do Hypoallergenic Dogs Exist? Maybe Not

Malia Obama has allergies, so the incoming first family wants a dog she can tolerate. Is there really such a thing as a hypoallergenic dog? Maybe not.

It's All Things Considered from NPR News. I'm Andrea Seabrook. As we all know, the most difficult issue for the incoming First Family may be what kind of dog to get. The president-elect has said they're considering a puppy from a shelter but may want a purebred because 10-year-old Malia Obama is allergic to dogs. We sent NPR's Joanne Silberner to track down the truth about dog allergies.

JOANNE SILBERNER: You can find just about any dog you want at the Washington Humane Society. Adoption manager Diana Foley.

Ms. DIANA FOLEY (Adoption Manager, Washington Humane Society): You can see, we do tend to get a lot of variety of different mixed breeds, pure bred, small dogs, big dogs. We have all different kinds of dogs coming in. We usually have new dogs coming in every single week.

SILBERNER: Foley says people with allergies come in knowing what they want.

Ms. FOLEY: And they do come in looking for a low-shed breed like a poodle mix. They'd come in knowing that they want a dog that's not going to shed a lot that might irritate their allergies.

SILBERNER: But it's not the hair of the dog that causes allergies. Allergists say it's in the dander, the material that flakes off from the skin. Clifford Bassett is an allergist in New York City and yes, Dr. Bassett had basset hounds when he was a boy.

Dr. CLIFFORD BASSETT (Allergist, Immunologist, New York City): There are proteins that are carried from the sebaceous gland on the skin of the animal, and the particles can become airborne. They can become embedded in the hair or the fur. And the animal, as they groom and lick themselves, can wind up in the saliva or the mouth.

And these allergens, or proteins, when held, can trigger a variety of allergic reactions, both that affect the eyes, the nose, the throat, and even the chest or the skin.

SILBERNER: Catch that? It's the dog's skin, not hair, that's the problem. Some people can take care of the symptoms with anti-histamines or nasal sprays. Allergists disagree about the value of shots for dog allergies. Limiting exposure is good, keeping the dog out of the bedroom, using an air filter, no carpeting and cover your dog's ears now. Research has shown that bathing a dog twice a week significantly reduces shedding of those proteins.

Allergist Robert Wood of Johns Hopkins Children Center says there's an enormous variability in how good any single dog might be in provoking an allergic reaction.

Dr. ROBERT WOOD (Allergist, Johns Hopkins Children Center): That difference cannot be predicted by the breed of the dog, the size of the dog, the length of their hair, the amount of shedding, or any other factor that you might predict. It would have something to do with how much allergen the dog produces.

SILBERNER: He points to several studies that have a particular relevance to a family seeking a hypoallergenic dog. The studies all compared several breeds and came up with different answers. In one, poodles did best. But even among the poodles on that study, there was a thousand-fold variation.

Dr. WOOD: So it would have been a chance of great luck if they got that low-allergen-producing poodle, which might have worked out fine, and a disaster if they got the poodle that was a high allergen producer.

SILBERNER: So the bottom line is, there's just no predicting whether a purebred or a mutt is going to cause problems to someone with allergies. The Obamas have reportedly been offered a four-month-old puppy by the Friends of the Hairless Peruvian Dog. But that won't necessarily do the trick. If a dog has skin, and they all do, it's going to produce allergens.

Wood says, with a severe dog allergy, especially if it's complicated by asthma, bringing a pooch into the household isn't a good idea. But with milder allergies, Wood suggests getting a dog on a trial basis, finding a shelter or a breeder who will take a dog back after a couple of weeks if things don't work out. Joanne Silberner, NPR News. 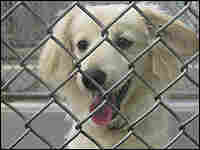 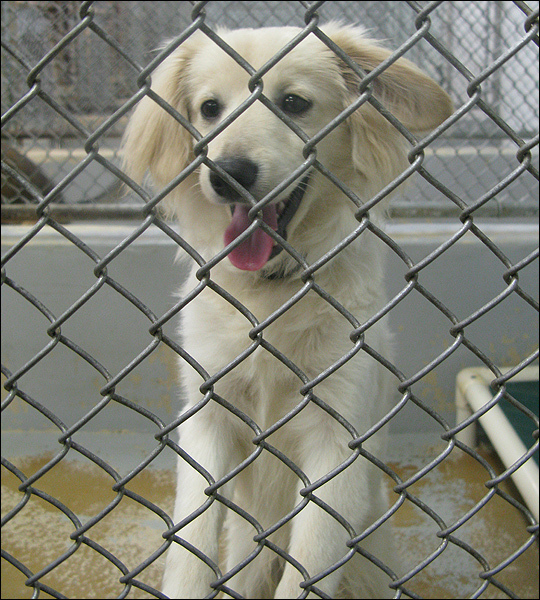 The Washington Humane Society sees roughly 4,000 dogs a year at its two branches. 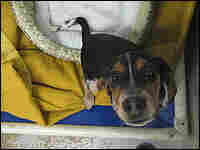 This puppy is one of many mixed-breed and purebred dogs that the society takes in each year. Kathleen Masterson/NPR hide caption 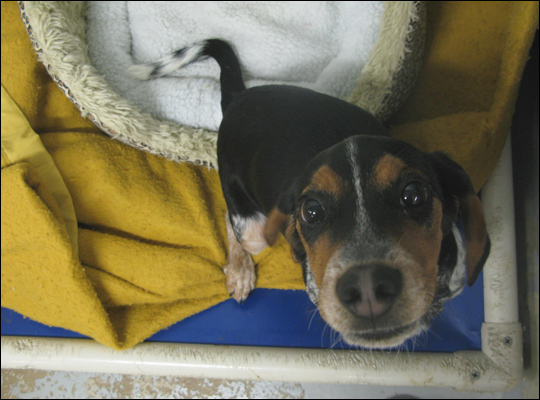 This puppy is one of many mixed-breed and purebred dogs that the society takes in each year.

When President-elect Barack Obama promised his daughters a puppy in his victory speech, little did he know the surfeit of political input that would issue forth regarding the new addition to the family.

The Obamas have expressed interest in adopting a furry friend from a shelter, but Obama's 10-year-old daughter, Malia, has allergies to dogs. Finding the perfect pup could be tricky, the American Academy of Allergy, Asthma and Immunology contends, because there is no such thing as a hypoallergenic breed.

Shaggy dogs often get a bum rap, but allergens are actually in skin, not hair, the academy explains. The amount of allergen dander varies drastically from dog to dog — even within each breed.

"Please don't believe the Internet that there is a breed or some variety of breeds that are going to be safe for you," says Dr. Robert Wood, director of pediatric allergy and immunology at the Johns Hopkins Children's Center, "because that clearly is not the case."

Regardless of allergists' advice, people with dog allergies insist that some breeds are more hypoallergenic than others, says Diana Foley, adoption coordinator at the Washington Humane Society. She says dog owners report that because poodles don't shed much, they cause less irritation to allergy sufferers than other breeds do.

Every Pup's Dander Is Unique

Several studies have shown a tremendous variability of allergen levels, even within breeds, Woods says. One study published in the journal Allergy in 2005 found that poodles had a huge range in the amount of allergen dander found in individual dogs. One poodle was a very low allergen producer, while another produced 60 times more allergens — almost the highest of all the breeds tested. The study measured the dogs' fur, not how much dander was found in their respective homes.

The study also found that the most allergen-laden Labrador retriever had a substantially lower count than the high-dander dogs measured in other breeds. Yet this comparatively low-dander Lab had 1,500 times more dander than the least-dandered Lab and 20 times more than the lowest German shepherd.

So What's The First Family To Do?

One solution is to find a flexible breeder or shelter and take a dog home on trial. Wood says an allergy sufferer should be able to tell within two weeks whether the dog will trigger a reaction. The Washington Humane Society sees 4,000 dogs a year, and its administrators say they're optimistic an excellent match for the Obamas could come through its doors.

Dog owners can control some household factors. Keeping the dog out of the allergic person's bedroom reduces animal dander in pillows and blankets, according to the academy. Replacing carpeting with hardwood flooring and using high-efficiency air filters also can help lower allergen levels.

And keeping the pup clean, with frequent baths, helps reduce the amount of dander shed.