Accessibility links
The Cajun Swamp Fire Of Feufollet Feufollet is one of several young Cajun bands trying to preserve tradition, add its own sounds and reach a new generation. The group has been doing that for a decade, even though most of its members are still in college. 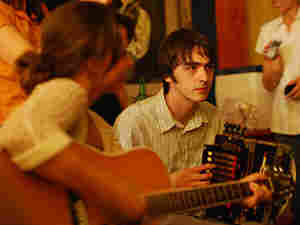 Lafayette, La., is a happening place. There, musicians young and old are pushing the boundaries of their genres.

Feufollet has been doing that for a decade, even though most of its members are still in college. Like its compatriots in the Pine Leaf Boys, the Lost Bayou Ramblers, the Red Stick Ramblers and several other local bands, Feufollet is trying to bring the sensibility of its generation to a much older style of music.

Feufollet translates literally from the French as "crazy fire." In southwestern Louisiana, it's used to refer to the will o' the wisp: the spectral, shifting light seen over the swamps at night. Fiddler and accordionist Chris Stafford explains that the band chose the name because folk tales came up with many different meanings for "wills o' the wisp."

"People had no idea what they were," Stafford says. "They were these balls of fire they'd see in the swamp. And they would make up stories to explain what a feufollet was."

Feufollet, the band, is a bit of a shape-changer, too. The musicians do lots of straight-ahead Cajun songs, and they clearly respect their musical heritage. But they've also been known to toss a version of the Talking Heads' song "Psycho Killer" into a live show.

Most of the members of Feufollet are too young to remember the Talking Heads' heyday. Nevertheless, the Louisianans started playing music early — very early. Chris Segura started going to hear Cajun music with his parents at the age of 2. He was playing fiddle by the time he was 4. At the ripe old age of 12, a friend hooked him up with Chris Stafford. Segura says that their first collaborations took place over the phone.

"We'd play for each other over the phone before we ever met," Segura says.

The two Chrisses — Segura and Stafford — became the nucleus of Feufollet. They added Stafford's brother, Mike, on drums. He was around 8 years old at the time Feufollet recorded its first album nearly 10 years ago. So the band's fans — and the older generation of musicians who've mentored the members of Feufollet — have all watched the band grow up onstage.

The enthusiasm of youth led to some playing around in the studio as they recorded their latest CD, Cow Island Hop. They ran some vocals and a guitar solo backward. They added a Mellotron, an early electronic keyboard, on one track. One of the musicians dug up a Creole song called "Femme l'a Dit" at the Archives of Cajun and Creole Folklore, where he was working. It was a field recording from the 1950s, so the band members say they felt free to adapt it as they pleased.

Some purists may wag their fingers, but Barry Ancelet, a professor of French and folklore at the University of Louisiana at Lafayette — and one of the deans of Cajun culture — says he isn't worried.