Accessibility links
Injured Troops Struggle to Get Health Care Tim Ngo sustained a serious head injury in Iraq. Yet despite Ngo's ongoing health problems, the military has determined he is ineligible for continued military health coverage. The Pentagon is granting fewer veterans disability payments today than it was before the Iraq war. 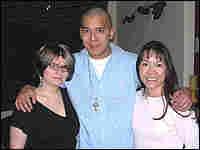 Tim Ngo (center) suffered a serious head injury while serving in Iraq. The military recognizes him as only "10 percent" disabled, which makes him ineligible for continued military health care. Above, Ngo stands with his girlfriend, Ani Cerghizan (left), and his mother, Hong Wyberg. Eamon Coyne hide caption 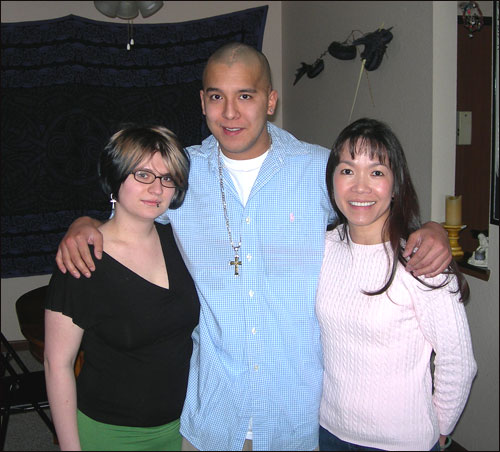 Tim Ngo (center) suffered a serious head injury while serving in Iraq. The military recognizes him as only "10 percent" disabled, which makes him ineligible for continued military health care. Above, Ngo stands with his girlfriend, Ani Cerghizan (left), and his mother, Hong Wyberg.

Gordon England, deputy secretary of defense, says there is no incentive for the Department of Defense to reduce disability ratings. "We try to treat people fairly and accurately," he said last week. Mark Wilson/Getty Images hide caption

When service members are forced to leave the military by war injuries or illness, they face a complex system for getting health and disability benefits. Sometimes, health care gets cut off when new veterans find they need it most. Some retired soldiers and their families say they are worried that the Pentagon won't spend enough money to give the injured the care they deserve.

Tim Ngo almost died in a grenade attack in Iraq. He sustained a serious head injury; surgeons had to cut out part of his skull. At Walter Reed Army Medical Center in Washington, D.C., he learned to walk and talk again.

When he got back home to Minnesota, he wore a white plastic helmet to protect the thinned-out patches of his skull. People on the street snickered, so Ngo's mother took a black marker and wrote on the helmet: U.S. ARMY, BACK FROM IRAQ. On this much, everyone agrees.

But here is the part that is in dispute: The Army says Tim Ngo is only 10 percent disabled.

When a service member is retired for medical reasons, the military's disability rating makes a difference. If Ngo had been rated 30 percent disabled or higher, he would have gotten a monthly disability check instead of a small severance check. He also would have stayed in the military's health-care system.

Instead, Ngo enrolled with the Department of Veterans Affairs. Typically, there's a waiting period for the VA.

In October, while he was uninsured, Ngo had a seizure, caused by his war injury. He remembers being outside and blacking out; he fell to the ground on the driveway.

"My girlfriend was freaking out because she didn't know what to do," Ngo says. "She didn't know if I was going to die because I had hit the wrong side of my head."

An ambulance took Ngo to the nearest emergency room for treatment. It cost him $10,000. Ngo says that today, the bills for the incident are still unresolved.

Since that day, Ngo has gotten health coverage through the VA. Earlier this month, the VA said it would pick up his leftover bills from the emergency room.

The VA has been more generous than the Army all around. It rated Ngo as 100 percent disabled compared with the Army's 10 percent rating.

The VA gives him a monthly disability check, which helps with his finances; his head injury and post-traumatic stress disorder have prevented Ngo from holding on to even a simple job since he returned home.

Ngo's mother, Hong Wyberg, says the Army gives soldiers such as her son low disability ratings to save money.

"I don't fully think they were prepared for the length of time this war is going to last," Wyberg says. "They had no idea of how many injuries or the type of injuries that were going to come out of this."

Michael Parker retired from the Army in October, and he thinks Wyberg's suspicion is correct.

"The more I looked into it, I realized that this system does not have the soldier's back at all," says Parker.

Parker was a lieutenant colonel when he retired last year. Today, he has a disabling condition similar to rheumatoid arthritis. Parker was able to get the Pentagon's lifelong health coverage for himself and his family; he had been in the military long enough — for at least 20 years.

But Parker saw that a lot of other soldiers weren't as lucky, and it inspired him to become an advocate.

"I started posting questions and concerns and opinions on various blogs," he says, "and it just kind of mushroomed from there."

Parker started digging through Pentagon data, and the numbers he found shocked him. He learned that the Pentagon is giving fewer veterans disability benefits today than it was before the Iraq war — despite the fact that thousands of soldiers are leaving the military with serious injuries.

Retired Army Lt. Gen. James Terry Scott heads a commission, set up by Congress, to study veterans' disability benefits. At a Senate hearing last week, Scott said that his commission had compared the way the Pentagon and the VA rated the same soldiers.

In other words, troops often get small disability checks and no military health care when rated by the Pentagon's disability boards. But when they go to a VA board — with the same injuries — they get much more.

Scott said one reason is that the military's ratings determine whether a person is fit for duty, whereas the VA looks at all conditions that create health problems for a veteran. So the VA ends up rating more disabilities per retired service member.

But Scott said another reason may be that the Pentagon wants to keep down its costs.

"It is also apparent that the Department of Defense has a strong incentive to rate less than 30 percent, so that only severance pay is awarded," Scott said.

These numbers yielded some tough questions for Pentagon officials at the Senate hearing, such as Deputy Defense Secretary Gordon England.

"How do you respond to [the] assertion [that] the Department of Defense reduces disability ratings as a cost-savings device?" asked Sen. James Inhofe (R-OK).

"I can tell you... there's no incentive to do that, senator," England replied. "I mean, maybe that's read into that. But I can tell you, we try to treat people fairly and accurately. And so there's certainly no incentive."

Pentagon officials conceded that the disability system doesn't work as well as it should. They admitted it is too bureaucratic and too often adversarial. They said they would listen to suggestions for change.

But change in the future will come too late for many soldiers.

April Croft was serving in Afghanistan when she was diagnosed with leukemia. She was treated for a year at Walter Reed. The cancer seemed to go into remission and she was sent home.

"They told her that she was only eligible for a 10 percent rating with the illness of leukemia," says her husband, Mark Croft. "She was livid. She's actually contested that situation about three times already."

The Army never increased its 10 percent rating, but the VA rated her 100 percent disabled.

Croft spoke from his wife's room in a VA hospital in Seattle, where she recently underwent a bone-marrow transplant.

"The VA originally gave her 50 percent and upped it to 100 percent once... she got sicker," Mark Croft explains.

The VA provided the life-saving operation April Croft needed, but the low rating from the Army still mattered: The VA only covers veterans, not their families. It is the military health-care system that will insure an entire family — but only if the vet has a disability rating of 30 percent or more. April Croft has two young children, who are living with their grandparents in California.

Her kids eventually did get military health care — but only recently, after their mother married Mark, who is still in the Army. Mark and April wed in Reno in March. Afterward, he was given leave from the Army. Instead of taking off for a honeymoon, the newlywed couple drove to Seattle and checked into the hospital.

It's the kind of complicated arrangement that many veterans must make to navigate the military's complicated disability system.