Accessibility links
Thanksgiving Treat: Special Cranberry Relish Every year as Thanksgiving approaches, friends ask NPR's Susan Stamberg for her mother-in-law's recipe for cranberry relish. The side dish combines the sweet tartness of cranberries with soothing sour cream — and gets a kick from a little horseradish. "It sounds terrible but tastes terrific," Stamberg says. 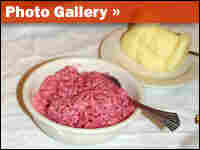 Every year as Thanksgiving approaches, friends ask NPR's Susan Stamberg for her mother-in-law's recipe for cranberry relish. The side dish combines the sweet tartness of cranberries with soothing sour cream — and gets a kick from a little horseradish.

"It sounds terrible but tastes terrific," Stamberg says of the dish — which, if made properly, takes on what many people have called a "Pepto-Bismol-pink" hue.

Despite the color, the relish should remain chunky — not pureed, Stamberg says. To help the flavors meld together, cooks should place the dish in the freezer overnight and remove it early Thanksgiving morning.

Even if it's prepared perfectly, this version of cranberry relish may not suit everyone's taste. "I've developed a very thick skin about this recipe over the years," Stamberg says.

Here's the cranberry relish recipe, along with a bonus recipe for another Stamberg favorite: garlicky cranberry chutney.

The relish will be thick, creamy and shocking pink. ("OK, Pepto Bismol pink.")

Cut ginger into paper-thin slices, stack them together and cut into really thin slivers.

Add can of cranberry sauce, salt and pepper. Mix and bring to a simmer. Lumps are OK. Simmer on a gentle heat for about 10 minutes.

In some audio versions of this story, we failed to include the amount of sour cream — 3/4 cup — to be added.