Accessibility links
After Bans, Tobacco Tries Direct Marketing For decades, tobacco companies advertised on TV, radio, billboards and magazine pages. When the 1998 tobacco settlement put an end to that, they began targeting smokers online and in person. Now the industry spends twice as much on marketing as it did 10 years ago.

Call For Philip Morris: A History Of The Tobacco Giant's Advertising Campaigns.

You can see more tobacco advertisements by contacting the Center for the Study of Tobacco and Society, or by visiting tobacco.org and tobaccovideos.com. 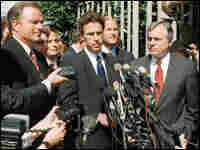 One of the major figures in the tobacco case is now governor of Washington, while another sits in a Kentucky jail. Read more about the people involved in the settlement. 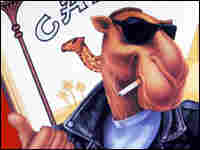 As part of the 1998 settlement, the tobacco industry agreed to do away with some its most famous advertising icons, such as Joe Camel. Courtesy of Tobacco.org hide caption 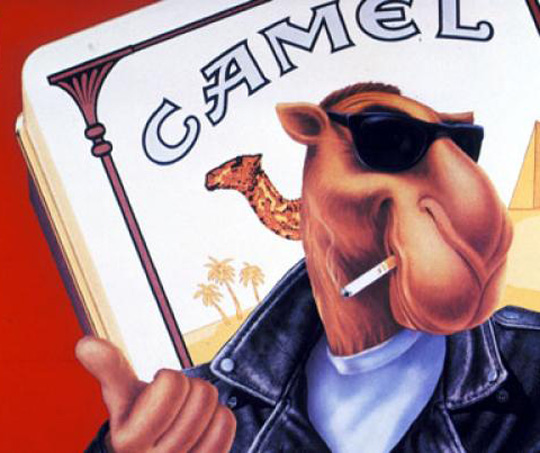 As part of the 1998 settlement, the tobacco industry agreed to do away with some its most famous advertising icons, such as Joe Camel.

Wednesday on Morning Edition, in the last installment of this series about the 1998 tobacco settlement, Debbie Elliott will consider the future of the tobacco industry with a visit to Philip Morris' Center for Research and Technology in Richmond, Va.

In previous reports, Elliott looked at what states have done with the tobacco funds and gave an overview of changes that have taken place since the settlement.

For decades, tobacco companies used cartoon characters to sell cigarettes. During the 1960s, Winston sponsored The Flintstones, and Fred himself sang the indelible jingle, "Winston tastes good, like a cigarette should." And for audience members who were too young to smoke, Flintstone candy cigarettes came in pink with Wilma on the pack and green (menthol) with Barney.

In 1971, Congress banned broadcast ads by tobacco companies — but it still allowed print and billboards.

"[Advertising] went on right through the 1990s," says Dr. Alan Blum, director of the Center for the Study of Tobacco and Society at the University of Alabama, home to a vast tobacco marketing archive. A family physician, Blum has spent his career documenting how, for generations, the tobacco industry made smoking appealing.

Ten years ago, much of that stopped. The tobacco industry agreed to do away with some of its most famous advertising icons.

"The Marlboro Man will be riding into the sunset on Joe Camel," Bob Butterworth said in the late 1990s.

Butterworth was Florida's attorney general, and the marketing restrictions were part of a $246 billion settlement between Big Tobacco and states that had sued the industry over the public health costs of smoking.

The settlement changed the way cigarettes are marketed. The public no longer sees tobacco advertised on billboards, or on taxicabs and buses. Sports sponsorships have been limited. And cigarette companies cannot use cartoon characters, or give away brand-name merchandise like T-shirts and backpacks.

Since 1998, smoking rates have dropped by 5 percentage points, falling below 20 percent for adults in 2007 for the first time since the government started collecting the data.

Still, the settlement gets mixed reviews. Blum says he does not see it as a watershed in the tobacco wars.

"To play this as some kind of victory over Big Tobacco really overlooks what it did and didn't do," Blum says. "It was a money grab."

Blum says the deal simply shifted money from tobacco companies to states — many of which then failed to use it to fight smoking. Instead, he says, the states became dependent on the funds to build roads or schools or repay debt.

But Mike Moore, former Mississippi attorney general and a lead negotiator in the deal, defends the agreement. He says if nothing else, the lawsuits brought to light the fact that tobacco companies knew that cigarettes were deadly and addictive. Still, he acknowledges the industry is a formidable opponent, especially when it comes to creating a market.

"They still have a marketing campaign," Moore says. "They're all over the place. They have other ways to do it. They're coming out with new products. They'll find a way to sell their product. Addiction is what they sell. It's an amazing process. Think about it. You sell a product. People get hooked on it. They have to have it. You're in business forever."

In the years since the settlement, tobacco firms have found new ways to reach customers. The companies are barred from sponsoring concerts, but on the Web, Philip Morris sponsors an American Idol-like band contest in a promotion called "The Best of Marlboro Country Music." There are promotions in night clubs, on college campuses, on the Internet and at the stores where cigarettes are sold.

"It's evolved to a more focused, direct one-to-one approach," says Bill Phelps, a spokesman for Altria, the parent company of Philip Morris, which is the world's top cigarette maker. "When was the last time you saw an ad for Marlboro? Marlboro is the biggest brand in the U.S., as big as the next 10 brands combined. I think there's still a perception that [people] see Marlboro advertising a great deal, but take a step back and think about it."

Phelps says the company tries to prevent exposure for unintended audiences, like children, by relying on direct marketing.

"Our database has more than 25 million names on it," he says. "Those are adults who already smoke and have said, 'I want to be on your database and receive information from you about your cigarette brands.'"

It all starts at smokersignup.com, which "has a system that enables us to verify who somebody is, who tries to sign up on the database, to make sure they are who they say they are and they are an adult," Phelps says.

Philip Morris uses the database to target smokers for discount coupons and even chances to win a vacation in what Phelps calls "experiential programs."

"Marlboro brand is often associated with Marlboro Country, and the great outdoors and the West," he says. "We own a ranch, and Marlboro smokers can win an opportunity to visit that ranch and experience Marlboro Country."

Marlboro now has a record 41.8 percent share of the U.S. cigarette market, up from 33.8 percent when the settlement was signed. Overall, tobacco companies spend more than $13 billion a year on advertising and promotions, nearly double what they did in 1998.

Another result of the tobacco settlement was the creation of the nonprofit American Legacy Foundation to fight smoking, requiring the tobacco industry to pay the organization $1.7 billion over 10 years. The foundation runs campaigns to discourage teen smoking.

"We try to make it possible for young people to rebel by rejecting Big Tobacco as opposed to rebel by becoming a smoker," says Legacy President Cheryl Healton.

In one Legacy TV commercial, a cowboy rides into New York City traffic on a white horse and pulls a bandanna from his neck, revealing a big hole that he then sings through:

In another ad, teenagers dump 1,200 body bags in a pile outside a cigarette company's office — the number of people who die every day of tobacco-related diseases. These kinds of edgy messages are effective, but Healton says that the foundation's annual budget of $55 million is dwarfed by Big Tobacco's resources.

"When you consider that the tobacco industry spends about $36 million every day marketing its product in the U.S. alone, our Truth campaign buy is roughly equal, for example, to one day of their marketing effort," she says. "So it's truly a David vs. Goliath battle."

But, Healton adds, "We have truth on our side."