Accessibility links
Burmese Refugees Preserve Culture Through Music After coming to the U.S., many Burmese refugees try to preserve their culture and music with traditional instruments and dance. Most of these musicians have not seen their homeland in 20 years, while the younger ones were born in the camps, citizens of no country. 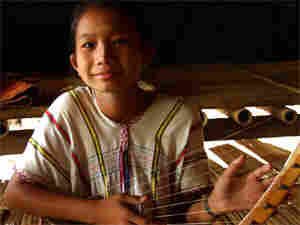 Many Burmese musicians haven't seen their home in years. This young thana player, like many others, was born in the refugee camp, a citizen of no country. Jack Chance/NPR hide caption

Before Burmese refugees come to the U.S., they hold camp on the Burma-Thailand border. There are signs with pictures of hamburgers, Santa Claus and Joshua Tree National Park. It's sort of a pre-"Welcome to America." The U.S. accepted nearly 14,000 Burmese refugees in 2007, mostly from the Karen ethnic group. More are on their way.

When refugees do eventually come to the U.S., they bring with them the most important parts of their culture — their religion, their food and their music. The Burmese play on instruments such as the thana, a small wooden harp, and tell ancient love-story tragedies through song.

Producer Jack Chance went searching for traditional music of the Karen people. Click the audio link to hear him share what he recorded in refugee camps along the Thailand-Burma border and in the refugees' new American homes.