Accessibility links
After Years, Sondheim's 'Road Show' Pulls Into N.Y. Stephen Sondheim's new musical has been around in various forms for a decade or more. But Broadway's living legend says his fascination with the scandalous story of the Mizner brothers goes back 50-plus years. 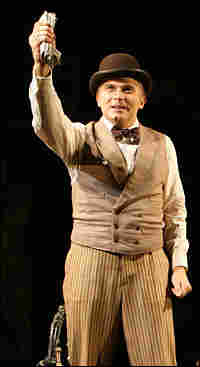 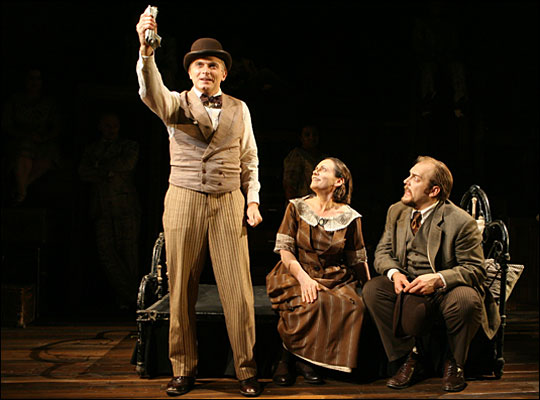 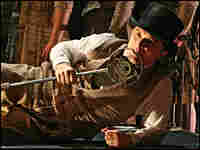 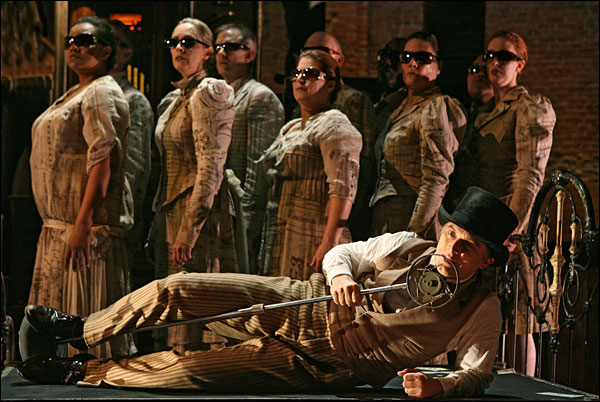 Cerveris says Wilson's "seductive, exciting" energy is inextricably tangled up with his amorality — and his "maverick spirit ... that renegade, go-make-things-happen" attitude.

Sondheim On The 'Boca Bubble'

Weidman On All Those Trunks

Doyle On Money And The American Dream 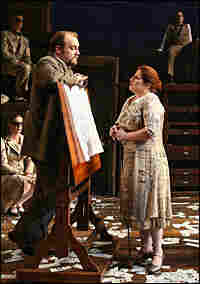 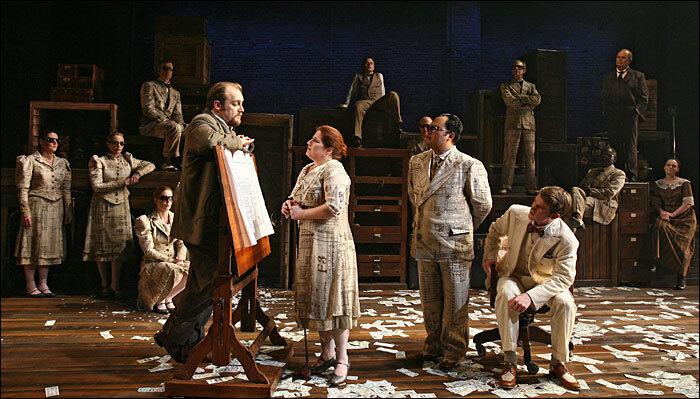 Alexander Gemignani (left, with Anne L. Nathan, Orville Mendoza, and Claybourne Elder and the Road Show company) plays Wilson's architect brother Addison — a less unscrupulous man who nonetheless gets caught up in more than one of Wilson's scams.

Stephen Sondheim, the legendary Broadway musical composer and lyricist behind shows like West Side Story, Sweeney Todd and Sunday in the Park with George, likes to joke that his latest show has had a very long out-of-town tryout.

There was a workshop, under the title Wise Guys, in 1999. There was a 2003 production in Chicago and Washington, D.C., when the show was being called Bounce. Now, as Road Show, the musical is finally opening at the off-Broadway Public Theatre.

But if Road Show's New York opening has been almost 10 years in the making, the idea for it goes back even further, to when Sondheim was just 22 years old.

"It's 56 years since I first read Alva Johnston's book," he laughs.

The book was called The Legendary Mizners, and it was a biography of two brothers whose adventures — from prospecting for gold in the Yukon in the 1890s to participating in the land boom and bust in Florida in the 1920s — reflected a certain kind of American can-do spirit. (With, to put it mildly, some unsettling undertones.)

Addison Mizner was an architect who helped create Florida's Palm Beach. His brother, Wilson, was a larger-than-life character: a cocaine-addicted gambler who managed prizefighters, collaborated on Broadway plays, and got involved in all sorts of illegal schemes, including swindling his own wife.

"He was essentially not a good guy," Sondheim says. 'He was a scam artist and a crook, but apparently he had great charm, and he was a great promoter. So, anyway, he — he fascinated me."

So much so that the young Sondheim saved his pennies so he could take an option on the book, intending to adapt it as a musical.

"And found out, to my chagrin, that the option had been picked up a few weeks earlier by a producer named David Merrick," he remembers. Irving Berlin was in on the deal, too. "And they were going to make a musical of it, starring Bob Hope as Wilson."

So Sondheim dropped the idea. But eventually, as it turns out, so did Irving Berlin. And about 14 years ago, Sondheim approached librettist John Weidman, with whom he wrote Pacific Overtures and Assassins, about picking up the Mizners' story.

Weidman was intrigued — and not just by Wilson.

"I was interested in the relationship between the brothers," he says. Another attraction for the librettist: the story's period — "this sort of raw, unregulated period in our history, through which they careened through the several decades of their lives."

Much like the brothers, Sondheim and Weidman careened through a writing process that had some wild ups and downs — including lawsuits with a producer. But they kept on returning to the show, kept on writing and rewriting.

"I've written so many more songs for this show than any other show I've ever been connected with," Sondheim says. "Usually, there are two or three songs on the average that don't get into a show, or get cut out, or whatever — finished songs — but this one ... there are a couple of dozen."

In the earlier version called Bounce, for instance, a song called "The Best Thing That Ever Happened" anchored a love story between Wilson and a character named Nellie — a gold digger he met in an Alaska saloon.

In Road Show, the Wilson-loves-Nellie plot has been completely discarded — and the song is now sung by Addison and his lover, a rebellious young rich kid named Hollis.

John Doyle, who staged celebrated revivals of Sondheim's Sweeney Todd and Company, is directing Road Show. In collaboration with the authors, he's pared what was once a two-act show down to an intermissionless one. The Scottish-born director says Weidman and Sondheim have been uncommonly flexible.

"They've been living with it for a long time," Doyle says, "and that's hard. ... So they were very open about, 'Let's see what else we can do,' or 'Do you have a production in your head that you can see when you read this material?' — which I did, actually, quite early on."

That production, for which Doyle also designed the set, plays out amid a clutter of steamer trunks, cabinets and drawers — apt metaphors for characters whose adventures took them to all corners of the country. The actors climb all over it, pulling out props; as the play progresses, the stage gets littered with ripped-up blueprints — and lots and lots of fake money.

A Little Wilson In All Of Us

Broadway star Michael Cerveris loves playing a character as dark and complex as Wilson Mizner. And he knows there's a little bit of Wilson in all of us.

"The faces of the audience, when they see money going in the air — it's an unconscious glee," Cerveris says. The actor gets a charge, night after night, out of "watching it fall on them and watching them deal with, you know, if they're gonna pick it up. They know it's not real, but there's a part of them that thinks maybe it could be. And so they check out the dollars and it's just great, and it says maybe more than anything else about us."

Sondheim and Weidman have continued to tinker with the show throughout its preview period — even adding a new number just a week before opening night. But ask Weidman if the show is finished, and he'll quote a famous director.

"I guess it was Jerry Robbins who said, you know, 'Musicals are never finished, they're abandoned.' It reminds me of college exams, where you're writing furiously in the blue book until somebody says 'Time!', and then you have to put your pencil down."

But Sondheim says he and Weidman both agree on one thing: "Whatever people think of it, this is the show we want. And we've never had that privilege before; we've never seen the show that we intended. Now we do."