Accessibility links
Economic Slowdown Tests Dayton's Job Center The Job Center in Dayton, Ohio, is busy these days. It's a one-stop center for help with food stamps, Medicaid, resumes, employment searches and classes for new skills. Forty-three agencies are under one roof. 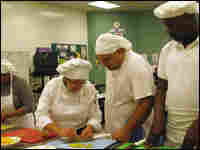 Chef Dawn Callison teaches Ricky Sells how to properly use a knife as she cuts oranges. Noah Adams/NPR hide caption 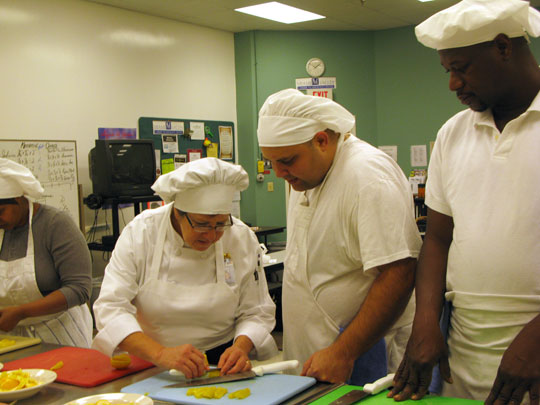 Chef Dawn Callison teaches Ricky Sells how to properly use a knife as she cuts oranges.

The Job Center in Dayton, Ohio, is busy these days. It's a one-stop center for help with food stamps, Medicaid, resumes, employment searches and classes for new skills. Forty-three agencies are under one roof.

It's a much needed center — and the largest in the nation — for a city has an unemployment rate that's nearly 8 percent.

For The Unemployed In Dayton, Help In One Stop 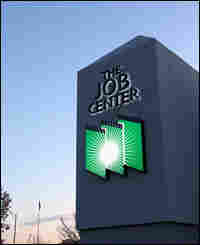 The Job Center in Dayton, Ohio, is designed as a "one stop" employment and training center. Noah Adams/NPR hide caption 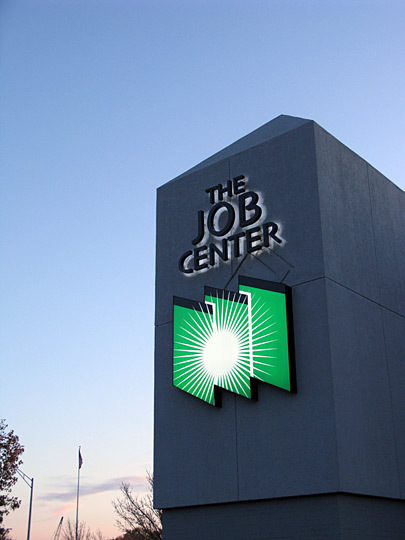 The Job Center in Dayton, Ohio, is designed as a "one stop" employment and training center.

Inside the Job Center in Dayton, Ohio, the out-of-work ponder the possibilities. They scan the fliers on a wall: There's a part-time delivery job with FedEx Ground. But you have to be able to lift 75 pounds! Or, they could go to Alaska to process seafood at Dutch Harbor for $7.15 an hour — the offer promises free transportation from Seattle.

How about "Leaf Pickup Assistant"? The job pays $8 an hour. "That's not bad," Jeff Hunt tells me as he looks over the offers. It's four to six weeks of work, and you must have the "ability to obtain steel toe work boots."

"I'd do that; I'd love outside work," Hunt says. "I could even ride the back of a garbage truck." But for those jobs, you need a driver's license. Hunt says he was caught driving drunk and without his license and now needs $3,000 to pay the fines. "So you see my problem," he says. "I can't make the money to get a license without a license."

Amid the economic crisis, a whopping 1.2 million jobs have been lost this year, and the unemployment rate pushed to a 14-year high in October. Dayton's Job Center, the largest of its kind in the country, offers training and support — and an example of how communities are trying to help workers get back on their feet.

In another part of the Job Center, I meet Jeff Vanderpool, who is training to be a "State-Tested Nurse Aide." He's wearing white for his classes. His previous uniform was desert camouflage.

"I just got back from Iraq about a year ago," Vanderpool says, "and worked for General Motors when I got home and decided once I got laid off there, I wanted to do something to help people, and decided this course would be good, so I can get into the hospitals and work."

Vanderpool plans to enroll at Wright State University in the spring and begin a four-year program to become a registered nurse. He's giving up on the auto industry, seeing more stability in health care.

Looking at just the recent turmoil at General Motors in Dayton would support his decision. The company laid off 1,000 workers in September, eliminating an entire shift, and now says it will close the plant for good two days before Christmas — that's an additional 1,400 out of work.

Vanderpool's time in the industry was short, but many of the GM autoworkers have decades on the job and face a tough transition.

"Understand this," counselor Sam Wainscott says, "they were the princes of the community. If you were a parent, you wanted them to date your daughter. If you were a brother, you wanted them to marry your sister, because they drove a neat truck, they got a new one every couple of years, they went to Myrtle Beach on vacation. And now the entire structure around them is going away; they're just terribly disoriented."

I did meet one very determined former GM worker at the Job Center. He was taking a break from his evening GED class. He quit high school to be an autoworker and now, 20 years later, needs a new career. He wants to run his own heating and air conditioning company. To do that, it's the GED track into college and the tech certification he'll need.

Dayton's Job Center is designed as a "one stop" sign-up for job training and food stamps in the same place. There's even a thrift shop with Christmas merchandise already marked at half-price. You can buy a nice wreath with a red velvet bow for $1.49.