Accessibility links
Mrs. Leary Offers 'Outtakes From A Marriage' Ann Leary's new book is about a woman whose husband (a TV star) may be cheating on her. In real life, Leary is the wife of comedian and actor Denis Leary. She says that while the main character bears a resemblance to her, the book is not entirely based on fact.

Ann Leary's new book is about a woman whose husband (a TV star) may be cheating on her. In real life, Leary is the wife of comedian and actor Denis Leary. She says that while the main character bears a resemblance to her, the book is not entirely based on fact.

Leary's 2005 memoir An Innocent, A Broad is about giving birth to her son Jack while on a week-long comedy tour in London.

Excerpt: 'Outtakes from a Marriage' 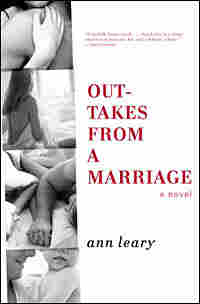 The two words rose above the restaurant din from one of the tables behind me, rose up and out of the dull white drone of late-night chatter and the chink of fork upon china and the distant half-drowned tracks of a forgotten Hindi-jazz CD. Had they been any other two words, they might have become part of the ambient clamor that surrounds each table at Pastis like a protective garment, allowing its occupants to speak of love or desire or deals or just to leisurely gossip, as Karen Metzger and I had been doing for the past five minutes. It was Wednesday night at Pastis, we were celebrating Joe's Golden Globe nomination with the Metzgers, and the guys had gone outside for a smoke.

"This is amazing, Julia, you have to try it," Karen said. She was hacking away at a mound of hard hazelnut ice cream. "Here. Try it," she said, tapping the plate with the tip of her spoon. Then she carved out one more little bite for herself.

"I just saw him, he's standing outside smoking. Right outside the door." It was the same man's voice behind me, eager and disbelieving.

"I know. We saw that guy, but we don't think it's him. He looks too small." This was a girl. A tipsy girl. And young, that was clear. She divided the word small into two syllables and then dropped the second syllable an octave, just the way my daughter, Ruby, and her friends did when they spoke to one another.

I shot Karen a look of startled amusement but she hadn't heard him. She was shaving tawny ice-cream crescents onto her spoon and reexamining, in a tone that was rising with shrill indignation, the "perfect storm" that had swept her husband Brian's just-released film to the bottom of the box-office charts, where it clung, battered by reviewers, looking for a dignified and timely route to next season's DVD releases.

"The studio was out to lunch on this one," Karen said. "And Sophie Wilkes just can't act. A director can only do so much."

"I don't know, I think she's all right," I said. "Everybody liked her in that movie about the teacher. Didn't she win the Oscar?"

"That was a fluke. She's awful. Why aren't you eating this?" Karen pushed the ice-cream plate to my side of the table and then she stared at it, wistfully.

Karen took one last swipe at the ice cream and then she plunged her arm up to her elbow into the oversized Balenciaga tote that hung from the back of her chair. She probed the depths of that three-thousand-dollar handbag, biting her lip and staring straight ahead, and I was reminded of a young English veterinarian I had recently seen on a television show, struggling to extract an unborn calf from the womb of its desperate mother.

"I can use Joe's phone when he comes back," I offered.

Karen frowned for a moment, thrusting her arm slightly deeper, and I could see the bulge of her knuckles as they rolled along the supple leather walls of the bag. There was the muffled tumbling of keys and coins and then she extracted the phone triumphantly.

"And I told Brian not to cast John Gregory Mason. He's just too gay. Nobody believes him when he plays a romantic lead." Karen held the phone at arm's length and squinted at the screen. Then she handed it to me.

"Wait. I know somebody who dated him. A girl."

"No . . ." I said, laughing helplessly, but Karen interrupted me. "When they were shooting the scenes in Thailand, John had a parade of local working boys wandering in and out of his trailer every day. Ask Brian!" she said when I gave her a look. "And listen to this. We invited him out to Southampton one weekend and he brought tasteful gifts for me, the kids . . . even the dog." Karen was whispering now because Joe and Brian were heading back to the table.

"What straight man is that thoughtful?" she murmured as I began to punch out my phone number.

The Nextel recording prompted me to enter my security code, and as I tapped it in, I watched Brian and Joe make their way through the crowded room. I recall, now, that Joe wore his "Yes, it's me" expression—a shy half-smile, his gaze fixed just above the nudges and hungry glances that carried him along like a gentle wave. From behind me the man said, "I toldja! Joe Ferraro," and then Joe Ferraro himself, grinning broadly now, slid into the chair beside me.

"Jesus Christ, we could hear you girls cackling all the way outside."

"I love it," said Karen. "We were cackling, Julia, like a pair of witches."

"I prefer sorceress," I said, kissing Joe on his lips. "Somehow it sounds so much more attractive than witch."

"They both sound evil. And sexy," said Joe. "Who are you calling?"

"My voice mail. I just want to see if Ruby or Catalina called. . . ." I stopped talking then because the first message was playing.

Who? The voice was Southern, I knew that at once. Just from those two words I knew.

"Thanks for the message. I can't believe you had to ask if I'm happy, baby, you know I am. Where are you, Joey?"

I leaned away from Joe and he raised an eyebrow. "Everything all right?"

"Is it Catalina?" Joe asked, and I nodded again, still listening.

Joe turned to Karen and Brian. "You know, the first night Catalina babysat for us we thought she stole Ruby?"

My face burned. I felt waves of what must have been blood and adrenaline surging across my chest, shooting upward and then pounding against the top of my head. I was vaguely aware that Joe had launched into his "how we thought Catalina stole Ruby" anecdote. It's one of his favorites.

Excerpted from Outtakes from a Marriage by Ann Leary Copyright © 2008 by Ann Leary. Excerpted by permission of Shaye Areheart Books, a division of Random House, Inc. All rights reserved.