Accessibility links
Why Do Pirates Have Us Hooked? Americans are fascinated by pirates: swashbuckling, salt-soaked seafarers who sport blousy shirts, spiffy vests, leather boots, eye patches, peg legs and the occasional parrot on the shoulder. But will the recent hijackings by Somali pirates make them not so lovable? 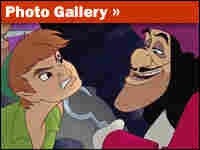 A Passion For Pirates 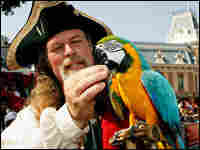 A man poses before the premiere of Walt Disney's Pirates Of The Caribbean: At World's End on May 19, 2007, in Anaheim, Calif. Vince Bucci/Getty Images hide caption 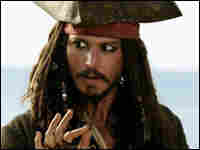 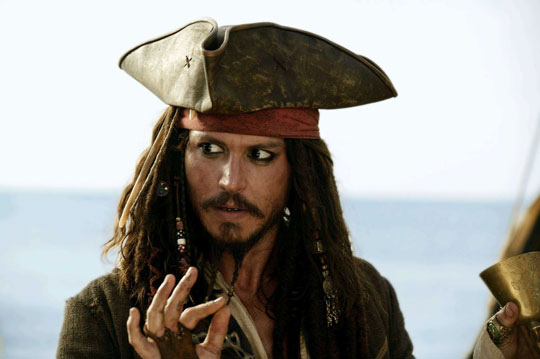 Johnny Depp as Capt. Jack Sparrow in Pirates of the Caribbean.

Pirates arrr among us!

Americans are fascinated by pirates: swashbuckling, salt-soaked seafarers who sport blousy shirts, spiffy vests, leather boots, eye patches, peg legs and the occasional parrot on the shoulder. There is romance in burying booty marked by a bloody X on a map and in making enemies walk the plank.

There is something so timeless about piratical behavior — living the lawless life, stealing from the rich, sticking it to "The Man."

Now come the Somali pirates, parading through the news: neo-buccaneers from the Horn of Africa wreaking unholy havoc on international shipping lanes. The Somali pirates have hijacked more than a dozen ships and crews, including a Saudi Arabia-owned supertanker laden with crude oil. They want $10 million in ransom for the tanker. That will buy one big bottle of rum. And, arguably, make pirate-lovers think twice.

There's a proliferation of piracy around the world. Pillagers and plunderers ply the waters of the planet, mostly in the lower latitudes — off the coasts of northern South America, on either side of Africa and throughout Asian seas — attacking hundreds of vessels every year.

The motivations for present-day pirates, says Donald G. Shomette, author of Pirates on the Chesapeake, are the same socioeconomic forces that have driven people to become pirates for centuries.

"Piracy is pretty much on the lowest end of the food chain in terms of morals and law and everything else," Shomette says. "Pirates come from the bottom end of the societal order. It's a chance for people who have no chance of advancement to advance. It's a way out."

"The outlaw, the bad guy is almost always the most interesting character in a story," says Shomette. Pirates "let us take a look at our darker side."

The pop-cult obsession with piracy dates back even before Robert Louis Stevenson's classic 1883 tale Treasure Island. Shomette says it all started with a 1724 book by Capt. Charles Johnson (perhaps Daniel Defoe writing under a pen name) titled A General History of the Robberies and Murders of the Most Notorious Pyrates. The author interviewed pirates and painted a world of skullduggery on the high seas.

Over the years, American cinema has glorified piracy, thanks to legendary actors such as Errol Flynn and Burt Lancaster. Steven Spielberg cashed in on the action with Hook. And Disney, seizing on piracy preoccupation, produced smash movies such as Treasure Island and Peter Pan before hitting the jackpot with the Pirates of the Caribbean films.

But eventually, as piracy proliferates, questions arise: Are pirates just terrorists with good publicity? If this new wave of pirates interrupts the global oil flow, will American kids continue to wear fake beards and hand hooks at Halloween? Will middle-aged men sing along with the Jimmy Buffett favorite "A Pirate Looks at 40"?

Yes I am a pirate, two hundred years too late / The cannons don't thunder, there's nothing to plunder / I'm an over 40 victim of fate

Or will the Somalis do for pirates what Jurassic Park did for dinosaurs — make them not so lovable?

"Part of the fun of playing with the images of the classic, golden-age pirate is that it's fantasy, but fantasy with an edge," says John Baur, 53, co-founder of Talk Like a Pirate Day. Baur is an American writer living in St. Croix. "The kinds of things that happened this week in the Indian Ocean, well, there's nothing fantastic about it."

He says that historian Marcus Rediker called the classic 16th and 17th century pirates — the kind Charles Johnson interviewed — "the freest people on Earth." And, Baur adds, "that's what appeals to people about pirates. Not the pillaging or plundering or killings. ... It's the freedom to once in a while say, 'Arrrr! To hell with convention! I'm going to misbehave today!' "