Accessibility links
As I Grow Old David Greenberger has made a career of talking with old people and sharing their stories in books, magazines and CDs. He believes the elderly friends he's made over time are teaching him how to grow old.

Listen
As I Grow Old 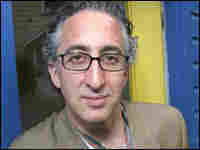 David Greenberger's self-published magazine The Duplex Planet has evolved into a collection of books, lectures and CDs exploring his interviews with old people. Greenberger has a BFA from the Massachusetts College of Art, and lives in upstate New York. Joe Putrock hide caption

I believe in learning about growing old by meeting people who are already old.

Thirty years ago, visiting my grandmother, I met a man named Herb Feitler. He and I spent the better part of a day together, going to flea markets and into the desert communities around Palm Springs. I was in my early 20s, and driving around with this 80-year-old guy at the wheel of his enormous Oldsmobile seemed to me like the height of exotica. Later I realized what made the experience so novel: He was the first old person I'd spent time with who wasn't in my family.

In the late 1970s I worked at a small nursing home. Most of the residents were at least three times my age. Now, nearly 30 years later, I never encounter anyone even twice my age. But I continue to meet and befriend elderly people.

It's a mistake to think that old people have special secrets to impart or pearls of wisdom to hand out. Pearls are a rare commodity and you have to work to find them. The most valuable thing for me has been getting to know my elderly friends in the moment — wherever the conversations may lead — rather than through often-told stories from their past. Tales of events before my birth won't necessarily help me know someone better.

That's part of the wonder of relationships: Anything that happened before we knew each other is slightly mysterious. It's only the present we can know. And a conversation in the present is given shape by the lifetime of events and ideas that preceded it. There's no need to go fishing for the past; it will make itself known.

When he was in his 60s, after my father suffered a stroke, he started going to an adult day center. Instead of being around people who viewed what had befallen him as tragic, he met a new group of people who didn't know him before. They understood that the way he was now — needing assistance when he walked, speaking softly — was not the way he had always been. But they simply accepted him as he was. This was liberating for him. Even though his range of movement was smaller and his voice far quieter than it had been, his health was bolstered by these new relationships.

As I grow old, I know issues that were once of great concern to me won't seem important anymore. I believe that having something new happen, no matter how small, is what makes for a healthy day, no matter how many days may be left.