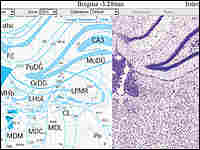 A new digital guide to the rat brain could help researchers solve a problem that slows down many experiments — where in the brain am I?

When scientists send a probe into the brain, or cut a slice of brain tissue to study on the microscope, sometimes it's really tough to figure out exactly what part of the brain they are looking at.

The new virtual road map of the rat brain allows scientists to navigate through the brain on their computer. Unlike the old brain atlases, this program lets scientists explore the brain as it is: in 3D.

Until now, researchers have depended on massive bound atlases to help them figure out exactly what part of the brain their probe is in, or identify the origin of a slice of tissue under the microscope.

But these bound print volumes only offer two-dimensional views of the rat brain. And researchers may have to leaf through dozens of pages to find a photograph of brain tissue that precisely matches the one they're studying. Often they are uncertain where a probe needs to go or what part of the brain they're seeing on a slice of tissue under a microscope.

All that slows down experiments that might find a treatment for Alzheimer's or explain precisely how addiction affects the brain. These experiments are often done on rats, because they share many brain structures with humans.

So Elsevier, a company that publishes some of the most widely used brain atlases, is developing a digital version in collaboration with the Allen Institute for Brain Science.

"We want to be the Google Maps for neuroanatomy," says Johannes Menzel, who is in charge of the project for Elsevier.

The BrainNavigator will allow researchers to take pictures of brain tissue from their own experiments and use the program to identify specific structures.

It also provides three-dimensional views, so scientists can call up a structure like the amygdala and rotate it on screen. That means researchers who are trying to reach a specific part of the brain can calculate precisely how deep they need to go.

Jean-Marc Fellous, a psychologist at the University of Arizona, says the BrainNavigator could help him place electrodes deep in the brain.

He also thinks it will be a great help to students.

"It will be like a game for them," he says. "They can rotate the image in 3D. So they'll have a much better visual picture of what is happening."

Elsevier is planning versions that will allow scientists and students to navigate the brains of mice, monkeys and humans.

An Exploration Of 'The Migraine Brain' Nov. 4, 2008
Mapping The Mysteries Of The Brain's Two Halves July 25, 2008
Understanding Brain Development In Children June 26, 2008