Accessibility links
Can Plug-in Cars Energize The Auto Industry? Experts discuss the future of electric cars, and whether bailout money with "green strings" attached might jolt Detroit into focusing on plug-in and hybrid cars. Find out about Tesla's slick plug-in sports car and a hybrid handcrafted for even more savings at the pump.

Experts discuss the future of electric cars, and whether bailout money with "green strings" attached might jolt Detroit into focusing on plug-in and hybrid cars. Find out about Tesla's slick plug-in sports car and a hybrid handcrafted for even more savings at the pump.

Daniel Sperling, director of the Institute of Transportation Studies, University of California, Davis; member of the California Air Resources Board, automotive seat 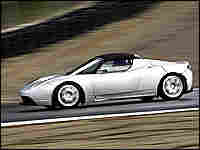 Tesla's Roadster can accelerate to 60 mph in 3.9 seconds. It's like a slingshot, and just as quiet. Courtesy of Tesla Motors Inc. hide caption 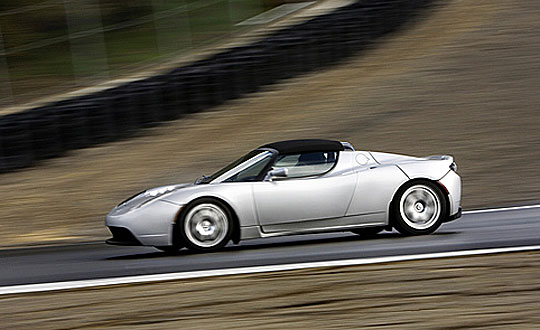 Tesla's Roadster can accelerate to 60 mph in 3.9 seconds. It's like a slingshot, and just as quiet.

The Tesla Roadster can go up to 244 miles on a single charge, thanks to its 1,000-pound battery pack. John McChesney/NPR hide caption

The Tesla Roadster can go up to 244 miles on a single charge, thanks to its 1,000-pound battery pack.

Even as America's troubled automakers seek a handout from Congress, a relatively new car manufacturer that's tailor-made for the 21st century is trying to get traction.

In an upscale showroom in Menlo Park, Calif., a low-slung, sleek, black sports car crouches on the floor. Manager Jeremy Cleland shows off some features of the 2008 Tesla Roadster.

"Now, this car here is 100 percent electric, operates off a lithium ion battery pack," Cleland says. "It has 6,831 commodity cells. We get 244 miles per charge with this vehicle. And it actually charges back up to full in about 3 1/2 hours."

Cleland calls them commodity batteries, because they're readily available. They're just like the ones you find in laptops. That kind of battery made this car possible.

The Roadster was largely the brainchild of Martin Eberhard, who developed the first electronic book reader back in the 1990s. He co-founded Tesla Motors in 2003 and now serves on the company's advisory board. When Tesla started, "there was two things that everybody knew about electric cars: one was that they sucked, and the other was that they were dead."

They were dead because California, under pressure from Detroit, had dropped the electric car from its zero-emissions mandate, and the Big Three manufacturers — Ford, Chrysler and General Motors — immediately shut down their electric-vehicle operations. GM recalled and crushed all of the cars it had dubbed the Ev1.

At about the same time, Eberhard had decided that electricity, rather than hydrogen, was the propulsion fuel of the future. He and his co-founders decided to target a niche not occupied by Detroit. Their goal was to "create a new segment of high-performance sports cars for people who loved them — but also for people who actually care about oil consumption, who care about their footprint on the Earth," Eberhard said. "And with that, if we succeeded, we would build a brand that allows us to move into other segments of the market."

With a carbon-fiber skin made in France, an aluminum frame made by Lotus in England and batteries made in Asia, the Tesla Roadster was born.

Today, the shells are flown in across the Atlantic, and the power trains are installed here. There's no assembly line yet for the company, which is producing roughly 15 vehicles a week and expects to increase that figure to 30 by early 2009.

Here's what production looks like now: Three workers roll around on stools under a car, lifting the 1,000-pound battery pack into place. After the batteries comes the drivetrain: an electric motor attached to the transmission. Each remarkably small, gleaming motor, lined up with others on a bench, is about the size of a big watermelon.

It's the "highest efficiency motor in the world for this application," says Elon Musk, Tesla's CEO. "Our motor is capable of putting out 300 horsepower, but if you were to look at an industrial 300-horsepower motor, it would be the size of a refrigerator."

Fast Start On The Road, Not In Sales

A test ride, with company publicist Rachel Konrad at the wheel, shows what this $110,000 machine can do.

A few beeps tell you the car is on; the engine is so quiet, you wouldn't know otherwise. It has a single-speed transmission that can accelerate from 0 to 60 mph in 3.9 seconds. Step on the gas and it's like a slingshot — and just as quiet. There's no exhaust blast, just a gutsy whine when you floor it.

Tesla has delivered just 70 Roadsters. It aims to produce 1,500 next year and to begin producing a lower-priced sedan in 2011.

But the company is struggling. It had to lay off workers recently.

Dan Neil, who writes about the automotive industry for the Los Angeles Times, says Tesla "has dramatically changed the mental landscape of the electric car. And it was a fascinating proposal: An electric sports car — use the sex and glamour and cachet of sports cars to push this technology forward, and then generalize it with a family sedan."

But Neil is skeptical that the company and its crew will be able to deliver on the Tesla dream.