Accessibility links
Tracking Jewish History Through Vinyl Albums In a new book, authors Roger Bennett and Josh Kun detail American Jewish history through vinyl albums. They are trying to answer questions such as, "Who are we?" and "What are we inheriting?" in what Bennett calls the "beginning of a journey."

Kun And Bennett Discuss How They Find The Albums 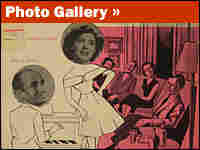 Where Shall I Go 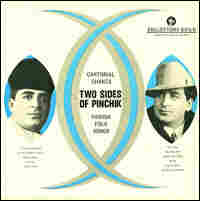 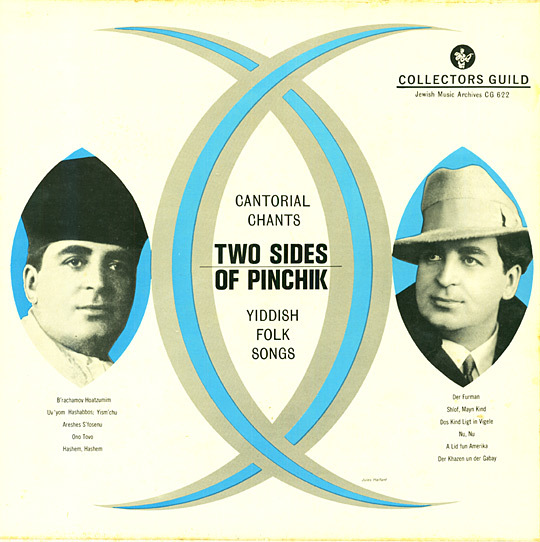 Authors Roger Bennett and Josh Kun wrote And You Shall Know Us By The Trail Of Our Vinyl, which details Jewish vinyl album covers they have collected over the years. Jewish, in these terms, includes everything from the prolific cantor Sol Zim to the Temptations' Fiddler on the Roof medley.

The kindred spirits found each other in 2003 as they searched for their own Jewish identities and dug through stacks of albums. They pooled their collections — word got around — and soon their garages were overflowing with vinyl.

"Boxes and boxes started to head our way — they were gratefully received," Bennett tells NPR's Melissa Block. "Each one was a crackingly good album. But it was more than that — it was like a footprint through history."

Bennett says that he and Kun started to become obsessed with collecting the albums.

"Whereas normal men go to Vegas or go golfing or perhaps hunting, at the weekend," he says, "the two of us would head to the place where Jewish vinyl goes to die — which is of course Boca Raton — and spend hours cruising around thrift stores there and returning back laden down by vinyl."

But how did the two of them get into collecting Jewish kitsch albums in the first place?

Bennett, who grew up in Liverpool, England, says he stumbled into it when he was 8 or 9 years old. He inherited his mother's record player and her records. And among the Mamas and the Papas' greatest hits and the Beatles albums, he says, he stumbled across two — one by Connie Francis and the other, Irving Fields' Bagels and Bongos — that "struck [him] as being fairly remarkable."

"The second has come to loom large in my life, because it connected me to Josh originally, which is Irving Fields' Bagels and Bongos, a Jewish guy who grew up in New York, trying to make music that would please the Latin community."

"As you can probably tell, Roger is an incredible mambo dancer, so that record was a direct beeline to his heart and legs," Kun says. "For me it was the record that was key that opened up this whole world that I never knew existed, which was the Jewish Latin craze of the 1940s and '50s."

"Bagels and Bongos was really just the tip of the iceberg," he adds. "Its cover is probably the most striking thing that first caught my eye 'cause of its total elegance. But the music on the record is just beautiful, beautiful Latin versions of various Yiddish songs and Hebrew songs."

As Bennett and Kun traveled their journey through Jewish LPs, they also found Ruth Wallis, who Kun says was "part of the crew of bawdy, trash-talking, hard-drinking, hard-smoking women comics in the 1960s, who have really for the most part dropped out of history."

While Wallis has been remembered, the women around her, like Patsy Abbott, he says, "have been forgotten."

This is what Kun and Bennett have found particularly disconcerting — Bennett says they want to "change the legacy of many of the performers that we found, to send out a beacon to other performers who are out there, who are still alive, so that we can record their stories."

As they continue to collect records, Bennett and Kun are searching for answers to particularly difficult questions.

"Which is, really, who are we, what are we inheriting, what does it mean to us, and what are we going to do about it?" Bennett says. "So that this book really is the beginning of a journey, the journey is not over, and we're framing questions. We've got thousand of albums left to collect before we can even think of answering them."