Accessibility links
Singing: The Key To A Long Life Every week, British musician Brian Eno and his friends gather in a London flat for a night of a capella singing. Eno believes group singing is more than just a good time — he says it renews mind, body, spirit and community.

Listen
Singing: The Key To A Long Life 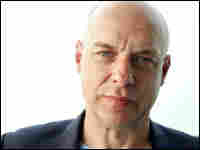 British composer, artist and activist Brian Eno was a founding member of the rock group Roxy Music, and has produced recordings by Talking Heads and U2. Eno's latest album, "Everything That Happens Will Happen Today," is a collaboration with David Byrne. Courtesy Brian Eno hide caption 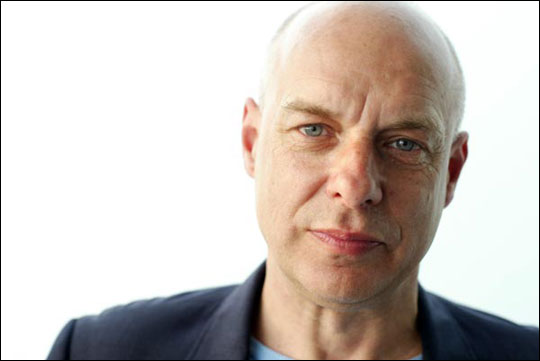 British composer, artist and activist Brian Eno was a founding member of the rock group Roxy Music, and has produced recordings by Talking Heads and U2. Eno's latest album, "Everything That Happens Will Happen Today," is a collaboration with David Byrne.

Can't Help Falling In Love
Love Me Tender
Keep On the Sunny Side
Sixteen Tons
Will the Circle Be Unbroken
Dream
If I Had a Hammer
Love Hurts
I'll Fly Away
Down By the Riverside
Chapel of Love
Wild Mountain Thyme
Que Sera, Sera
Cotton Fields

A few years ago a friend and I realized that we both loved singing but didn't do much of it. So we started a weekly a capella group with just four members. After a year we started inviting other people to join. We didn't insist on musical experience — in fact some of our members had never sung before. Now the group has ballooned to around 15 or 20 people.

I believe that singing is the key to long life, a good figure, a stable temperament, increased intelligence, new friends, super self-confidence, heightened sexual attractiveness and a better sense of humor. A recent long-term study conducted in Scandinavia sought to discover which activities related to a healthy and happy later life. Three stood out: camping, dancing and singing.

Well, there are physiological benefits, obviously: You use your lungs in a way that you probably don't for the rest of your day, breathing deeply and openly. And there are psychological benefits, too: Singing aloud leaves you with a sense of levity and contentedness. And then there are what I would call "civilizational benefits." When you sing with a group of people, you learn how to subsume yourself into a group consciousness because a capella singing is all about the immersion of the self into the community. That's one of the great feelings — to stop being me for a little while and to become us. That way lies empathy, the great social virtue.

Well here's what we do in an evening: We get some drinks, some snacks, some sheets of lyrics and a strict starting time. We warm up a bit first.

The critical thing turns out to be the choice of songs. The songs that seem to work best are those based around the basic chords of blues and rock and country music. You want songs that are word-rich, but also vowel-rich because it's on the long vowels sounds of a song such as "Bring It On Home To Me" ("You know I'll alwaaaaays be your slaaaaave"), that's where your harmonies really express themselves. And when you get a lot of people singing harmony on a long note like that, it's beautiful.

But singing isn't only about harmonizing pitch like that. It has two other dimensions. The first one is rhythm. It's thrilling when you get the rhythm of something right and you all do a complicated rhythm together: "Oh, when them cotton balls get a-rotten, you can't pick very much cotton." So when 16 or 20 people get that dead right together at a fast tempo that's very impressive. But the other thing that you have to harmonize besides pitch and rhythm is tone. To be able to hit exactly the same vowel sound at a number of different pitches seems unsurprising in concept, but is beautiful when it happens.

So I believe in singing to such an extent that if I were asked to redesign the British educational system, I would start by insisting that group singing become a central part of the daily routine. I believe it builds character and, more than anything else, encourages a taste for co-operation with others. This seems to be about the most important thing a school could do for you.

Independently produced for Weekend Edition Sunday by Jay Allison and Dan Gediman with John Gregory and Viki Merrick. Special thanks to Davia Nelson of The Kitchen Sisters for recording this essay.