Accessibility links
A Thanksgiving Meal From The Test Kitchen When it comes to cooking large meals, experience is key. And few cooks have more experience than Chris Kimball, host of the PBS show America's Test Kitchen. In an annual tradition, Kimball shares his kitchen know-how with Renee Montagne and Steve Inskeep. And all the questions came from our audience.

Listen
A Thanksgiving Meal From The Test Kitchen 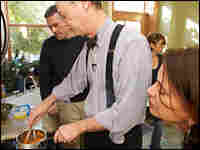 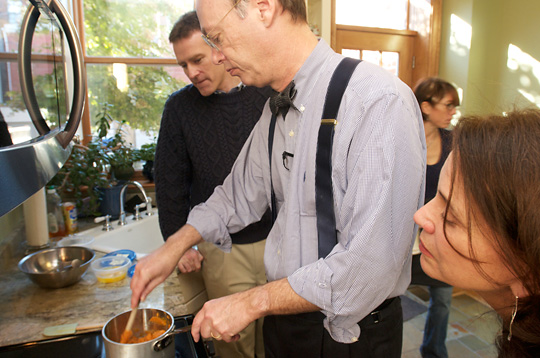 When it comes to cooking large meals, experience is key. And few cooks have more experience than Chris Kimball, host of the PBS show America's Test Kitchen.

In a Thanksgiving tradition, Kimball shares his kitchen know-how with Renee Montagne and Steve Inskeep. And while this year's installment takes place at the Inskeep household, all the topics were suggested by e-mails from our audience.

We asked for your questions — everything home cooks puzzle over year after year at Thanksgiving. And from a great appetizer to using a thermometer, your answers have now arrived. 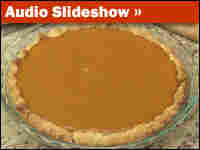 Cooking a pie entails risks — and many of them center on the crust. If the foundation of a pie — especially a custard pie like a pumpkin pie — is too dry or too wet, it could crumble apart or slide off forks. Or the whole thing could be so dense that the pie begins to resemble an upside-down cobbler.

To get those risks under control — and give home chefs a chance to impress their guests this holiday season — we asked chef Chris Kimball of America's Test Kitchen to share his recipe for the perfect pumpkin pie. Honed by hours in the kitchen, this recipe gives the mild pumpkin two strong allies: sweet potatoes and vodka.

A good crust needs to have layers of flaky texture to complement the smooth pie filling, Kimball says. And one way to ensure that is to combine the butter and mixture with the flour in two stages. That makes a striated dough — one that holds different amounts of fat and moisture in its layers.

Another key point, Kimball says, is to avoid adding water or liquid directly into the food processor — something that other recipes call for.

"I think that's a mistake," Kimball said. "It's better to do that into a bowl, so you don't overwork it."

And there's one other big secret to this crust recipe: vodka, in equal proportion to the water.

"Vodka does two things," Kimball said. First, "it does not react with proteins in flour to form gluten — because gluten means tough."

And since alcohol makes up nearly half of the vodka, it will evaporate as it cooks. "You can add more total liquid," Kimball said, but since the vodka will evaporate in the oven, "you end up with a dough that's light and flaky."

When it's time to roll out the dough, Kimball suggests using a one-piece, tapered rolling pin, without ball-bearings. That gives a better feel for the dough, he said. And in rolling out the dough, the tapered shape makes it easier to work on it in quarter-turns — so as not to overwork the center.

"You just keep turning the dough as you work it," Kimball said.

When it's time to put the crust into the pie plate, Kimball recommends putting the plate over the rolled-out circular shape, letting the dough extend past the plate by "about 4 inches more in diameter than the top of the pie plate."

While the crust precooks in a 400-degree oven, Kimball turns to the filling. And here, he has wavered from the strict pumpkin-pie routine, by adding sweet potatoes to the mix.

"They improve the flavor," Kimball said, "because sweet potatoes actually have an earthier flavor — pumpkins are a little lighter."

He cooks his pie filling for more than 10 minutes, to remove excess liquids and concentrate the flavors in the mix. In between turns stirring the mix, Kimball turns to the liquid components: the cream and eggs. And when it's time to combine the two, the chef suggests straining the sweet potato mixture by mashing it down into the strainer with a metal ladle, to keep any chunky bits from getting into the pie.

"If you're going to go to all the trouble we're going to," Kimball said, "you want to do that."

And finally, it's time to fill the crust. Kimball starts it out on the countertop, bringing the mixture nearly an inch from the top. Then he places the pie onto an extended oven rack — and that's where he finishes pouring the filling. Otherwise, he says, the filling might spill over the sides as he moves it.

And filling the pie to the top gives the cook a break, he said: "This is where you hide your mistakes."

Cooking times will vary according to different ovens, Kimball said. But anyone expecting to remove a perfectly firm, completely cooked pie should change his idea.

"When you bake a custard pie — a pumpkin pie is custard, because it has dairy and eggs — you don't want it to be fully set in the center," Kimball said.

Anyone worried about taking out a half-cooked pie can even use an instant thermometer to measure the middle of the pie. "Any custard is done when it's about 175," Kimball said.

After taking it out of the oven, the pie should sit on an open surface for three hours to cool — and continue to cook, Kimball said.

"After three hours, it can go in the fridge," Kimball said. "Or you can eat the whole thing, which is my plan."

If candied yams are unavailable, regular canned yams can be substituted. The best way to judge doneness is with an instant-read thermometer. The center 2 inches of the pie should look firm but jiggle slightly. The pie finishes cooking with residual heat; to ensure that the filling sets, cool it at room temperature and not in the refrigerator.

To ensure accurate cooking times and a crisp crust, the filling should be added to the prebaked crust when both the crust and filling are warm. Serve at room temperature with whipped cream. Vodka is essential to the texture of the crust and imparts no flavor; do not substitute.

1. FOR THE CRUST: Process 3/4 cup flour, salt and sugar in food processor until combined, about two 1-second pulses. Add butter and shortening, and process until homogenous dough just starts to collect in uneven clumps, about 10 seconds; dough will resemble cottage cheese curds with some very small pieces of butter remaining, but there should be no uncoated flour. Scrape bowl with rubber spatula and redistribute dough evenly around processor blade. Add remaining 1/2 cup flour and pulse until mixture is evenly distributed around bowl and mass of dough has been broken up, 4 to 6 quick pulses. Empty mixture into medium bowl.

2. Sprinkle vodka and water over mixture. With rubber spatula, use folding motion to mix, pressing down on dough until dough is slightly tacky and sticks together. Flatten dough into 4-inch disk. Wrap in plastic and refrigerate at least 45 minutes or up to 2 days.

3. Adjust oven rack to lowest position, place rimmed baking sheet on rack, and heat oven to 400 degrees. Remove dough from refrigerator and roll out on generously floured (up to 1/4 cup) work surface to 12-inch circle about 1/8 inch thick. Roll dough loosely around rolling pin and unroll into pie plate, leaving at least 1-inch overhang on each side. Working around circumference, ease dough into plate by gently lifting edge of dough with one hand while pressing into plate bottom with other hand. Refrigerate 15 minutes.

4. Trim overhang to 1/2 inch beyond lip of pie plate. Fold overhang under itself; folded edge should be flush with edge of pie plate. Using thumb and forefinger, flute edge of dough. Refrigerate dough-lined plate until firm, about 15 minutes.

7. Remove pan from heat and whisk in cream mixture until fully incorporated. Strain mixture through fine-mesh strainer set over medium bowl, using back of ladle or spatula to press solids through strainer. Rewhisk mixture and transfer to warm prebaked pie shell. Return pie plate with baking sheet to oven and bake pie for 10 minutes. Reduce heat to 300 degrees and continue baking until edges of pie are set (instant-read thermometer inserted in center registers 175 degrees), 20 to 35 minutes longer. Transfer pie to wire rack and cool to room temperature, 2 to 3 hours. Cut into wedges and serve.

Solid Starter: With a unique blend of cheeses and a little spice, guests will realize this isn't their grandmother's cheese ball. William Plowman for NPR hide caption 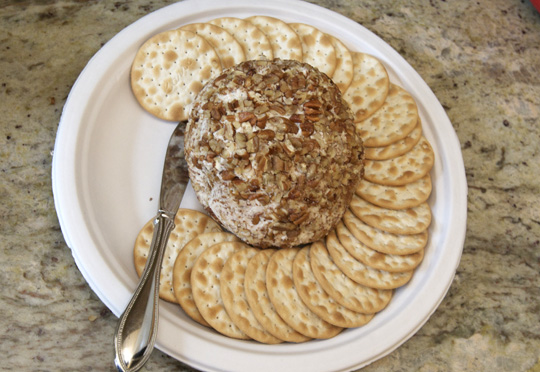 Solid Starter: With a unique blend of cheeses and a little spice, guests will realize this isn't their grandmother's cheese ball.

Your favorite crackers or toasted slices of crusty bread are good with this cheese ball.

1. Process all of the ingredients (except the pecans) in a food processor until smooth, scraping down the sides as necessary, about 1 minute. Transfer the cheese mixture to the center of a large sheet of plastic wrap.

2. Seal the cheese in the wrap and shape into a rough ball (the mixture will be somewhat loose). Refrigerate until firm, about 3 hours. (The cheese ball can be refrigerated for up to 2 days.) Once the cheese ball is firm, reshape it as necessary into a smooth sphere. Unwrap the cheese ball and roll it in the pecans. Let it sit at room temperature for 15 minutes before serving.

A Seasonal Salad: Pears and pecans mingle with a dressing that is both tart and sweet in this autumn salad. William Plowman for NPR hide caption 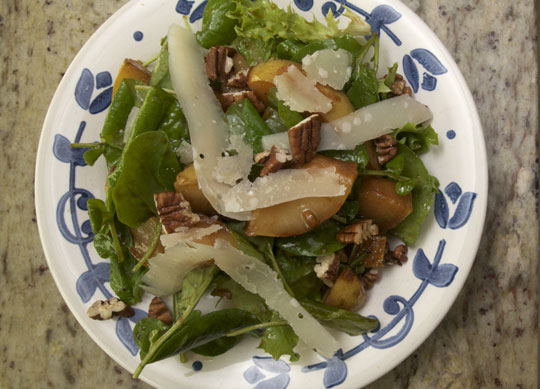 A Seasonal Salad: Pears and pecans mingle with a dressing that is both tart and sweet in this autumn salad.

The test kitchen prefers Bartlett pears for this recipe, but Bosc pears can also be used. With either variety, the pears should be ripe but firm; check the flesh at the neck of the pear — it should give slightly when pressed gently with a finger. If using Bartletts, look for pears that are starting to turn from green to yellow. Romaine lettuce may be substituted for green leaf.