Accessibility links
Journalists Marked For Death In Mexican Town Mexico is one of the world's most dangerous countries for journalists. In the border city of Juarez, journalists are continually targeted for reporting crime stories. Many news organizations are scaling back their coverage because of the danger. 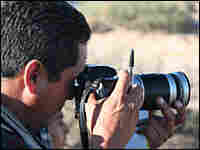 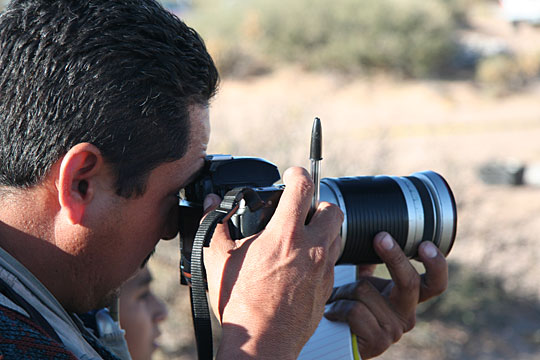 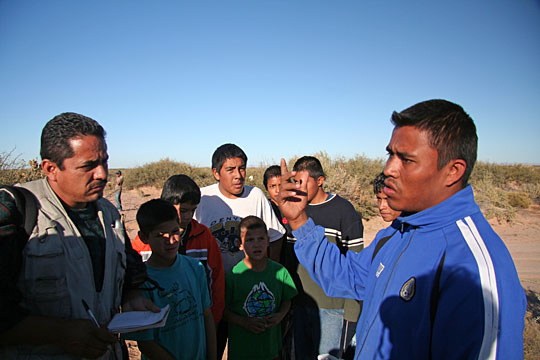 Ruiz (left) talks to bystanders near where a man discovered human remains, south of Juarez. 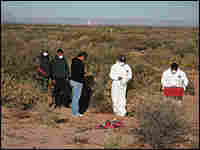 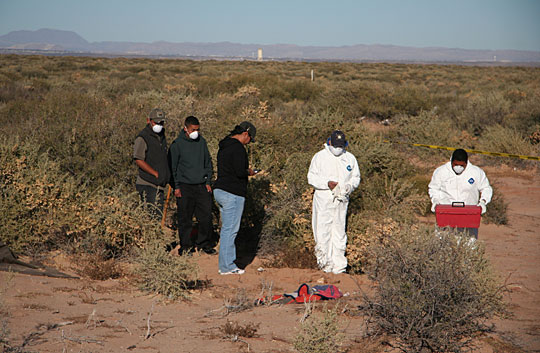 Mexico is one of the world's most dangerous countries for journalists. Five reporters have been murdered so far this year — casualties in a war between rival drug cartels for influence and territory.

Currently, Mexico's most violent city is Juarez, where nearly 1,300 people — including 60 police officers — have been killed so far this year. Public officials stated this week that murder may have surpassed diabetes as the chief cause of mortality in this border city of a million and a half people.

In the latest twist, the messengers are now being targeted.

Last week, assailants gunned down a well-known local journalist and threatened others, and earlier this month, the Juarez authorities made a discovery that is gruesome even for a city that has become inured to horror: A headless body was found hanging from a highway overpass. The decapitated head was then discovered inside a plastic bag resting in a park known as the Plaza of the Journalists.

Local reporters braced themselves for what many feared would come next. On the morning of Nov. 13, a gunman opened fire on a 40-year-old journalist named Armando Rodriguez as he sat in his car, shooting him in his driveway as he waited to take his daughter, Ximena, to school. "El Choco," or Chocolate, so nicknamed because of his dark skin, was the crime reporter at El Diario de Juarez for more than a decade.

"I heard the shots. I even counted," Chacon said. "I said, it's like eight shots from a .45 or 9-millimeter. And I was with my wife and I said to her, 'Somebody killed another guy,' but I never realized that it was the Choco."

Last week, under pressure from his wife and his parents, Chacon left the police beat to cover business.

Two other local crime reporters have now received death threats and fled with their families across the river to El Paso, Texas. One of them is Jorge Luis Aguirre, the 51-year-old editor of a popular Juarez news Web site called La Polaka.

"Thursday evening, I was going to the wake for Armando Rodriguez when I received a call. A stranger's voice told me I was next. I was going to be the next one killed," Aguirre said. "And so I panicked. I drove through the streets thinking I would be killed then and there. Eventually, I parked my car and called my sons, who were at school, and my wife. They picked me up off the street and we went to the American consulate, but it was closed. We were finally able to get to the border. We crossed the bridge, so now we're refugees trying to save our lives."

Aguirre, looking disheveled and nervous, sat for an interview inside an ice cream parlor in El Paso wondering if every person he saw was an informant for the cartel. He received an e-mailed threat just three days ago saying they would find him wherever he was.

Aguirre says he plans to ask for political asylum for his family in the United States.

"I'd rather live than be a journalist," he said. "If I have to quit, I'll quit. In my country, it's no longer possible to live or work there. We had a lot of success with what we did. But there are people who don't tolerate criticism."

According to the New York-based Committee to Protect Journalists, 24 reporters have been killed in Mexico since 2000 and seven have disappeared since 2005. None of the cases — not one — has been solved despite the fact that two years ago, a special federal prosecutor for crimes against journalists was appointed.

Mexican journalists say that with mafia enforcers as well as police agents able to intimidate, kidnap or exterminate reporters with impunity, reporters have to look out for themselves. Among recent security measures in Juarez: no bylines on and no in-depth crime stories.

"Investigative journalism in Juarez is suicide," said one veteran editor, grimly. "We don't publish names, addresses, license plates, speculation on the culprits. No details beyond the basic facts."

"I believe that it might get to the point where no news company is going to put out police stories," Roman said. "It could get to that point."

Like other Juarez news outlets, Channel 44 can freely report authorities' reactions to the crime wave: about the police cadets who will be stationed at kindergartens to prevent kidnappings, about the army's offer to guard El Diario after El Choco's murder, about the police program to escort businessmen picking up their payroll.

Roman tries to protect his reporters from reporting anything at a crime scene that might get them in trouble.

Because once that happens, Roman said, "if the mafia wants to kill you, they're gonna kill you. And I think everybody knows that — whether you wear bulletproof vest, whether you publish your stories without names — these people know more than anybody. If you go into the U.S., somehow you'll have to come back someday, or they'll find you."

'Not The Juarez Of The Past'

After El Choco was murdered, Raymundo Ruiz, the longtime photographer for El Norte, started wearing a bulletproof vest. It bulks him up like a wrestler under his sweater as he digs into a plate of enchiladas at a Juarez cafe.

Ruiz says he, too, has received threats in the past.

"Now when I arrive at a crime scene, I look around to see who's in my surroundings," Ruiz says. "It's not the Juarez of the past, where the bad guys would only kill amongst themselves. Now they'll kill state police and even journalists. Now the violence has reached all of us."

Ruiz says he has received threats in the past, but he refuses to leave the profession.

"I'm addicted to journalism, to the danger, to the adrenaline," he said. "I tried to quit once, but I couldn't. And besides, I like my work. It helps people."

Ruiz lives the job. He juggles two cell phones, talking constantly with ambulance drivers, cops and other photographers, and his ear is always cocked to the police scanner that rides in the top pocket of his vest.

After lunch, there's a report of a body found in a shallow grave south of the city. He guns the accelerator of his decrepit Toyota — a car straight out of The Road Warrior — and starts feeding the tip to the rest of the press corps.

The dusty sedan hurtles through the streets, past prayer houses, Alcoholics Anonymous meeting halls, giant supermarkets, colossal foreign-owned factories and other landmarks of this post-modern city rising from the desert.

Ruiz is tailing a white forensics van headed to the grave site. He drives down a dirt road through thorn bushes and piles of household trash in the wasteland south of Juarez.

He stops, gets out, walks up to the police tape and raises his Nikon D70 to snap a photo of forensic technicians in white bio-suits gingerly shoveling sand around a rib cage protruding from the earth. Ruiz then walks over to the man who discovered the body. He's a 26-year-old soccer referee, flush with the excitement of his momentary celebrity. The man says he was looking for recyclable trash with his son when they spotted human bones.

Ruiz is interviewing him because under his newspaper's new security policy, police reporters don't go to crime scenes anymore — only photographers.

The soccer ref is saying this desert has become a burial ground. Corpses turn up all the time. "Here in Juarez, the way things are nowadays," the man says, "you can find a dead body almost anywhere."

The crime scene can be described as festive. The forensic workers banter; the photographers trade jibes; clusters of youngsters from the nearby housing complex cut up and throw gang signs for the cameras.

Another member of the Juarez paparazzi arrives. Lucio Doria, the photographer for El Diario, was El Choco's partner. Doria looks around at the gaggle of children and shakes his head.

"There are times when the vendors come to sell burritos, chips, sodas," Doria says. "They do a good business. And people see it as normal — it's like a picnic for them. That's the daily routine here on the border. We have lots of deaths. It's like our daily bread. The little daily deaths."

Alfredo Quijano, editor of Norte de Juarez, whose reporters have been threatened, summed it up this way: "There will be an end to the violence, but it won't be because of intervention by the authorities. It will end because one side will win and one side will lose in the killings. It's tragic, but logical."