Accessibility links
New Clues In Lusitania's Sinking When the luxury liner went down, it left a mystery behind: What was the cause of the second blast? After nearly a century of investigation, argument and intrigue, clues are starting to surface. 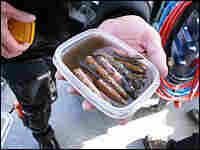 Ammunition found in the wreck of the Lusitania. Connie Kelleher hide caption 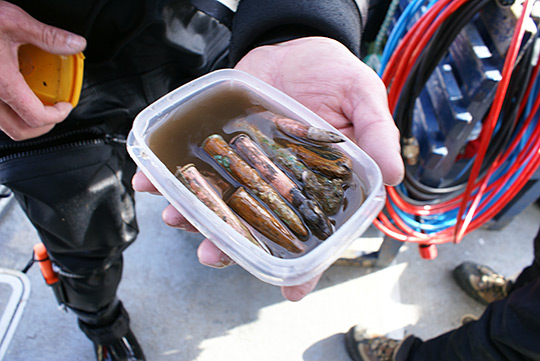 Ammunition found in the wreck of the Lusitania.

Independent producer Anne Goodwin Sides recently followed a dive team to the wreck of the Lusitania for the first forensic expedition. What the the divers brought up is already changing history.

When the Lusitania went down, it left a mystery behind: What was the cause of the second blast? After nearly a century of investigation, argument and intrigue, clues are starting to surface.

On May 7, 1915, the RMS Lusitania, jewel of the Cunard Line, was on a New York-to-Liverpool run when it was attacked by a German U-boat 12 miles off the coast of Ireland. At 2:10 p.m., a torpedo plowed into the ship and exploded. Fifteen seconds later, a massive second explosion rocked the ship again. Within a mere 18 minutes, the Lusitania plunged 300 feet to the bottom of the Celtic Sea. Of the 1,959 passengers and crew, 1,198 were lost, including 128 Americans. The tragedy sparked anti-German fervor that eventually drew the United States into World War I.

Back in the present day, the engine of Colin Barnes' 36-foot catamaran purrs like a sleeping cat as it motors through the swells toward the wreck of the Lusitania. The Irish coastline is a gauzy smudge about 12 miles north; the lighthouse at the Old Head of Kinsale is a faint spike in the distance.

Barnes, a transplanted Englishman, stands at the helm of his vessel, Holly Jo, rolling a cigarette. After weeks of drenching rain, sunlight is glinting off the sea and the sky looks as if it's been scrubbed clean.

Barnes has had a long career as a fisherman and dive boat captain in County Cork — he says he's sailed over the wreck of the Lusitania at least 50 times. He often reflects on what it must have been like during the disaster — more than 1,000 people in the freezing water, wreckage strewn about.

"Everyone who survived said how awful it was, listening to all these people crying for help," he muses. "Just hundreds of people were about to perish in the cold water and just yelling for help."

Barnes shudders, imagining the wildly tilting lifeboats spilling passengers 60 feet headlong into the sea ... and a tiny periscope disappearing beneath the waves. His voice quavers slightly as he recounts the unfathomable actions of the British Royal Navy. The Navy had dispatched a cruiser from nearby Queenstown to undertake a rescue — but the ship was mysteriously recalled just as it steamed into view of the survivors. The stricken masses were left frantically waving in disbelief.

As if on cue, a ghostly form appears on Barnes' scanner. Directly below us, 303 feet down, the Lusitania slumbers in cold, dark water clouded with plankton.

"She's lying on her starboard side and all the masts and rigging have fell down on the starboard side and the port side is still amazingly clean," Barnes says. "You can see all the portholes. She's still a big, proud structure on the seabed. But she is collapsing."

Eventually, the port side will meet the sea floor and everything will be entombed. Barnes consults his GPS and feathers the engine to steer toward the exact spot where highly trained divers will drop a shot line and descend into the murk.

On the deck of the Holly Jo, divers Ewoin McGarry and Stewart Andrews are suiting up. There's a ruckus of hissing hoses, clanking tanks and suctioning buoyancy bladders. Beneath their fins, the frigid Celtic Sea heaves in a steady, hypnotic rhythm.

As McGarry and Andrews descend down the shot line, a small submersible robot, or ROV (for "remotely operated vehicle") follows them down to the wreck.

Minutes later, Andrews is seen on a TV monitor in the wheelhouse scooping something up in his gloved hand — a small cache of metal. His masked face is beaming in the astringent light.

In his hands lie pieces of history: seven gleaming rounds of .303 ammunition, probably made by Remington in America and intended for the British Army. Ammunition that for decades British and American officials said didn't exist. Yet all around Andrews are mountains of jumbled rifle cartridges that glint like pirate's treasure in the robot's light.

Gregg Bemis, the American venture capitalist who planned and paid for this expedition, says if they're lucky, the dive team could find as many as 4 million bullets.

The crew sends up a cheer — this is the first real breakthrough in a patient effort to solve one of the last lingering riddles behind the Lusitania's sinking.

With its historical intrigue and forensic cul-de-sacs, the Lusitania is a powerful magnet for a colorful cast of obsessives determined to solve the mystery. Some have gone broke or turned to drink. Others landed in mental institutions or even committed suicide. For his part, Bemis says he's been crazy enough to spend a small fortune doggedly defending his title as the Lusitania's "salvor-in-possession" — which entitles him only to the ship itself and anything that was once Cunard's property.