Accessibility links
Credit Scores Even More Key In A Tight Economy Lenders are tightening their standards for new loans and credit cards, and they're paying close attention to an applicant's credit score. That score, called a FICO score, often determines whether the applicant will get credit and at what interest rate.

Listen
Credit Scores Even More Key In A Tight Economy

FICO credit scores range from 300 to 850. A lower score can result in higher interest rates. In difficult economic times, it's important to understand what's in your score and how to improve it. 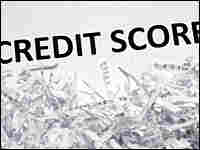 Nearly every time you apply for a mortgage, a car loan, even a department store credit card, the prospective lender obtains your FICO score. iStockphoto.com hide caption

Lenders are tightening their standards for new loans and credit cards, and they're paying close attention to an applicant's credit score. That score, called a FICO score, often determines whether you'll get credit and at what interest rate.

Half a century ago, an engineer named Bill Fair and a mathematician named Earl Isaac pioneered the idea of an automated credit scoring system. They later broadened their mathematical formulas to cover all kinds of consumer credit — and FICO, an acronym for the Fair Isaac Corporation, was born.

How do FICO scores work?

Just about every time you apply for a mortgage, a car loan, even a department store credit card, the prospective lender obtains your FICO score. The data that go into that score — your credit history — are compiled and updated constantly by credit reporting agencies.

A lender, such as a retailer, poses an electronic query to a credit reporting firm. Then that firm runs the information "through an algorithm that we provide," says Fair Isaac CEO Mark Greene. "So we provide the math, the bureau provides the data, and very quickly a number is computed and sent back to the retailer."

FICO scores range between 300 and 850. In today's tight credit market, it takes a score of 760 or higher to be considered a very good credit risk. On the low end of the scale, many lenders are now shying away from consumers whose scores are below 680. Even if low-scoring consumers get credit, it will cost more — often more than twice the interest rate paid by someone with a higher score.

There are three main elements, Greene says. The first is credit history — do you pay your bills on time? The second is the amount of money you owe — do you have large outstanding balances? And the third factor is the length of your credit history — how long have you had a trusted relationship with creditors?

Surprisingly, the FICO formula does not take into account a person's income or employment history. It does, however, look at your total outstanding debt at a given moment in time. So even if you were to pay all your credit obligations in full every month, that won't necessarily give your score a big boost.

What's more, the formula penalizes you for maxing out your credit cards — even if you pay it off.

How can consumers improve their scores?

Steve Katz, director of consumer education at TransUnion, one of the three major credit reporting agencies, says it's important to be aware of how much credit you're using.

Make your payments. "If you miss a payment by 30 days or greater, that can really cause a shift in a credit score that a consumer wouldn't want to see, so we always tell people to make at least the minimum payment due in a given month," Katz says.

Other factors that will adversely affect your score include foreclosures, collection proceedings, even opening a slew of new credit cards at one time — that could signal you are about to take on too much debt.

In a tough economic climate, you might expect everyone's score to fall. Historically, that's not what happens, says Greene of Fair Isaac.

"The scores actually spread out," he says. "There are more people at the low end of the spectrum, as you would guess. But there's also more people whose scores go up — and that might be because people who already had good credit scores, who are already sensible in their finances, become even more so."

With credit as tight as it is now, experts say it's more important than ever for consumers to know their FICO score and what's in their credit reports. A score that is incorrect — and thus too low — could prove costly.