Accessibility links
From Congress To The Cabinet It's not yet clear how many openings President-elect Obama will create in Congress as he assembles his administration. But in recent decades, many of those selected from the House and Senate by newly elected presidents saw their seats taken over by the opposite party.

From Congress To The Cabinet

From Congress To The Cabinet

Picking Melvin Laird for secretary of defense in 1969 cost the GOP his Wisconsin House seat, which they have yet to win back. hide caption 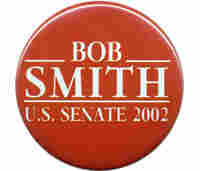 Add New Hampshire's Smith to the list of senators who were defeated shortly after their presidential bid. hide caption 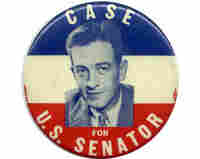 The apparent selection of Sen. Hillary Clinton (D-NY) as the next secretary of state, along with that of Rep. Rahm Emanuel (D-IL) as the next White House chief of staff, may not be the only occasions on which President-elect Barack Obama decides to fill his administration with sitting members of Congress. As it is, the election of Obama and Joe Biden opens up two Senate seats, in Illinois and Delaware. And that hasn't happened since 1960, when the Democratic ticket made up of two senators, John Kennedy (MA) and Lyndon Johnson (TX), was elected.

We touched upon the possibilities of an open Senate seat in New York in last week's column. We'll wait for more Cabinet names to come out before looking at how the political dominoes fall. But here's a look back at every newly elected president since JFK who filled his Cabinet or other administration jobs with sitting members of the House or Senate. This list excludes re-elected chief executives, such as Richard Nixon in 1972, Ronald Reagan in '84, Bill Clinton in '96 or George W. Bush in 2004, because, for the most part, members of their Cabinets simply stayed in office. Bush, in fact, was the first president since Dwight Eisenhower in 1952 not to fill his first administration with incumbent members of Congress. I'm also excluding Johnson, who became president under tragic circumstances and kept a large number of Kennedy Cabinet officials in his administration.

For the record, naming a member of the House automatically results in a special election, as vacancies there cannot be filled by appointment, unlike in the Senate. As the list below shows, many of those selected from Congress saw their seats won by the opposite party:

Secretary of Defense — Rep. Les Aspin (D-WI). Peter Barca, a Democrat, narrowly won the 1993 special election, but he lost the seat to Republican Mark Neumann in 1994.

Secretary of the Treasury — Sen. Lloyd Bentsen (D-TX). Democrat Robert Krueger, a former representative, was appointed to the seat, but he lost to Republican Kay Bailey Hutchison in a 1993 special election.

Secretary of Agriculture — Rep. Mike Espy (D-MS). Seat retained for the Dems by Bennie Thompson in a 1993 special election.

Office of Management and Budget Director — Rep. Leon Panetta (D-CA). Seat retained for the Dems by Sam Farr in a 1993 special election.

Secretary of Defense — Rep. Dick Cheney (R-WY). Seat retained for the GOP by Craig Thomas in a 1989 special election. (Cheney was named after the Senate rejected the nomination of John Tower.)

Vice President — Sen. Walter Mondale (D-MN). The move by Gov. Wendell Anderson (D) to have himself appointed to Mondale's Senate seat backfired. Anderson resigned as governor in December 1976; his successor, fellow Democrat Rudy Perpich, appointed Anderson to the Senate. Anderson then went on to lose to Republican Rudy Boschwitz in 1978.

U.N. Ambassador — Rep. Andrew Young (D-GA). Seat retained for the Dems by Wyche Fowler, who easily defeated fellow Democrat John Lewis in a 1977 special runoff. It was the first time in the 20th century that a white candidate won a House seat previously occupied by a black.

By the way, Nixon also made two other early appointments that resulted in House vacancies. He named California Lt. Gov. Robert Finch (R) as his secretary of health, education and welfare, and Rep. Ed Reinecke (R) was then appointed to succeed Finch as lieutenant governor. The GOP retained Reinecke's seat, as Barry Goldwater Jr. won a 1969 special election. Republicans weren't as fortunate when Nixon named Rep. James Battin (R-MT) as a U.S. District Court judge. The seat went to Democrat John Melcher in a 1969 special election.

President — Benjamin Smith II (D), JFK's college roommate, was appointed to his Senate seat in a caretaker role. In 1962, when he was old enough to serve in the Senate, Ted Kennedy (D) won his brother's seat in a special election.

Now, time for some questions:

Q: What if President-elect Obama works out a deal with New York Gov. David Paterson to name Bill Clinton to Hillary's Senate seat if Obama makes her secretary of state? That would take care of the "Bill problem" by keeping him busy with official duties. Is this scenario remotely possible? — Steven Nelson, Budapest, Hungary

A: The fact that NPR hasn't fired me yet proves that anything is possible. But don't hold your breath for a Bill Clinton appointment. The betting favorite for a Hillary Senate replacement seems to be state Attorney General Andrew Cuomo. I still say don't count out Rep. Nita Lowey, who was all set to run in 2000 following the retirement of Sen. Daniel Patrick Moynihan until Hillary and Bill became New Yorkers.

Q: I see that Nebraska split its electoral votes, with Barack Obama winning one in the Omaha-based 2nd Congressional District. Is that the first time it's ever happened? — Cathy Fine, Washington, D.C. (Similarly, Martin Ericson of Concord, N.C., and Blair Finkelstein of Tucson, Ariz.)

A: It is indeed. Maine and Nebraska are the only states that don't have a winner-take-all system of allocating electoral votes. There, the statewide winner gets two votes, and the winner in each congressional district gets one. Obama won Nebraska's 2nd CD by 3,325 votes and thus gained an electoral vote. Maine has had that system since 1972 and Nebraska since '91, but this is the first time that either state has split its electoral votes.

Q: Can you please elaborate on your statement in the Oct. 29 column about Sarah Palin, in which you said this is the "closest a woman has ever come to becoming vice president"? What about Geraldine Ferraro, who was Walter Mondale's running mate in 1984? — Janet Pickel, Pittsburgh

A: The Mondale-Ferraro ticket lost 49 states that year. I was only suggesting that Palin's chances of becoming vice president were better than Ferraro's, given what happened in 1984.

NEXT WEEK — POLITICAL JUNKIE, THE BLOG: Well, now that the election is over and people, we are told, are no longer interested in politics, Political Junkie is going from a once-a-week column to a daily blog. Our timing, as always, is impeccable. But we're really excited about this venture, which begins Dec. 1. We hope others will be too.

We got an e-mail the other day from Milo Mowery of Lewisburg, Pa., who writes, "I'm a huge fan, have been for the past year. I listen to Wednesday's Talk of the Nation and the 'It's All Politics' podcast just because I can't get enough of you. I could listen to you all day." That followed one from Mike Roark of Ansbach, Germany, who says, "Thanks for making politics worthwhile to listen to. For too long I've been apathetic about politics, but after listening to your show [on TOTN] I'm slowly coming around." Jacob Russell-Snyder of Seoul, South Korea, loves getting "Russert-esque knowledge mixed with my grandpa's sense of humor. (And by the way, I'm a sucker for lines like the governor of Arizona having a great sense of Yuma.)" Trevor Wills of Chicago says, "I have just gotten into politics and I now listen to you religiously and have been reading your column. Will you please write a book!!!" Inness Foxe of Chapel Hill, N.C., adds, "We really enjoy the Junkie. Even the very bad jokes. Very, very bad jokes." And Laura Elsenboss of Mystic, Conn., says, "It's official — I'm now a Political Junkie too!" Well, let's see how Milo, Mike, Jacob, Trevor, Inness and Laura feel with an every-day Political Junkie blog.

But then again, listen to some of the stuff that has come in. Michael Gorman of Chicago points out that this year's GOP ticket "comprised two people whose names end in 'in' — McCain and Palin. Did you know that the last major-party ticket in which the running mates had names that ended in the same two letters comprised Barry Goldwater and Bill Miller, Republicans, in 1964?"

James McKinstra of Freeport, Ill., writes that 1964 was "the last time that all four major candidates for president and vice president had last names with six or more letters." He also notes that every 11th president has been a Democrat (Polk was the 11th, Grover Cleveland was the 22th, Harry Truman was the 33rd and now Obama will be the 44th).

Kent Coe of La Grande, Ore., reminds us that both candidates for VP came from states (Delaware and Alaska) that have the minimum number of electoral votes. And Jason Riggs of Kinston, N.C., noted that the four major-party candidates (Obama, Biden, McCain and Palin) "encompass four different time zones."

So, a toast to all those Political Junkies out there, sane or otherwise! And may they all still care about this stuff once we appear daily.

TRIVIAL PURSUIT: My Talk of the Nation trivia question on Nov. 19 had to do with the last sitting senator who ran for president who then went on to lose his next bid for re-election to the Senate. The answers were Birch Bayh of Indiana and Frank Church of Idaho, both of whom sought the Democratic presidential nomination in 1976 and went on to lose their Senate seats in 1980. Bruce MacNeil of Arlington, Va., suggests we might want to add New Hampshire's Bob Smith to the list. A presidential hopeful in 2000, Smith was defeated in the GOP primary in 2002 by John Sununu.

On the Nov. 12 show, when the question centered on Democratic National Committee chairs, such as Howard Dean and Fred Harris, who ran for president at some point in their careers, we completely forgot James Farley, FDR's choice to head up the party. Farley broke with Roosevelt in 1940 over the third-term issue and ran for the nomination himself. Thanks to Jack Pinnix of Raleigh, N.C., for the update.

And in the Oct. 29 column, answering a question about whether Mark Begich would be the first son of a House member to win a Senate seat, I first mentioned Tom (NM) and Mark (CO) Udall, who ran (and won) this year. And then I said the only other one I could think of was Sen. Jon Kyl (R-AZ), whose father was Iowa Congressman John Kyl. David Ray of Annandale, Va., came up with another one: former Sen. Howard Baker Jr. (R-TN), whose father was Rep. Howard Baker, also of Tennessee, who served from 1951 until his death in 1964.

Dec. 6 — Runoffs in two Louisiana congressional districts: the 2nd CD, where Rep. William Jefferson (D), who is under indictment on money-laundering and bribery charges, faces attorney Anh "Joseph" Cao (R); and the 4th CD, where John Fleming (R) and Paul Carmouche (D) square off for the seat being vacated by Republican Jim McCrery

IT'S ALL POLITICS: Despite the caustic criticism from al-Qaida, which compared our podcast unfavorably to Malcolm X, Ron Elving and I will continue with our sophisticated view of the political world. Current edition can be found here. New podcast every Thursday.

This day in campaign history: Democrats were contesting the apparent victory of former Rep. Clifford Case (R) over Rep. Charles Howell (D) for the New Jersey Senate seat being vacated by Republican Robert Hendrickson. Case led Howell by 3,369 votes (Nov. 24, 1954). Case, who would prevail and go on to win a fourth term in 1972, was defeated in the 1978 primary. A New Jersey Republican hasn't won a Senate race since.