Accessibility links
Food Crisis Expands In Tumultuous Zimbabwe As political leaders continue to bicker over key Cabinet posts in a power-sharing government in Zimbabwe, millions of people are going hungry. Many are left to barter goods and scour the ground to collect spilled grain and errant kernels of corn and other crops. 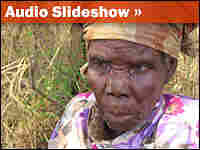 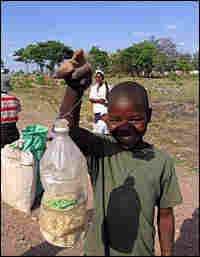 Children collect individual corn kernels and soybeans that have fallen on the ground from large sacks. Ofeibea Quist-Arcton/NPR hide caption 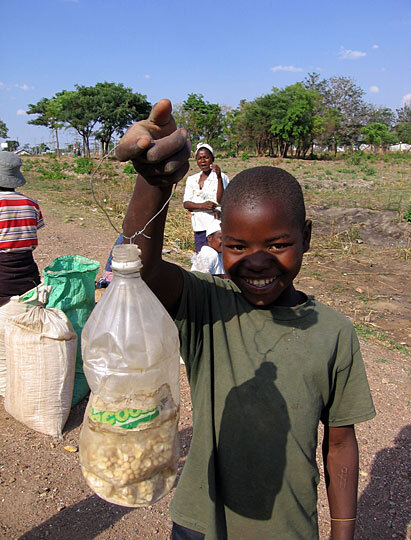 Children collect individual corn kernels and soybeans that have fallen on the ground from large sacks. 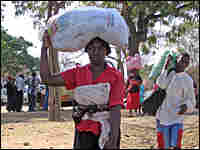 A woman carries a sack of Zimbabwe's main staple food, corn. Mealies, as it is also known, is bartered for other goods. Ofeibea Quist-Arcton/NPR hide caption 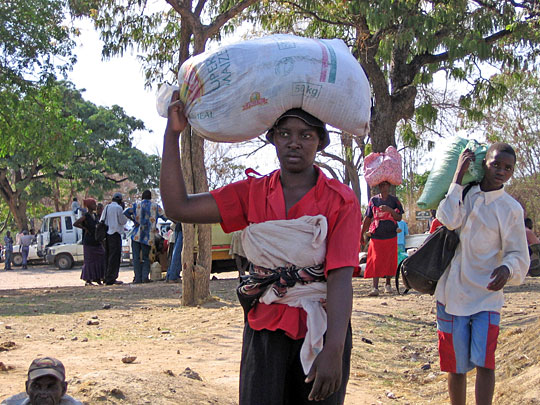 A woman carries a sack of Zimbabwe's main staple food, corn. Mealies, as it is also known, is bartered for other goods. 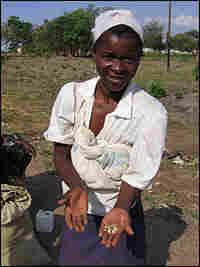 A woman shows what she has managed to rescue from the ground — spilled beans from barter traders like herself. Ofeibea Quist-Arcton/NPR hide caption 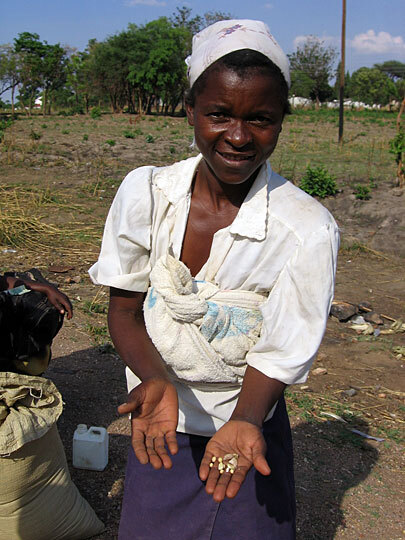 A woman shows what she has managed to rescue from the ground — spilled beans from barter traders like herself.

While Zimbabwe's political leaders continue to bicker over key Cabinet posts in a power-sharing government, many people are going hungry.

Their country was once the breadbasket of southern Africa, but now more and more Zimbabweans are forced to hunt for sustenance and barter essential commodities in exchange for food.

In a small town in northern Zimbabwe, Katy Phiri, a frail old woman — clearly exhausted under the scorching midday sun — picks her way through a vast field of recently plowed and harvested corn, the main staple food in Zimbabwe. She gathers all the leftover single corn kernels she can find. Easily in her 70s, the wizened grandmother says she hasn't eaten for three days.

"I'm hungry. I'm very hungry," she says. "There's nothing I can do about it. I just do what I can to keep myself alive. I have never gone this hungry before. This is the worst year, because in the past, at least there was something to eat. There's nothing to eat around here. It's hard."

Like many Zimbabweans, Phiri says she can only put her trust in God. Where she lives, they've had no running water for months, and there are daily power outages for those lucky enough to have electricity. Feeling dizzy and nauseous, Phiri sits down in the shade on a cushion of bare corn cobs and crackly dry leaves, with a modest bowl of golden-colored kernels at her feet. She said she would grind the corn to eat with her grandson. Her last meal consisted of a wild root called manyanya.

Phiri lives in the remote Doma area, once a top grain-producing district of Zimbabwe. Now people around the area and in other parts of the country are simply going hungry. Many are foraging in the bush for wild berries and guavas.

It's now the matamba season, but the round, hard-skinned fruit has to be ripe to be safe to eat. Experts tell you that in desperation, villagers are picking matamba and smothering it with donkey or cow dung so that the fruit will ripen rapidly out in the sun.

President Robert Mugabe's critics blame his land reform and redistribution policies for triggering the current food crisis and economic meltdown. Productive white-owned commercial farms in this region used to be part of the Zimbabwean miracle — the regional grain basket — until they were occupied by Mugabe allies, and many farmers and workers were driven from their lands.

Richard Lee, the southern Africa spokesman for the U.N. food aid agency — which is already feeding millions of Zimbabweans — warns that the crisis will only get worse.

"The food situation in Zimbabwe is already very serious in very many parts of the country," Lee says. "And as we go through the next few months, it's going to become critical in very many parts, and we're still four and a half months away from the next harvest."

Running Out Of Resources

The U.N. says that a little less than half of Zimbabwe's population — about 5 million people — will need international food assistance by the end of the year, with talk of a full-scale humanitarian emergency. Lee says the World Food Program is feeding 4 million people this month alone, but that stocks will run out by year's end.

"At the moment, we have no food supplies for distribution in January and February, just when the crisis is reaching its peak," Lee says. "So we can get to enough people in Zimbabwe, we can provide them with sufficient assistance, but we need additional resources, and we need those additional resources now."

The World Food Program says donors have failed to respond to its international appeal last month for $140 million to buy food for hungry Zimbabweans. So as the country's politics remain deadlocked, the food crisis is getting worse, compounded by staggering inflation as well as chronic shortages of fuel, foreign exchange, local currency and the most basic goods.

All this has forced Zimbabweans to become even more thrifty — and more resourceful.

"You never stop, you never rest, because if you rest, you will starve and the family will starve — to death," says Shingirai Chayamiti, a barter trader and father of three who sits under a shade tree on the side of a highway. "The food situation is too bad. It's critically too bad. Things are going worse and worse each and every day."

Two years ago, Chayamiti gave up his city job and a meager manager's salary and took to the road. He's been on the move ever since, trekking between distant urban areas and the countryside. On the side of the highway, he was watching over 800 pounds of corn in sacks, waiting for transport to the capital, Harare, but only a couple of cow-drawn carts trotted by.

"I will be taking back maize, wheat, soybeans in exchange for sugar, salt, bars of soap, cooking oil, shoes, sandals, used clothes and a variety of things, and make this barter exchange," Chayamiti says. "At least my family survives. I can make two ends meet, you see."

He says he has done good business bartering the crops.

Chayamiti says a 12-inch bar of green laundry soap exchanges for about 10 pounds of corn. He had been hauling his barter load across Doma district, going from village to village and farm to farm for about a month and was only now heading back home to Harare, with a supply of the staple, corn, for his family to eat.

In three weeks, he will again leave his home in the city, armed with barter goods, heading for more villages and farms to exchange them for food.

Along the highway, a small group of children crowd around playfully. Each one is carrying a dirty old plastic bottle, where they had placed a collection of grain — corn kernels, green soybeans and anything else they'd picked up from the roadside that had fallen from the broken sacks of the barter traders.

Farmers, villagers and townsfolk alike says that some Zimbabweans are reduced to plucking undigested corn kernels from cow dung, which they wash, pound and then cook. That could be tonight's supper.