Accessibility links
In Italy, Feminism Out, Women As Sex Symbols In Opinion polls indicate that the showgirl is the No. 1 role model for young Italian women. Women dominate in advertising and TV shows, but the presence of women in the Italian work force, in management and in politics is drastically lower than in the rest of Europe. Some blame Prime Minister Silvio Berlusconi.

Listen
In Italy, Feminism Out, Women As Sex Symbols In 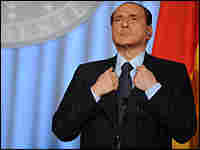 Some charge Italian Prime Minister Silvio Berlusconi with the emphasis on, and prevalence of, women in advertising and television. Giuseppe Cacace/AFP/Getty Images hide caption 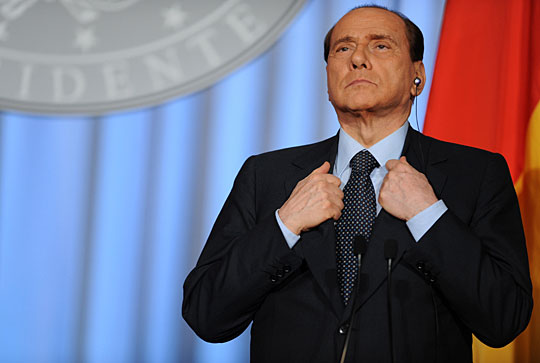 Some charge Italian Prime Minister Silvio Berlusconi with the emphasis on, and prevalence of, women in advertising and television. 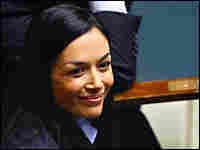 Minister of Equal Opportunities Mara Carfagna, a former showgirl, has been a flashpoint for some Italian feminists. Vincenzo Pinto/AFP/Getty Images hide caption 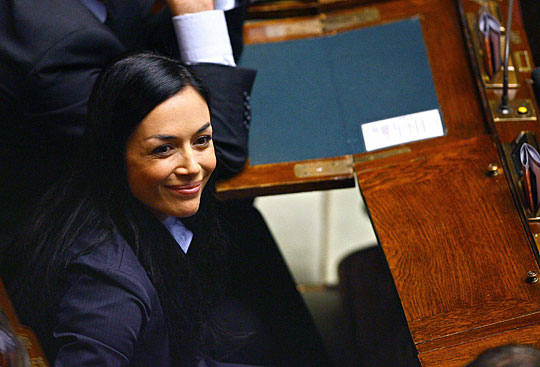 Minister of Equal Opportunities Mara Carfagna, a former showgirl, has been a flashpoint for some Italian feminists.

Americans and northern Europeans visiting Italy often comment on the sheer quantity of exposed female flesh in advertising and on TV shows.

That exposure is inversely proportional to the presence of women in the labor force, in management and in politics.

Feminists place a lot of the blame for the commercial use of the female body at the door of Italian Prime Minister Silvio Berlusconi.

A recent popular TV show was a contest for two showgirl slots on a top satirical program. More than 5,000 women applied, and the prime requisites were perfect bodies and the ability to dance on tabletops.

Both on public television and on networks owned by Berlusconi, who also is a media tycoon, scantily dressed women can been seen — but rarely heard — on all types of programs, from quizzes to political talk shows.

Opinion polls indicate that the showgirl is the No. 1 role model for young Italian women, including 21-year-old student Livia Colarietti.

"If I were a little thinner, I would have joined the contest to become a showgirl," Colarietti says. "I enjoy those shows. I really like to watch them."

One very successful showgirl is Mara Carfagna, who left an uncertain singing career for politics. Berlusconi chose her for the slot of minister of equal opportunity — and both denied media reports that they were having an affair.

"I took strong position because it is absolutely a scandal," Guzzanti says. "Here we have more a pinup exactly than a showgirl, someone showing her body, and she became minister of equal opportunities."

Veteran feminist Grazia Francescato concedes that Carfagna is winning with her ways.

"We have gone from equal opportunities to equal opportunism," Francescato says. "You try to be very appealing to the other sex, especially to very powerful men. "I am very, very disappointed by women."

Feminists were powerful in the 1970s, winning universal health care and legalization of divorce and abortion, but then there was a backlash.

Today, Italy has the lowest percentage of working women in Europe. Only 2 percent of top management positions are held by women — that's even behind Kuwait — and only 17 percent of the members of parliament are women — less than in Rwanda and Burundi.

"To sell your body for a calendar, for a career, is not considered now so bad for many young women," says social scientist Elisa Manna, who has studied this issue's impact on Italian society. "This kind of attitude is connected to television, because they have this kind of model in every hour of the day."

With remote in hand, a viewer can zap from game shows with giggling girls in bikinis to prime-time anchorwomen with plunging necklines. All of this sexiness on television began with the birth of Berlusconi's networks in the 1980s.

The 72-year-old prime minister speaks openly about sex. He recently bragged, "I sleep for three hours, and still have enough energy to make love for another three."

Female Solidarity Out Of Fashion

The Berlusconi TV model is widely seen as having shaped Italy's contemporary society, and journalist Lilli Gruber says feminism and solidarity among women are out of fashion.

A former TV anchorwoman who resigned from public television in protest over Berlusconi's control of the media, Gruber says most women appear unwilling or unable to assert themselves and too weak to fight.

"To fight back against growing sexism, growing violence against women and domestic violence especially, fight back all these politicians who don't move an inch in order to allow women to be in charge and take on responsibilities," Gruber says.

She points out, however, that the majority of Italians now studying in universities are women — a generation that she believes won't be passive and might even succeed in breaking down Italy's old-boy network.