Accessibility links
Kanye's Latest A Deeply Personal Departure The Chicago rapper's new album, 808s and Heartbreak features him singing instead of rapping, but he's filtered his vocals through the voice processing system known as Auto-Tune, an increasingly popular trend among pop artists. The result is a melancholy, intimate and decidedly quirky effort.

Read another take on the album, from reviewer Andrew Noz.

Kanye West's new album, 808s and Heartbreak, is a departure for the Chicago rapper. Not only does he sing on the entire album instead of rapping, but he's filtered his vocals through the voice processing system known as Auto-Tune, an increasingly popular trend among pop artists. The result is a melancholy, intimate and decidedly quirky effort.

As a friend recently joked, "Who knew 10 years ago that Cher would predict the future sound of hip-hop?" Her "Believe" was the first major hit featuring Auto-Tune, which corrects off-pitch notes, but when pushed to the extremes, leaves behind a telltale electronic signature.

What began as a little-known production tool has exploded into pop music with artists such as T-Pain and Demarco recording entire albums with the program's strange, quasi-robotic sound. Rappers including Lil Wayne and Snoop Dogg have played with Auto-Tune, too, but no rapper has taken things as far as Kanye West on 808s and Heartbreak.

Skeptics predicted Kanye's indulgence in a gimmick like Auto-Tune would result in an artistic train wreck — perhaps, one day, we'll look back on this as Kanye's equivalent to The Ethel Merman Disco Album. But for now, Kanye's Auto-Tune vocals are schtick with a strategy as his ghostly, mechanical vocals enhance the album's already despondent atmosphere.

The unspoken presence haunting the album is the unexpected death of Kanye's mother a year ago. He devoted several songs explicitly to her when she was alive, but here, he conspicuously avoids mentioning his mother at all. It's impossible not to read his constant verses about lost love and romantic distress as a thinly veiled transference of filial grief. But the Auto-Tune creates a strange dissonance here. By sounding inhuman, his pain sounds detached, distant. This isn't Otis crying out a lover's prayer or Marvin wailing the inner-city blues. Kanye sings of heartache, but it's a frigid, passionless despair.

Kanye began his career with the warm, analog sound of lush soul samples, but this album is filled with wheezing synthesizers, hyper-processed string arrangements, and stripped-down club beats made from clicks and claps. The Auto-Tune vocals are a perfect fit here, especially with an album whose sonic stamp is already so steely and mechanized.

Not all of Kanye's fans will likely warm to the chilly 808s and Heartbreak, but even if it's destined to be an acquired taste, it's worth sampling. It's a deeply personal album — not just because of Kanye's family tragedy — but for its willingness to take a leap of creative — and indulgent — faith. Kanye has always tried to push hip-hop's musical conventions forward. Even if his new album is his most off-kilter, it doesn't mean he's missed the mark. 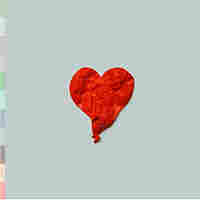 The cover of 808s and Heartbreak. hide caption

Kanye West's new album is built on two false premises: that from great pain comes great art, and that old-fashioned rapping is not an adequate vessel for such suffering. Chronicling the fallout of his failed engagement, 808s and Heartbreak is the rapper/producer's most adventurous record to date. And it's nothing short of a complete mess.

Inspired in equal part by fetishes for 80s pop sentimentality (complete with Factory Records-inspired artwork and a partial Tears For Fears remake) and, yes, the Roland TR-808 drum machine, 808s is built from some fantastic raw sounds — the taiko drum trance of "Love Lockdown", the sparse blip of "Say You Will", the haunting cross-section of tender pianos and guest rapper Young Jeezy's menace on "Amazing." But these ideas never gel. As a sheer aesthetic exercise, stripping the modern hip-hop sound bank to its starkest form is an interesting one, but it's not nearly enough to hinge an album on. Especially when the principal rapper instead hinges the album on his singing.

The problem is that, unlike rapping, singing is not a learned skill. Bulldog tenacity, even if Kanye had been taking singing lessons, can only get you so far if you lack a naturally great (or at least memorable) voice. Even with the corrective properties of the robotic Auto-Tune effect, Kanye's a particularly incompetent and charmless vocalist.

When like-minded futurist preppy Andre 3000 of Outkast made the "my feelings are bigger than hip-hop" leap with The Love Below, he compensated for his vocal inadequacies by actually writing great songs. But Kanye's lyrics are at best unmemorable — if not unbearable — simplistic cliches straight out of high school angsty poetry. Short on adjectives, everything is "cold" to Kanye: his ex, his story, the winter, the drinks. His compositions are wordy, meandering and completely devoid of structure. Choruses appear and disappear for no reason in particular. He's yet to realize that writing a great song entails more than merely setting a rap verse to melody.

Tellingly, the record's strongest cut is "Heartless" — the closest Kanye comes to traditional hip-hop. Half rapping, half singing, the classic Kanye balance of self-deprecation and self-confidence remains intact, giving life to cutesy couplets like "How you could you be so / Dr. E-vil?" The track — sounding something like if Wu-Tang's the RZA was rocking Casio pan flute presets instead of Thelonious Monk loops — is a reminder of what the album could've been had Kanye just reeled in his pretenses.

As it stands, 808s is a sketchbook. It is laziness disguised as minimalism and vulnerability. Emcees should know their limitations.