Listen
'Pray The Devil Back To Hell' Tells Of Triumph

The new documentary, Pray the Devil Back to Hell, tells the extraordinary story of a group of Liberian women who banded together to end their nation's second bloody civil war.

NPR's Tony Cox talks with one of the women, Leymah Gbowee, about how she mobilized a coalition of Christian and Muslim women to stand up to Liberia's violent warlords. 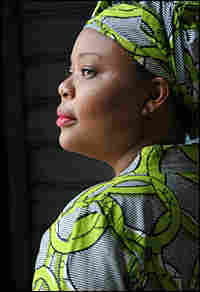 Liberian peace activist Leymah Gbowee; her story is one of those told in Pray the Devil Back to Hell. Michael Angelo/Wonderland hide caption 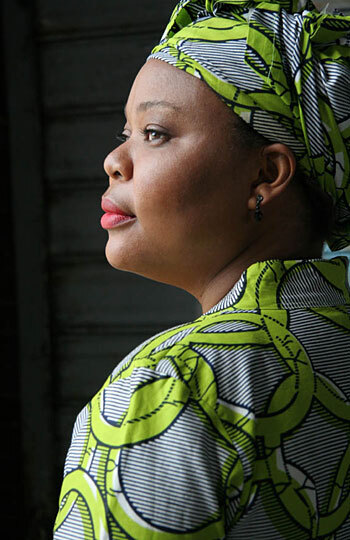 Liberian peace activist Leymah Gbowee; her story is one of those told in Pray the Devil Back to Hell.

Pray The Devil Back To Hell

This film is not yet rated. 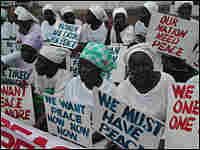 Liberian women demonstrate at the American Embassy in Monrovia, Liberia, at the height of the civil war in July 2003. Pewee Flomoku hide caption 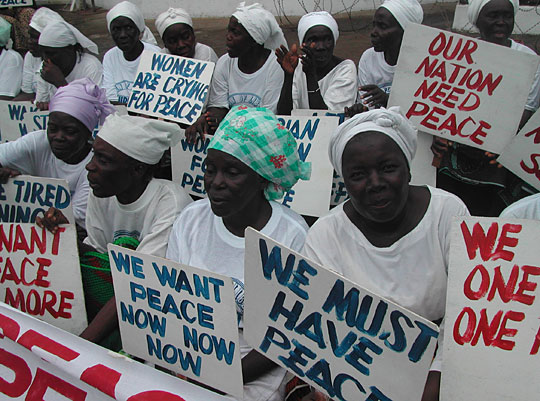 Liberian women demonstrate at the American Embassy in Monrovia, Liberia, at the height of the civil war in July 2003.

Few truisms have proved more durable than the one holding that women, far more than men, love peace.

From the plays of Aristophanes — whose Lysistrata urged her Athenian sisterhood to withhold sex in order to bring about the end of the Peloponnesian War — to the real-life activism of Iraq War challenger Cindy Sheehan, there's ample evidence of wives, mothers and daughters using moral suasion to argue for an end to male-instigated conflicts.

And recent history has no more stirring example than the fiercely courageous Liberian women who banded together to help bring down dictator Charles Taylor in 2003 and put an end to a decade of civil strife that had claimed hundreds of thousands of lives.

In telling their story, Gini Reticker's passionate documentary Pray the Devil Back to Hell uses testimony from women who joined forces, with parallel efforts in the Christian and Muslim communities, to fight back with moral rectitude as their sisters and daughters were being raped, their husbands murdered, their babies maimed.

Leymah Gbowee recalls turning a dream she had — of gathering women to pray for peace — into public activism. Other women recount horrific tales of the ways in which gun-toting 10-year-old boys brutalized whole towns.

And Reticker's camera follows along as the women slowly, patiently create a national movement that engages in increasingly dangerous confrontations with a ruthless dictator — and ultimately, at peace talks, with brutal revolutionary warlords who are at least as dangerous as the man they're all fighting.

The director captures the preening, manipulative, bazooka-wielding men who are causing the nation such grief, contrasting their manner with the sad but implacably calm resolve and dignity of Gbowee and her followers.

That the men end up looking irresponsible and foolish is no surprise, but the confrontations are at times startling — say, a moment in which the women, in frustration at the boisterous excesses they witness at a peace conference, blockade the negotiators inside a conference room, refusing to let them leave.

Without their guns, the men prove surprisingly helpless. And when a representative of a larger pan-African community tells them that if they want the women to stop treating them like children, they must behave responsibly, you sense a corner has been turned.

Had the stakes not been so harrowing, the moment would have been comic. Instead, it proved cathartic: The next time Liberia went to the polls, a woman was elected president. (Recommended)

More About 'Pray The Devil Back To Hell'