Accessibility links
Lessons From Tenn., A Southern GOP Stronghold Although Barack Obama carried North Carolina and Virginia, other parts of the South remained solidly red. Residents of one Tennessee county say the GOP can regain its strength nationwide by focusing on core conservative values. 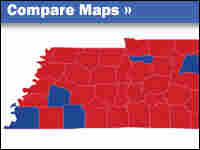 Republican presidential candidate John McCain did so well in Tennessee on Nov. 4 that he even carried some counties that had chosen Democrat John Kerry over President George W. Bush in the 2004 election.

Across the country, Barack Obama won more than 300 counties that Bush carried in 2004, "flipping" them from Republican red to Democrat blue. But, he didn't turn any of Tennessee's Republican counties in his favor; Obama carried only six Tennessee counties, compared with 18 won by Kerry in 2004.

In fact, of the 45 counties nationwide that flipped from Democrat to Republican, 12 are in Tennessee. The rest of the 45 counties, with the exception of three in Pennsylvania and one in Ohio, are also in the South.

In Sullivan County, Tenn., in the picturesque southern Appalachian Mountains, visitors will find something they won't see much of in other parts of the country: Republicans who have something to celebrate.

"It's a great day for Sullivan County and the state of Tennessee," county Republican Chairman Jason Booher declared last week, when the party executive committee met for the first time since the election.

Although the election brought a Democratic resurgence to parts of the South — Barack Obama carried North Carolina and Virginia, and Democrats also took over Senate seats in those states — other areas of the region remained solidly Republican.

What happened in Sullivan County was nothing short of a GOP landslide. In the presidential race, Republican Sen. John McCain won 70 percent of the vote; most other Republicans topped 60 percent; and voters ousted an incumbent Democratic state legislator, which helped the GOP take control of Tennessee's House for the first time in 140 years.

Tony Shipley, who won that state House race, says the county has become one of the most Republican in the nation.

"These people are solid, hard-working, apple-pie-type Americans," Shipley said. "I have fond memories of chasing greased pigs here, so there's a long tradition of Americana here — strong Christian values here amongst these people."

Sullivan County is one of many parts of southern Appalachia where Republicans ran especially well. From Kentucky south to Mississippi and Alabama, McCain won nine out of every 10 mountain counties. In most of them, he even improved upon President Bush's vote percentage four years ago.

Nownes says it would be naive to think race was not a factor for some Appalachian voters — though he says its importance varied throughout the region. Democrats say it was an issue in Sullivan County, where Republicans mailed out a controversial ad attacking Obama, House Speaker Nancy Pelosi and the legislator Shipley was running against, Nate Vaughn, who is black.

In the ad, photos of the three Democrats' heads were pasted on the bodies of large blackbirds with a caption calling them "a liberal big government flock." Republicans deny the ad was racist, but Vaughn thinks it played a big role in the election.

"I think a lot of fear was brought up about having Barack Obama as president — because he was black, because of what people actually believed he was about," Vaughn said. "I think this was created by people like the Tennessee Republican Party that were just breeding this fear."

Vaughn says neither the Democratic Party nor the Obama campaign tried to counter those ads, and he doubts that it would have done much good if they had, given Obama's low popularity in the area. Indeed, the president-elect hardly campaigned in Appalachian Tennessee at all. Instead, he concentrated on more competitive Southern states, such as Virginia and North Carolina, where he eventually won.

"The Democrats have more or less given up on East Tennessee," said Nownes, the political scientist. "It's sort of a self-fulfilling prophesy. Democrats don't campaign here because they think they're going to lose, and they lose because they really don't spend any resources here."

Not surprisingly, that suits Sullivan County Republican leaders just fine. And as they were celebrating their victories at the party executive committee meeting, several said Republicans nationwide can learn from what worked in the Tennessee mountains.

"Mr. McCain was my choice at election time, but during the primaries, he wasn't, and he wasn't the choice of this part of the country," Kilgore said. "He's not a true conservative's conservative."

Kilgore says he's not sure how important racial issues were for voters in a county that's 97 percent white.

"I know it was in the background," he said.