Accessibility links
Florida Judge Rules Against Gay Adoption Ban A Miami judge rules that there is no rational, scientific or moral reason that sexual orientation should be a barrier to adopting children, finalizing the adoption of two siblings by their gay foster father. 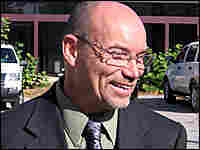 Martin Gill, 47, is now legally the father of two children he has raised since 2004. Greg Allen/NPR hide caption 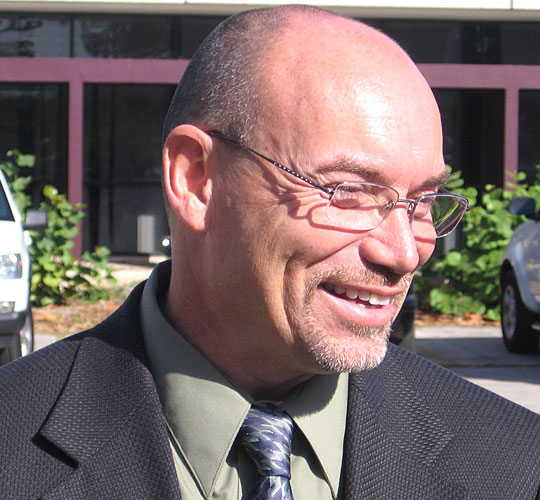 Martin Gill, 47, is now legally the father of two children he has raised since 2004. 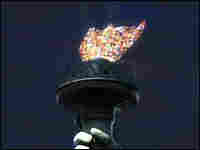 In this video, the ACLU describes its challenge to Florida's anti-gay adoption ban, and the family at the center of the case.
Via YouTube

A Miami judge ruled Tuesday that there is no rational, scientific or moral reason that sexual orientation should be a barrier to adopting children, finalizing the adoption of two siblings by their gay foster father.

After 58 hearings, Miami-Dade Circuit Judge Cindy Lederman said she had no doubts about her decision, which sets the stage for a legal battle that could go to the state Supreme Court. "I know this family fairly well. These children are thriving," she said, declaring in a 53-page judgment that the 8- and 4-year-old brothers would be the legal children of Martin Gill, a gay man from North Miami.

Gill, 47, was elated. "Today, I've cried my first tears of joy in my life," he said after the ruling. "Our family just got a lot more to be thankful for this Thanksgiving."

In her ruling, Lederman said the ban against adoptions by gay people violated the state's equal protection guarantees by singling them out. She noted that the state of Florida permits gay people to serve as foster parents to its most fragile citizens — children who have been abused, neglected or abandoned.

Lederman said there is consensus among researchers that there is no reason to prohibit adoptions by gay people.

"Based on the evidence presented from experts from all over this country and abroad, it is clear that sexual orientation is not a predictor of a person's ability to parent," Lederman wrote in her order. "Sexual orientation no more leads to psychiatric disorders, alcohol and substance abuse, relationship instability, a lower life expectancy or sexual disorders than race, gender, socioeconomic class or any other demographic characteristic."

In addition, the court ruled that the ban denied the children the right to permanency under state law. The biological parents' rights were terminated in 2006, and the children had lived with Gill and his partner for more than four years.

Known as John and James Doe, the children were in bad shape when the Florida Department of Children and Families took custody of them on Dec. 11, 2004, court documents show. State caseworkers alleged the boys — an infant and a 4-year-old — had been abandoned and were suffering from neglect. The older child had a bad case of ringworm and the baby had an untreated ear infection.

Gill and his partner of eight years at first refused the temporary placement because they were planning to move to Georgia, but they relented in order to give the children a nice Christmas.

Gill, who had been a foster parent to eight children before, said he believed the boys would be in his home only a few months, but as time went on, it was clear that the boys would not be returning to their family.

Gill said he knew he'd have to challenge the state law in order to give them a stable home.

"I felt that the only right thing to do was adopt these children. It wouldn't be right after they were thoroughly bonded with us to give them up to another family. That can be very detrimental to children," Gill said.

Leslie Cooper, the ACLU attorney who represented Gill, said the case brought to light decades of research that shows a parent's sexual orientation has no bearing on how well children do.

While other states have restrictions, Florida is the only state with an outright ban on all gay adoptions. Two months ago, a judge in Key West also found the state law unconstitutional and allowed a gay adoption, a decision the state opted not to challenge.

Florida Assistant Attorney General Valerie Martin said an appeal would be filed on behalf of the state Department of Children and Families.

Neil Skene, special counsel for DCF, said the department must enforce state law. He noted that DCF believes Gill has been a wonderful foster parent.

Gill said the ruling is important to thousands of other Florida children who are in need of homes.

Gill said his sons are overjoyed that they will now have his last name. He said the older child has practiced writing his new name over and over again since the adoption proceedings began.

"I wrote out their new names, and with the 4-year-old, we traced over his name, and with the 8-year-old, he was writing out the name by himself," Gill said. "He [the older child] came to this epiphany, and he said, 'We're all going to have the same last name. That's what's going to make us a family.'"

Written by Deborah Tedford, with reporting by Greg Allen.