Accessibility links
For Some, There's A 'Turkey Day' Dilemma The Thanksgiving holiday, colloquially known as "Turkey Day," can be a soul-searching time for people who usually eat vegetables instead of meat.

Listen
For Some, There's A 'Turkey Day' Dilemma 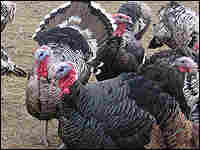 Turkeys at Springfield Farm in Sparks, Md., roam outside in their pen. Nell Greenfieldboyce/NPR hide caption 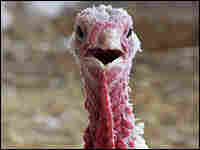 The Thanksgiving holiday, colloquially known as "Turkey Day," can be a soul-searching time for people who usually eat vegetables instead of meat.

"I don't think there's any other American holiday that is quite so associated with killing an animal for the table," says Wayne Pacelle, head of the Humane Society of the United States, based in Washington, D.C. "It's usually a whole turkey. If you're eating beef, you're not kind of eating the whole cow. So there is something about this holiday that puts us maybe a little bit more in touch with this being an actual animal."

Pacelle is vegan, which means he consumes no animal products at all. And he points out that people have plenty of delicious non-meat options to choose from. But still, he says, when he spends Thanksgiving with his family, "there will be some turkey that others eat, and there's nothing I can do about that."

He says a big, roasted carcass isn't tempting for people like him who are committed to vegetarianism. But some people who are just mostly vegetarian might take a bite off the turkey platter, even if they normally don't eat meat.

"There is a large category of people who are eating less meat than they used to, called 'flexitarians,'" says Pacelle. "I'm sure that among that group of people, this may be a day when they choose to eat some meat."

Understanding Where Meat Comes From

Flexitarians are part of a growing trend of people thinking harder about meat. Some people are eating more vegetarian meals for health reasons. For other people, meat is OK but the kind of meat is important.

Every November, for example, hundreds of people drive to Springfield Farm in Sparks, Md., to pick up their holiday meal. Customers can buy a processed turkey and also wander around to see how the animals lived in a roomy pasture.

David Smith, owner of the farm, says his customers are generally "looking to connect with their food, to put a face on it, if you will." He says they want to buy local meat that was raised in a natural way and humanely slaughtered.

Those kinds of concerns are why some people just won't eat mass-produced meat. For example, Jenna Woginrich, author of a new book called Made from Scratch: Discovering the Pleasures of a Handmade Life, lives on a small farm in Vermont where she grows her own vegetables. She calls herself a vegetarian and says she hasn't eaten any meat for about six years.

"I stopped eating meat not because I'm against devouring it, but because I didn't like where it was coming from," Woginrich says. At her family's Thanksgiving, she'd eat a soy-based tofurky.

But this year, Woginrich decided to prepare for the holiday by raising her own turkey. She bought a little bird that soon became a big white one. "I didn't name him," she says, explaining that she didn't want to get too attached because she knew he was destined to become a meal. "He was great. He got along great with the chickens and all of the other farm animals."

Woginrich had no problem with the idea that she was going to eat the bird. "You know, I knew that he had had an amazing life as a turkey, and he would have a humane end to that short but good life," she says. She took him to a nearby farm to have him slaughtered and stored his body in her freezer.

But then she ran into a problem. Woginrich says some meat-eating members of her family didn't want to eat a known animal. "The turkey situation was a big lesson for me because you go into it way, way too self-righteous," she says. "There's a whole spectrum to this and there's a million different viewpoints, even within one family."

She ended up trading the turkey with someone who agreed to teach her dog to herd sheep. "So I'll probably have tofurky again," Woginrich says. "And I'm really glad to know that the turkey I raised is going to be making an amazing Christmas dinner for close friends."

The Farm Sanctuary in Watkins Glen, N.Y., is a farm animal protection group that runs animal shelters for livestock. They also have an Adopt-a-Turkey Project. Tricia Barry, the sanctuary's communications director, is vegan, but she says she can empathize with people who call themselves vegetarians yet still eat meat on special occasions.

"Who am I to judge or criticize someone for, you know, their journey and their path, whatever it might be?" Barry says.

After all, she says, she once went through her own period of cutting back on meat. She didn't quit cold turkey until she actually met a turkey: a bird at the farm named Cinnamon.

"And I actually gave her a belly rub," recalls Barry. "And she rested into my hand, and I felt this living, breathing, alive turkey breast."

It made her think of another turkey breast — the one she had cooked for Thanksgiving the year before. Barry says that was the moment when she went from eating less meat to eating no meat.