Accessibility links
'Milk' Is Much More Than A Martyr Movie Film critic David Edelstein says the Harvey Milk biopic, starring Sean Penn, is one of the most heartfelt portraits of a politician ever made. "The personal and the political aren't just hand-in-hand," he says: "They dance."

Listen
'Milk' Is Much More Than A Martyr Movie 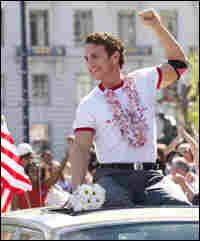 Rated R for language, some sexual content and brief violence.

It's tempting to describe the biopic Milk as a hagiography, a life of a saint and martyr. But that wouldn't be entirely apt, since the movie is buoyant and exhilarating, and since it pointedly reverses the usual trajectory. Instead of forswearing the flesh for a life of the spirit, Sean Penn's Harvey Milk reaches the spirit by surrendering to the flesh, big time.

His salvation begins in 1970, on the eve of his 40th birthday, when he picks up a young Midwestern stud in a New York City subway station. After happy sex, Milk lies beside Scott Smith, played by James Franco, and muses on the life he's been living with his sexual orientation under wraps. Emboldened, he sets off with his new lover for San Francisco's Castro district, for a life to be lived above ground, in the light.

With arrivals pouring in, the Castro is a burgeoning gay ecosystem, and director Gus Van Sant and cinematographer Harris Savides have an easy, open touch, as if they're shooting a documentary. Unlike in Brokeback Mountain, the gay couplings here aren't hallowed; every smooch doesn't carry the weight of the world. The characters are just doin' what comes naturally, even when it's done by hetero actors like Penn.

Penn's transformation is startling. I've never seen smile lines on his face, yet here they are, crevices, going deep; his voice is light, minus low tones. He's unprecedentedly giddy. There's anger, but it never festers — it's channeled into political action.

In the tedious remake of All the King's Men, Penn put Method-acting pauses in the scenes of Willie Stark finding his soapbox voice: He seemed too inward to play a rabble-rouser. Here, he shakes off Method self-attention. For Milk, the personal became political, and Penn opens the windows to his character's soul and gets visibly high on the breeze.

Milk becomes an activist almost immediately; he organizes a boycott of neighborhood businesses that are hostile to gays. When that's successful, he sets out to become the first openly gay elected officeholder in San Francisco.

There's a small amount of drama within the gay community — Milk butts heads with the cautious owner of the magazine The Advocate. But when he wins office on the third try, the threats come from outside, from Anita Bryant's anti-gay ballot initiatives and, later, from Milk's murderer, fireman-turned-supervisor Dan White, played by Josh Brolin in a bowl haircut.

Brolin's Dan White is riveting, the only character in the movie with a meaty subtext, although it's not always clear what that subtext is; the approach of Van Sant and screenwriter Dustin Lance Black isn't overly psychological. We know White's a homophobe; Milk thinks he's a closet case. We see he's desperate to keep his job and feels let down by Milk on the legislative front.

In any case, Milk doesn't see the bullets coming: He's too elated by the theater of politics, by exercising power for the first time. Lovers drift in and out, but we're not entirely sure how Milk could possibly take in a Mexican lover, played by Diego Luna, who is so obviously nuts. The film doesn't probe too deeply, possibly because people from Milk's orbit are still around — and were around the set; more likely because the filmmakers mean to inspire future generations of gay activists. It turns out to be a timely message, with the passage of Proposition 8 in Milk's old stomping grounds.

Good as Penn is, it's too bad he didn't have a chance to show Milk before his gay emergence — not because we need to see the same old coming-out-of-the-closet story, but because the "before" picture, Milk among the straights, would give the "after" picture more weight.

But these are quibbles. Milk is one of the most heartfelt portraits of a politician ever made. The personal and the political aren't just hand-in-hand. They dance.