Accessibility links
Richard Bona Makes You Sing At Basel Jazz Festival In a concert recorded by Swiss Radio DRS2, the charismatic Richard Bona has a heavenly voice and plays a funky bass. His newest CD is Bona Makes You Sweat, and at the 2008 Basel Jazz Festival, he goes further than that. Bona makes you swoon, sing, stand up and boogie with his band from Africa, the Caribbean and the U.S. 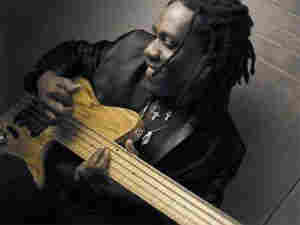 Concert Pick: In an exclusive live moment from the 2008 Basel Jazz Festival, Richard Bona salutes his great friend, the Viennese keyboard maestro Joe Zawinul (1932-2007). Bona says that Zawinul — who worked with Miles Davis and bassist Jaco Pastorius in Weather Report — was the only one who called on every birthday, no matter where Bona was, with the gruff message "Happy birthday, [unprintable jazz-world term of male bonding and affection]." Bona turns a colorful quilt of Zawinul themes into a moving tribute.

Richard Bona was born in 1967 in Cameroon, has lived in Paris and now in New York, and performs worldwide. But he is so personal with his fans that he answers their e-mail on his website.

The vocalist and bassist has been Harry Belafonte's musical director and has worked with the Joe Zawinul Syndicate, Steps Ahead with Mike Mainieri, the Pat Metheny Group, Mike Stern and the Jaco Pastorius Big Band, a noteworthy gig considering Pastorious' massive influence on jazz bass.

Bona opens his concerts with just his voice, invoking the spirits. Then he brings on the band and begins to rock the house at the 2008 Basel Jazz Festival in Switzerland. His band members come from Surinam, Colombia, Cuba, New Hampshire and Long Island, and can go many directions — reggae, African, Euro-jazz, son montuno, to name a few. Bona's lyrics are in his native language, Douala.

In the middle of the show, Bona sets his bass aside and uses pedals to loop and layer his voice. He sounds like a one-man Ladysmith Black Mambazo. "Harmony is colors," Bona says. "You're just painting with sound." Then the percussionists return, leading to an audience sing-along and a big finale to a totally satisfying concert.