Accessibility links
Recorded History: Vin Scully Calls a Koufax Milestone When Los Angeles Dodgers pitcher Sandy Koufax threw his first no-hitter in 1962, the team didn't preserve legendary announcer Vin Scully's broadcast of the game. But a rare recording has surfaced, opening a window on the excitement of that night. 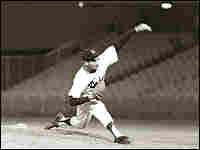 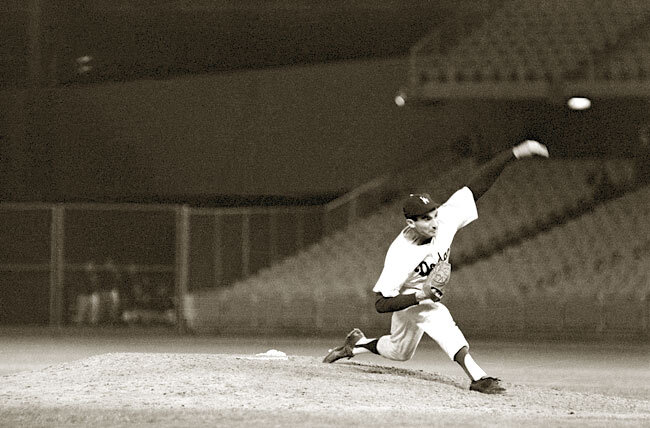 Sandy Koufax throws the final pitch of his no-hitter over the New York Mets at Dodger Stadium, June 30, 1962. 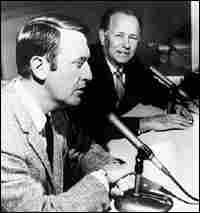 Vin Scully (left) and Jerry Doggett spent 32 seasons together in the Dodger broadcasting booth from 1956-87. This photo is circa 1962 in the Dodger Stadium press box. Los Angeles Dodgers hide caption 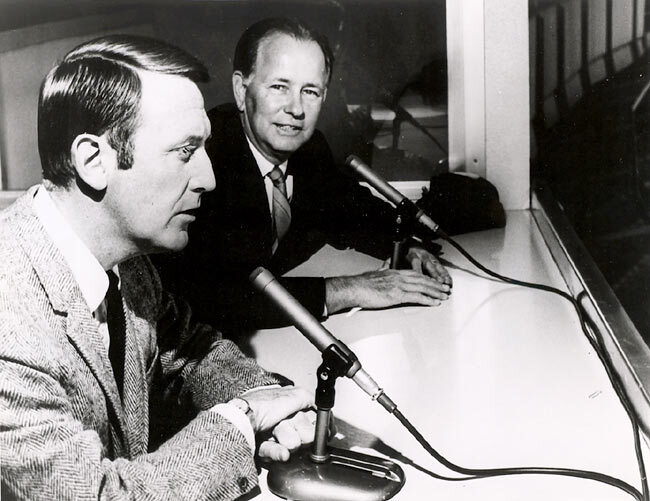 Vin Scully (left) and Jerry Doggett spent 32 seasons together in the Dodger broadcasting booth from 1956-87. This photo is circa 1962 in the Dodger Stadium press box. 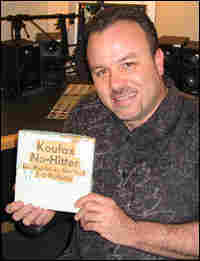 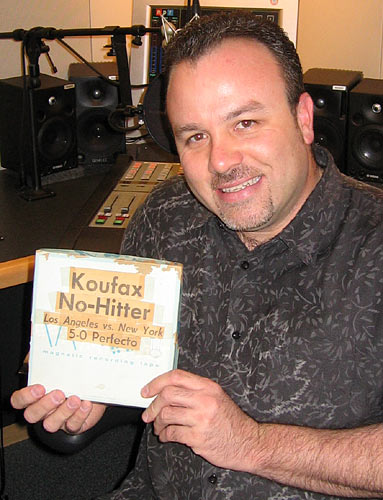 Jim Governale discovered the reel-to-reel tape in family belongings in 1990. 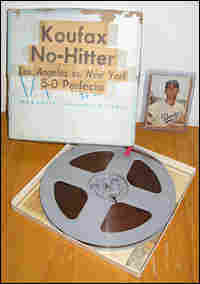 Governale found the audiotape in a box in 1990. Mark Langill hide caption 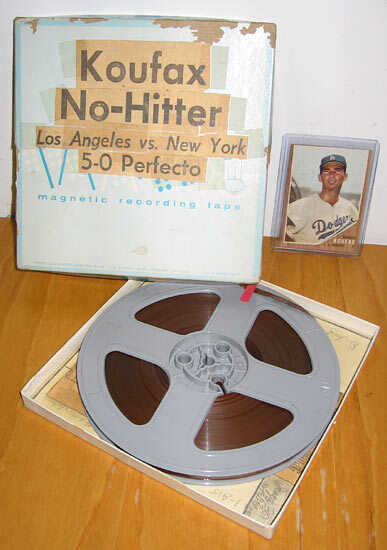 Governale found the audiotape in a box in 1990.

There were three mainstays for the Los Angeles Dodgers in the 1960s: Sandy Koufax and Don Drysdale on the pitcher's mound, and Vin Scully in the broadcaster's booth.

On June 30, 1962, with the Dodgers facing the New York Mets, Koufax pitched the first of his four career no-hitters. Until recently, no one knew Scully's call of that game had been recorded.

"The Dodger broadcasts back then weren't archived," says Mark Langill, the team's historian.

There was a copy of the September 1965 broadcast of the Dodgers-Cubs game in which Koufax pitched his final no-hitter — and a perfect game.

"When he retired the first 24 batters against the Cubs in '65, Vin Scully called into the studio and said, 'Let's make a recording,'" Langill tells Renee Montagne.

But such wasn't the case three years earlier when Scully, who has been broadcasting Dodgers games since 1950, was calling Koufax's first no-hitter.

"This was so unheard of, when we first thought that it could exist, there's just no way that there's a recording of this because it would have surfaced after all these years," Langill says.

But thanks to Jim Governale, who is a broadcaster himself in Los Angeles for Talk Radio KKLA, a tape of the game has come to light.

Governale's uncle, 14 at the time of the 1962 Dodgers-Mets game, was tinkering with a reel-to-reel machine when he decided to record the game from the radio.

"I think he could kind of sense history in the making listening to the Dodgers game," Governale says.

Governale discovered the tape in 1990, when his grandfather died.

"My grandmother had a box that she found, I think in the garage, of several old reel-to-reel tapes," Governale says. "I saw one of the boxes... and there was a newspaper clipping on it. It says, 'Koufax No-Hitter.'"

"I saw it and it piqued my curiosity and I thought, 'Wow!'

He thought about selling it, "but I have so much respect for Vin Scully that I thought, I've really got to get this into Vinnie's hands."

Governale hasn't met Scully yet. "I'm just like any other probably normal fan. I look upon Vin Scully as just this regal, incredible human being with a great voice. When I do finally get the chance to meet him, I'll be at a loss for words."

Langill says listening to Scully call the game's final pitch now shows what has made him such a special voice in baseball.

"In that moment, the next batter coming to the plate ... he could've whistled a single to center field and broken everyone's heart. And Vin Scully is able to, in that moment, keep his cool but keep us also on the edge of our seat, wondering if Koufax is going to get that last out."