Accessibility links
Hugh Jackman: Boy From Oz Is 'Australia' Hero The star of Oklahoma and the X-Men franchise is the rare actor who can headline a musical and a marquee picture. His latest, with Nicole Kidman: Baz Luhrmann's swooning historical epic. 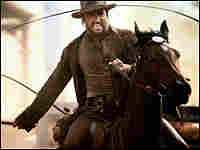 The man with the whip hand: Australia's Hugh Jackman knows how to sing, dance, ride a horse and romance the ladies — and at least in Broadway's The Boy From Oz (below, with Jackman as entertainer Peter Allen), he's been known to make eyes at the gentlemen, too. Twentieth Century Fox hide caption 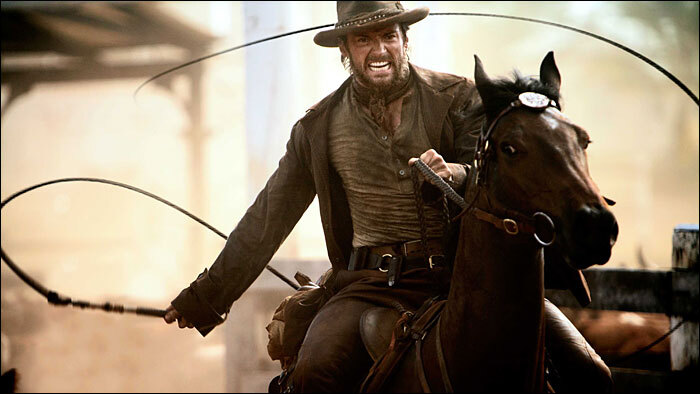 The man with the whip hand: Australia's Hugh Jackman knows how to sing, dance, ride a horse and romance the ladies — and at least in Broadway's The Boy From Oz (below, with Jackman as entertainer Peter Allen), he's been known to make eyes at the gentlemen, too. 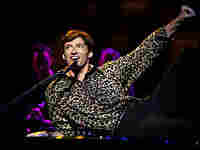 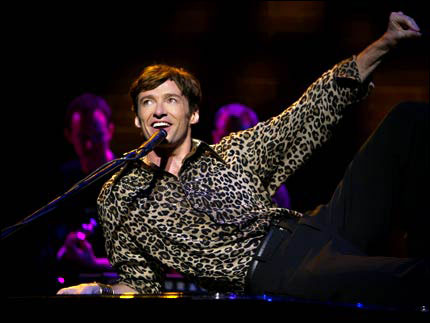 'Not The Boy Next Door'

'Oh What A Beautiful Morning' 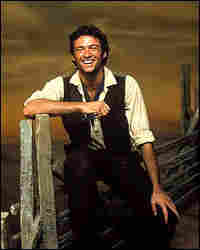 Everything's going his way: Jackman (as Curly in Oklahoma) says his "top 100" acting memories have been created onstage. hide caption

On Learning To Ride Horseback

On Making A Hero's Entrance

On The Business Of Movie Marketing

Actor Hugh Jackman, the star of Oklahoma in London and the X-Men summer-blockbuster franchise, is the rare actor who's proved he can headline both a high-ticket musical and a big-budget Hollywood action picture.

It's the story of an aristocratic Englishwoman (Nicole Kidman), a rough-hewn cattle drover (Jackman) and the sprawling nation that's home to both the director and his two stars.

It's a nation with complicated colonial legacies that have plenty of resonance, especially in this historical moment, with our own.

As Jackman tells NPR's Michele Norris, President-elect Barack Obama might have had fewer career options if he'd been born where Jackman grew up.

"If he was in Australia, with one black parent and one white parent, he would have been taken from his family," Jackman says.

"He would have been institutionalized, probably told his parents were dead, then made as 'European' as possible, or as 'white' as possible, and then taken out to, basically, serve in a menial [job] in European society."

They're called the Stolen Generation, the 100,000-plus Aboriginal children who were taken from their families as part of a now-discredited ethnic-assimilation program that lasted for nearly 80 years.

"That didn't stop until the '70s," Jackman says. "We didn't apologize to the Stolen Generation until this year. ... It was a massive step forward, a very emotional moment, and something that the entire country felt great relief from."

That shared national shame is one of the central themes of Luhrmann's Australia.

In the audio version of this story:

• the reaction of Jackman's own mixed-race son, Oscar, to Obama's election

• how Australia's themes resonate in the actor's own life

... and whether that rumor about his radio-reporter past has any basis in fact.

Click the red "Listen Now" button above to hear the conversation.