Accessibility links
Excerpt: 'Lost in Uttar Pradesh' This collection belies the tension between the author's Midwestern memories and exotic longings. 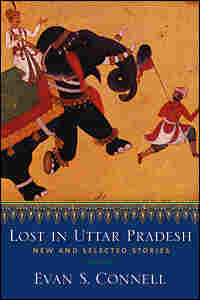 The bawling animal was part of a dream, but then Katia opened her eyes and heard it again. She lay in bed listening. Again she heard it. There were no cattle this high on the mountain. She threw the blankets aside and rushed to the window. At the edge of the clearing a pregnant cow was lurching up the slope, its eyes wild with terror. It stumbled against a log, fell to its knees, and got up clumsily. Strands of frothy saliva swung from the cow's muzzle. Katia watched it urinating and dropping pies while it attempted to run. The cow seemed to be trying to go downhill but for some reason it could not. The animal bawled and turned frantically toward the left and then toward the right, all the while staggering higher. She could not understand what was wrong with the cow, which plainly had lost its mind — rearing and fl inging its head around as if that might solve the problem. Then she saw the lion. It was not a very big lion, not fully grown, but it was no bobcat. This was four times the size of a bobcat, with the heavy grace of a lion and the features of a lion, but the way it followed the cow was unnatural. It did not behave the way a lion should. Twenty yards behind the cow, which now and then jumped awkwardly, crept this adolescent lion, which did not appear to be excited or even very much interested, as though the two of them were circus animals trained to act out a scene. We do this every night, the lion seemed to say, what a bore. So he would lift one paw and set it down, then another, crawling forward without enthusiasm. Showing his broad lion face and stubby ears, his tail brushing the rocky ground like a rope, playing his part almost with embarrassment, he looked from side to side as though expecting the trainer's whip. His face gleamed with life and it was clear that he thought while he looked about. Oh yes, he said, we've done this many times. And a paw reached forward tentatively because the hard ground was littered with pine cones and he was a domestic lion unaccustomed to the wilderness. The morning is cold, he explained. The wind flows down from the peaks and I am hungry, but I will have breakfast pretty soon. Oh yes. All of this he seemed to be saying while he guided the hysterical cow up the mountain. Then out of the snowy pines flashed an irritated blue jay, but the lion paid no attention; troubled by something on the wind, disturbed, inquisitive, the lion swung his face toward the cabin and Katia knew beyond doubt that he was aware of her behind the glass. His focused glare was turgid with meaning — elemental, undisclosed, sealed within his nature. She wondered if the lion's expression might be different if her husband stood beside her at the window. And if at this instant the lion should speak, what would he say?

Perhaps he would explain why he was guiding the cow up the slope. Well, don't you see? I was hungry and have found what I went looking for. I am within my rights. That is what the lion might point out. Then, having observed Katia, he slid forward like a snake because he did not want to step on a sharp rock or a pine cone. Oh, he was within his rights, yes, this almost affectionate lion who ignored the frantic creature just ahead. Katia saw that he had no intention of leaping on the cow, which seemed horrible — as though the lion had acquired a human brain. Each time the cow turned one way or the other so that she might go down the mountain, well, this patient young lion would lope the same direction far enough to prevent her from doing as she wished. And if she stopped for a moment because she was out of breath, well, he would pause, stroking the air with his tail. He was not in a hurry. Nevertheless, they ought to keep moving. Let us proceed, he suggested. Before long the journey will end. Oh yes, pretty soon. Five minutes. Ten minutes. Have you rested enough? Then suppose we climb a little higher. Come now. Katia realized that although she was in no danger she was shuddering with fright as well as from the cold. She thought about getting a sweater or jacket, but she could not leave the window. Now they were dancing — the immensely gravid cow lunging this way or that, her elegant partner following, the terrible dance whirling always a little higher. Oh, higher, if you please! Yes, that's right, that's where we shall go, whether you agree or not. And you will not see your friends or your home again because I am planning to eat you. You understand, don't you? Of course you do. You are not very smart, but you realize that you are going to be eaten. I can tell from the way you act that you know what I have in mind. Now let's be on our way. A little higher, not much. I could if I wished eat you right this moment, but I detect the presence of enemies so we must continue up the mountain until I decide we have reached a proper spot for breakfast. And you are the breakfast. Oh yes! Ho ho! Now let's be off. So they danced across the clearing. They had emerged from a grove of aspen behind the stream and Katia guessed that the cow had been driven from Gus and Betty Pruitt's ranch. Or maybe the cow unwisely decided to take a walk. Whatever happened, they must have been climbing quite a while because the Pruitt ranch was far below. From a granite outcrop beyond the shed it was possible to look down and make out black dots in the valley, which were cattle. She might have seen this particular cow although she hoped not. It shouldn't matter, but for some reason it did. Now they had stopped because the cow was blowing. The lion acted less considerate. Katia thought she heard him growl. Maybe the lion did growl because the cow bucked stupidly — a queer, futile bucking motion — and threw her muzzle at the sky before she resumed the climb.

Katia wondered if the lion remembered the cabin, if it remembered seeing her inside. Perhaps it would bound across the clearing snarling and screeching to crash through the glass. It could do that. It might. She felt the solid thumps of her heart, she knew she was vulnerable and mortal. She watched the lion pick up one hind leg and daintily extend it a few inches while the half-developed body eased forward. The cow sensed this. She knows, Katia thought. What else does she know? Almost nothing. She can't be intelligent. And it seemed to Katia that the dance of death was not merely horrid but unjust — terrifying because the lion was going to eat both the cow and the unborn calf. She thought about running to the storage room for her husband's rifle and running outside to confront and kill the lion. She imagined doing this. Yet she disliked and mistrusted the rifle, which was a hateful object. Not once had she fired it. She had never touched it. Her husband would be able to kill the lion, she felt certain of this, but he was in Glenwood Springs for the twentieth reunion of his high school class and he would not come home until tomorrow. He would run outside and shoot the lion, but he was not here. I might be able to hit it, Katia thought. Suppose I shot the awful thing, then what? She looked through the glass with a troubled expression as though she were in a box at a theater and could do nothing except watch. She resented the fact that she was not a man. It occurred to her that she might open the window and shout at the lion and wave her arms. Or she could get a frying pan from the kitchen and beat on it with a spoon. Maybe the lion would run away. No, it would not. Whatever she did would be useless; she could not prevent the lion from doing what it had resolved to do. This seemed intolerable. She realized that she had covered her mouth with both hands to keep from screaming, and just then she noticed a quick movement outside. There on a tree stump sat a chipmunk. He sat upright, clasping a seed between his paws. He, too, was watching. He sat on the stump like a little person, fascinated by what was happening beyond the woodpile on the opposite side of the clearing. He sat erect, dumbfounded, one glossy eye appalled and shocked. Katia suddenly felt stronger because the chipmunk agreed with her.

Excerpted from Lost in Uttar Pradesh: New and Selected Stories by Evan S. Connell. Copyright © 2007 by the author and reprinted by permission of Counterpoint. All rights reserved. 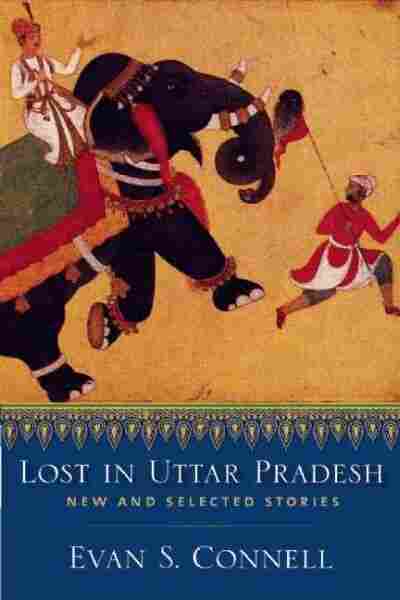