Accessibility links
Why A Turkey Is Called A Turkey : Krulwich Wonders... The bird we eat on Thanksgiving is an exclusively North American animal. It is found in the wilds of no other continent but ours. So why is this American bird named for a Eurasian country?

Listen
Why A Turkey Is Called A Turkey 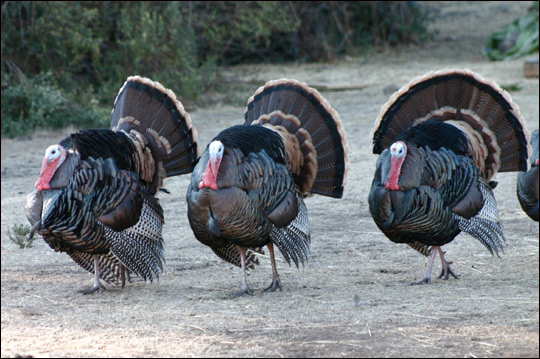 The bird we eat on Thanksgiving is an exclusively North American animal. It is found in the wild on no other continent but ours. It evolved here. So why is this American bird named for a Eurasian country?

To find out, I went back to an interview I did almost 30 years ago on NPR's Morning Edition with Mario Pei, a Columbia University professor of Romance languages, who died shortly after our conversation.

I return to his answer because it is still the best one available.

First, in the 1500s when the American bird first arrived in Great Britain, it was shipped in by merchants in the East, mostly from Constantinople (who'd brought the bird over from America).

If a product came to London from the far side of the Danube, Londoners labeled it "Turkey" and that's what happened to the American bird. Thus, an American bird got the name Turkey-coq, which was then shortened to "Turkey."

Or…Theory No. 2 (and maybe both theories are correct): Long before Christopher Columbus went to America, Europeans already had a wild fowl they liked to eat. It came from Guinea, in Western Africa. It was a guinea fowl, imported to Europe by, yes, Turkish merchants. It was eaten in London. So it got the nickname Turkey coq, because it came from Constantinople.

When British settlers got off the Mayflower in Massachusetts Bay Colony and saw their first American woodland fowl, even though it is larger than the African Guinea fowl, they decided to call it by the name they already used for the African bird. Wild forest birds like that were called "turkeys" at home.

The point is for 500 years now, this proud (if not exactly brilliant) American animal has never had a truly American name.

And just to keep this ball rolling…all over the world, people now can eat American Turkeys, but they don't call them Turkeys.

Across Arabia, they call our bird "diiq Hindi," or the "Indian rooster."

In Russia, it's "Indjushka," bird of India.

And what, we wondered, do the Turks call our turkey?

Well, they call it "Hindi," again, short for India.

So in 1492, because Columbus wanted to be in the "Indies," our North American bird got robbed of its American-ness, which is why tonight, when you look down at your turkey, don't call it "sahib."