There Ain't Half Been Some Clever Bastards [*]

Hear Charlie Gillett Talk About More Songs From 'Beyond the Horizon' 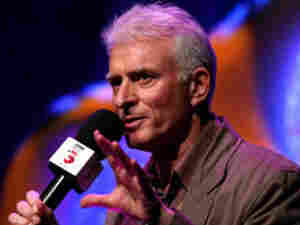 Charlie Gillett is known to radio listeners around the world. He's been their sonic tour guide on The Sound of the World, a weekly world music show on the BBC for more than a decade. Gillett is also well-known to NPR listeners — four of the eight compilation CDs that have grown out of that radio show have been featured on NPR's newsmagazines. His latest is Beyond the Horizon.

His fans may not realize just how long and deep Gillett's interest in music stretches.

Back in the 1960s, Gillett was like a lot of young Britons: He was enthralled by American music, specifically blues and R&B. He went to Columbia University in New York and wrote his master's thesis on the subject. It wound up becoming a book called The Sound of the City. It was published to critical acclaim in the U.S. in 1970, and the following year in Britain. The response there landed him a show on the BBC.

Gillett's show, called Honky Tonk, aired on BBC London from 1972 to 1978. And he didn't just play old R 'n' B and blues. Gillett earned a reputation for playing demos from then-unknown British rockers: Graham Parker, Elvis Costello and Dire Straits. He'd also been raving on-air about a band called Kilburn and the High Roads. The lead singer, Ian Dury, asked Gillett to manage the band. Gillett landed them a record deal, but the label folded and Dury moved on. He repaid Gillett for his efforts a few years later: On the B-side of hit single, "Hit Me With Your Rhythm Stick," Dury put "There Ain't Half Been Some Clever Bastards," a song Gillett and his partner had previously published. That made Gillett a few pounds in royalties, as did another hit that soon followed, "Lucky Number" by Lene Lovich, another Gillett discovery.

But around this time, Gillett began to play some African musicians on Honky Tonk. A cousin had brought back some 78s from a trip to Ghana and Nigeria, and they caught Gillett's ear. In 1973, he played Manu Dibango's "Soul Makossa" on his show and fell in love with the sound. The seed was sown. He started playing world music in earnest on Capital Radio — a commercial outlet in London — in the mid-1980s. He finally rejoined the BBC in 1995 and has been there ever since. In 2006, Gillett received the John Peel Award for Outstanding Contribution to Music Radio from London's Radio Academy.

Now 66, Gillett has just released the latest compilation of music featured on his weekly half-hour BBC show. Beyond the Horizon features music from Trinidad, Lebanon and Uzbekistan, among many other stops around the world.

In talking about one of the songs on the two-CD set — a piece by Uruguayan musician Jorge Drexler called "Disneylandia" — Gillett says, "Every time I hear it, I hear another word that I didn't notice the first time. I find that happens a lot with listening to songs that are not in my own language — that you just hear words, not necessarily the meaning. The meaning comes through in the emotion of the singing."

Gillett's wide-ranging interest in and knowledge of music from around the world is not the result of a copious stash of frequent-flier miles.

"The journey is often in my head," he said. "I must admit that I don't take as many physical journeys as people might imagine."

In the end, Gillett is traveling the world through music — without leaving a carbon footprint.