ESPN football reporter Sal Paolantonio has a new book out, purporting to examine "How Football Explains America." As he tells host Liane Hansen, the way the rules are constructed lends the sport a uniquely American mythos.

Mr. JOHN FACENDA (Broadcaster, Sports Announcer): Professional football in America is a special game, a unique game played nowhere else on Earth. It is a rare game. The men who play it make it so.

The late John Facenda could make football sound like a game created by the gods and handed down from Mount Olympus. ESPN Football correspondent Sal Paolantonio doesn't take quite so majestic a tone in his new book, "How Football Explains America." But he does have some thoughts about the mythology behind the sport. Sal Paolantonio joins us from member station WHYY in Philadelphia. Sal, welcome.

Mr. SAL PAOLANTONIO (Football Correspondent, ESPN): Thank you for having me.

Mr. PAOLANTONIO: Well, the mythology of the game was created around two rules changes, one in 1880 and one in 1882, when the Intercollegiate Football Association met, the IFA, and they had two meetings. In the first meeting, they created the first down rule, the idea that you would hold and capture territory and defend it, ala manifest destiny, and then two years later, they created the quarterback position. The notion that one player a quarter of the way back to the full back would be in control of the pacing and the organization of the game. And when you have those two ideas, the first one, the idea of the first down, it clearly delineated a natural dramatic arc to the story on the field that wasn't apparent in the mass motion games of rugby and soccer. And then, with the quarterback position, you eventually would have this one position on the field where the mythology of the game would revolve around - the protagonist of the story would be the quarterback. He would lead his team much the way a mythological figure would in any story.

Unidentified Man #2: What a play.

Unidentified Man #1: What a play by Manning.

HANSEN: And in the case of that Superbowl, is the mythology enhanced by the fact that your quarterback, Eli Manning, was playing for an underdog, the Giants, against, you know, the monolithic undefeated Patriots?

Mr. PAOLANTONIO: Oh, absolutely. I mean, think of Luke Skywalker in "Star Wars." Eli Manning against the perfect Patriots was the perfect storm. You had this dramatical narrative throughout the season of the Patriots going undefeated, and they were really the evil empire.

They were viewed as a team that everybody wanted to see fail, but at the same time, was you know, entranced with the idea that they were pursuing perfection, could be the first team to go 18 and O. And then you had Eli Manning, this sort of goofy-looking kid from Mississippi and Louisiana. And this kid, nothing fazes him, and he's really the perfect character to be mythologized once he slayed the big fat dragon in Superbowl 42.

Mr. PAOLANTONIO: Yes. This is one of the great conventional wisdoms that I try to debunk in this book, the whole notion that television made football. Television needed football in the '50s. It needed a specific audience, those 25 to 64-year-old white males, and the way to do it was, on Sunday afternoon, when they weren't at work, they came home from church, and they had nothing to do, and it was too cold to go outside.

So they watched football on TV, and they advertised their programming. "60 Minutes" is a great example. "60 Minutes" on CBS became a powerful program and a great instrument for journalism because at seven o'clock, the football game was over, and "60 Minutes" came on right after that. So, the natural flow of the audience was perfect for CBS.

And the same thing happened in the early '90s, when FOX had programming, they had "Married With Children," they had "The Simpsons," but they didn't have and audience. So what did they do? Rupert Murdock went out, and he paid much more than the NFL was ever accustomed to getting, and by doing that, he brought an audience with football.

HANSEN: You know, Sal, professional, college, and even high school football now - they're big businesses. They're tied to huge entertainment industries and multinational corporate advertisers. Is this also in some ways American?

Mr. PAOLANTONIO: Without a doubt, and in the book, I have a chapter called, How Football Explains Show Business. You know, everything about football is show business. It's pageantry. It's color. It's marching bands. It's exorbitant in prices. It's big stadiums. It's people congregating for a mass consumption cultural event. That's what we do best in this country.

HANSEN: Sal Paolantonio covers football for ESPN. He's the author of "How Football Explains America," and he joined us from member station WHYY in Philadelphia. Sal, thanks a lot.

Mr. PAOLANTONIO: Oh, I really enjoyed it. Thank you. 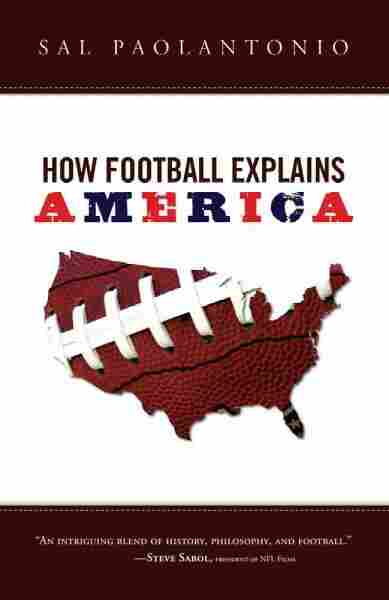