Accessibility links
India, Pakistan Relations Hurt By Mumbai Attack India's fragile relationship with Pakistan has been badly damaged by the attacks on Mumbai. Indian officials say the gunmen who invaded that city, killing nearly 200 people, arrived by boat from Pakistan, and the only surviving gunman is a Pakistani. Indian politicians are demanding that Pakistan's government act decisively to get rid of the violent Islamist extremists operating on Pakistani soil.

India's fragile relationship with Pakistan has been badly damaged by the attacks on Mumbai. Indian officials say the gunmen who invaded that city, killing nearly 200 people, arrived by boat from Pakistan, and the only surviving gunman is a Pakistani. Indian politicians are demanding that Pakistan's government act decisively to get rid of the violent Islamist extremists operating on Pakistani soil.

And the terrorist attacks in Mumbai last week have again highlighted how national security issues will be among the biggest challenges for the Obama administration. And one of the most volatile of the relationships that President-elect Obama will be dealing with is between India and Pakistan. When gunmen attacked a number of targets in Mumbai, they were well-armed and well-trained. And authorities say they arrived on boats from Pakistan. The only gunman who was captured turned out to be Pakistani. The attacks have put improving relations between the two nuclear powers at risk. NPR's Philip Reeves reports on what's at stake.

PHILIP REEVES: This is where two worlds meet, and this is how they bid each other goodnight.

(Soundbite of man calling out a long-drawn-out note)

REEVES: On one side stretching westwards lies the Islamic Republic of Pakistan, on the other, India. The sun's going down at Wagah, along the border between the two.

(Soundbite of crowd cheering and whistling)

REEVES: On this evening a few weeks ago, the border guards lower the flags and close the gates just as they do every evening. Soldiers strut and goosestep and glower, watched by enthusiastic crowds on either side. Yet the mood's more like a ballgame than a military ceremony. The Indian onlookers cheerfully root for their side.

REEVES: And the Pakistanis root for theirs.

(Soundbite of crowd chanting and applauding)

REEVES: If you peer beyond the gate, you'll see a wide, new highway stretching into Pakistan. The Indians are widening the road on their side, too. They've been getting ready for increased trade. Now, once again, their relationship's in trouble. A senior Indian government minister has directly linked the Mumbai attacks to Pakistan. India's TV news channels are expressing outrage.

Unidentified Announcer: The evidence - a detailed route from Karachi to Mumbai and back.

REEVES: So are the newspapers. One of Mumbai's leading dailies, DNA, says Pakistan should be isolated diplomatically. Pakistan's president, Asif Ali Zardari, has appealed to India not to punish his country. Remember, his wife Benazir Bhutto is thought to have been assassinated by Islamist militants. Zardari told The Financial Times newspaper the actions of rogue non-state actors could provoke a war. Saber rattling's common in the relationship between India and Pakistan, but that relationship is now at its lowest point since 2002 when these nuclear-armed neighbors massed their armies along the border after an attack on India's parliament.

(Soundbite of bells jingling and a horse trotting)

REEVES: An empty silver carriage glides along Mumbai's waterfront towards the battered hulk of the Taj Mahal Hotel. It's scouting for tourists, but there aren't many around. The few dozen people who are here have come to gaze at a scene they're still struggling to believe happened. Jaldeep Bajwah(ph) and his wife, Sonja(ph), plant a candle next to dozens of others that are now lighting up the night in memory of the dead. He's an IT executive. She's a fashion designer. Like many here, they're less willing to jump to conclusions about the Mumbai attacks than some of India's politicians and pundits.

Ms. SONIA BAJWAH (Indian Fashion Designer): We don't know who's doing it. They say it's the ISI or the other jihadists.

Ms. BAJWAH: Yeah, that's what they say. But, you know, what they say and what is are always different things.

Mr. JALDEEP BAJWAH (Indian IT Executive): This thing has stemmed from Pakistan. I mean, clearly the problem is related to the Kashmir issue. That's what we believe. Also, it's related to the fact that our economy is doing well even in a downturn. And these guys just want - these terrorists want to create a very bad impression of India.

REEVES: In what way would it be in the interest of Pakistan to orchestrate an attack like this? I mean, I'm trying to figure out what the reasoning would be if someone from there, if they were to...

Ms. BAJWAH: See, the point - I don't believe we have to raise issues about Pakistan and India. What is more important is to address the problem, not to start playing a blame game.

Mr. BAJWAH: Like, she's right. I don't think it's, you know, Pakistan who they should really hurt. These terrorists were trained in Pakistan, but this probably goes back to Saudi or, you know, whichever. These Taliban and, you know, al-Qaeda, these are all part of a big terrorist group.

Ms. BAJWAH: It's a global problem. Like, again, I said, we don't want to address Pakistan.

Mr. BAJWAH: Probably the Pakistanis were not even aware.

REEVES: A small crowd's gathered to listen to the debate. People begin to argue about whether Pakistan should be blamed and to what extent. Fund manager Sudir Changiani(ph) joins in. He says Pakistan's government is responsible, even if it had nothing to do with the attack. Your point, sir.

Mr. SUDIR CHANGIANI (Indian Fund Manager): Every government has a responsibility for what's happening on its turf. That's what governance is. A government governs its turf, its people, and the actions of them. And you say, oh, their government do that, so we can't do anything. You have a responsibility to ensure that your turf is not used for all that stuff. Otherwise, don't govern. These guys who've got the camps there, you've got to go after them. You've got to go and single them out and get them.

REEVES: And if they don't, India should act.

REEVES: By doing what?

Mr. CHANGIANI By whatever means necessary.

Security In Mumbai: An Impossible Task?

Security In Mumbai: An Impossible Task? 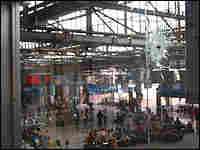 A bullet hole in the second floor of the Re-Fresh cafe at the Chhatrapati Shivaji Terminus station in Mumbai, where the terror attacks began. Andrea Hsu/NPR hide caption 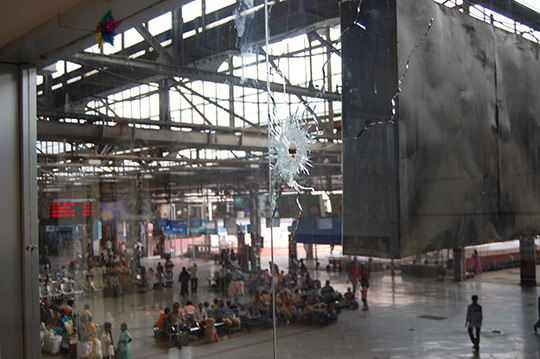 A bullet hole in the second floor of the Re-Fresh cafe at the Chhatrapati Shivaji Terminus station in Mumbai, where the terror attacks began.

Among the many images that haunt the mind in the aftermath of the Mumbai massacres, one stands out: a grainy photo of two clean-shaven men with neat, short hair.

They're entering a railway station where they will slaughter dozens of people. Each has an automatic rifle in his right hand. They're smartly dressed, and one has a blue backpack. They appear to be walking.

They look fresh-faced and very young; they could almost be students.

Shots Through The Window

Fongin Fernandes manages a restaurant at the Chhatrapati Shivaji Terminus station — or CST, as many here call it.

"The shots were coming, and suddenly we've seen two guys standing there," Fernandes recalls. They were less than 20 yards away. "One had a jacket, the other one was quite heavily built, but the other was a lean guy. They were young, what, about 22 years old."

The bullets flew through Fernandes' restaurant.

"I got little glass splinters in my hair, and my pocket was full of glass powder," Fernandes says. He told his customers to crawl on the floor to safety.

Officials in India now say only 10 gunmen took part in the onslaught on Mumbai. They're trying to figure out how so few managed to kill so many. Who was the mastermind? Where did the gunmen come from?

There are reports here that the militants arrived in the waters off Mumbai in a hijacked trawler. The Indian media is broadcasting pictures of the body of a man lying facedown, with his hands tied.

They say this was the trawler captain and allege that his vessel carried the gunmen from Pakistan.

Coming Back To Life

Nowhere is better proof of the ability of the city of Mumbai and India to rebound after a massive attack. This is just a couple of days after it happened, and already a railway terminal — one of the busiest in the world — is getting back to business.

The snack bars are open, and there are lines at the ticket terminals again. A small crowd of women in brightly colored saris smiles and chats. But you can tell there has been a serious incident here.

The clue to that is the number of police officers and security forces stationed around the terminal. They're carrying automatic weapons, and there are a lot of them. Some of them are positioned behind sandbags.

Yet this railway station is as vulnerable as ever as passengers walk in carrying bags without being checked.

"We have to clearly blame the government for this," says Pravin Gupta, a customer in Fernandes' restaurant. "What happened here could have been avoided."

Gupta is a consultant for hotels and airlines. Security is part of his work. He travels through this station regularly and isn't impressed.

"We have about 106 police personnel at any given time at the station. And all they're interested in is when the bosses come up and down, they're at attention with the carbine," Gupta says. "And when he goes away, they're not bothered. They have so many screening metal detector machines. Have you seen anybody using them? I mean, they're just for namesake, totally symbolic."

In the past few days, attention has been focused on two besieged five-star hotels frequented by foreigners and the Indian elite. Gupta says other victims are being forgotten.

"Today, people are talking about Taj and Oberoi, but so many people died here. Is anyone talking about them? If you look at the death toll, only 22 Westerners [died] here. The death toll among Indians was much higher," Gupta says. "They were targeting anyone."

He's sitting about three inches from a bullet hole in Fernandes' window. Despite the danger he warns of, he's not worried. "It's destiny, basically," he says. "If I have to die, I could die anywhere. I've been here so often, and it's just destiny I was not here that day. One of my friends got shot down. He's on a ventilator at Bombay Hospital. It's just destiny."