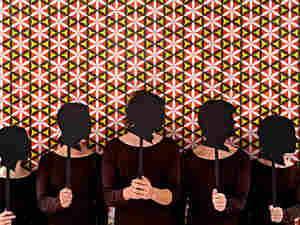 Fol Chen is a Los Angeles-based electro-pop band recently signed to Asthmatic Kitty, a record label known for being co-founded by chamber pop artist Sufjan Stevens. The group's debut isn't set for release until February 2009, but Part I: John Shade, Your Fortune's Made has already garnered online buzz with the first single, "Cable TV." The wildly infectious dance tune begins with a dash of sitar before digital blips and drum machine hand claps jump in, with singer Melissa Thorne's smooth vocals. "Won't you come away with me?" she asks. But "Cable TV," while catchy, isn't the highlight of the album.

On the Asthmatic Kitty Web site, the members of Fol Chen offer a curious description of their music: "You know that mysterious black object that the creepy family is staring at on the cover of Led Zeppelin's Presence album?" they ask. "Fol Chen sounds like that." It's a dramatic and intentionally vague statement, but Fol Chen is at its best when invoking drama and all things theatrical, as it does on the album's opening track and upcoming single, "The Believers." Its ominous, layered vocals and equally eerie mix of horns, strings, kalimba and electronics make the tune one of the more compelling cuts. Similar elements are used throughout Part I: John Shade, Your Fortune's Made, even in the album's more playful moments. The result is a record that balances light and dark, and is fresh enough to hold listeners captive.