Accessibility links
Homeland Security: Rethinking What Works Obama will be the first new president to take office with a Department of Homeland Security, the agency created after the Sept. 11 attacks. Current DHS observers say he should look at the agency's successes and flaws before reorganizing it. 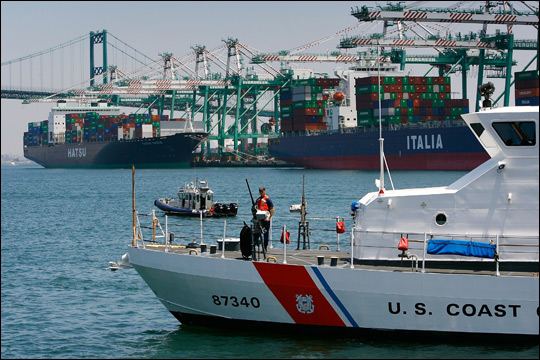 Barack Obama will be the first new president to take office with a Department of Homeland Security. The agency — created after the Sept. 11 terrorist attacks — is still struggling to get on its feet, but it got very little attention on the campaign trail.

For the most part, what we have come to know as homeland security has become a kind of background noise in our daily lives. We dutifully whip out our photo ID to board a train or enter an office building. We remove our shoes and belts at the airport.

But Tim Sparapani of the American Civil Liberties Union questions whether any of this has made us safer. He thinks now — with a new administration about to take over — is a good time for the country to rethink what it does in the name of homeland security.

"We started out in the immediate aftermath of 9-11 on this crazy path, with the premise that, somehow, if we got your name, we could know enough about you in order to do security and prevent you from doing harm to the country," he says.

But he says that has led to a proliferation of ID requirements and an increased reliance on watch lists, which Sparapani thinks are of limited value. He says such lists often snag the innocent and slow down commerce, but provide little protection.

"Any terrorist worth his or her salt can go out and get a fake ID in about 20 minutes, or they can show up under their own name if they're not a name of somebody that we've been monitoring abroad," he says. "And there are lots of people, unfortunately, who have been willing to be recruited whom we would never know about until the moment they actually commit an attack."

Sparapani and others think it would be better if the government focused more of its attention on developing good intelligence to help identify those who pose a real threat.

James Carafano, a homeland security expert at The Heritage Foundation, says the government's multi-billion dollar investment in what's often referred to as "guns, guards and gates" is the wrong way to go — that it's futile to try to protect everything in a country that has a seemingly endless number of potential targets.

"You can't childproof your way out of this problem," he says. "And if you actually look at what's been most effective in preventing terrorist attacks, it's going out, finding conspiracies and breaking them up, going out there and looking for the bad guys and stopping them before they even get near their target."

His advice for the incoming administration? "I would say worry about the greatest threat to homeland security, and that's the U.S. Congress," he says.

More than a hundred committees and subcommittees have some piece of the Homeland Security pie.

Carafano says that has led to lots of pork barrel spending and mandates that the fledgling agency change direction to respond to the crisis du jour — immigration or hurricanes or the threat of a biological attack. He says it has also meant repeated efforts to reorganize the new department before it has had a chance to make the current structure work.

"All Congress wants to do is to fixate on the Department of Homeland Security and pretend like it's a little rat trapped in the corner that it can just poke with a stick and watch it jump up and down," he says.

Those pressures will likely grow. Local communities are expected to want more Homeland Security funding, not less. And calls to remove the Federal Emergency Management Agency from the department continue, two years after the agency's bungled response to Hurricane Katrina.

But the department's former undersecretary for preparedness, George Foresman, says President-elect Obama has to stay focused.

"I think that part of what the president-elect and his team are going to have to do in those first days of office is really focus not on rearranging the deck chairs, but really taking a hard assessment at what's working, what's not working," he says.

He adds that it's important for the new administration to find ways to strengthen the young department. Homeland Security — created by merging 22 different agencies — has among the lowest employee morale in the federal government. Current Homeland Security Secretary Michael Chertoff says his advice for the new administration is to stay the course.

"I'm going to write a memo myself," he said in an interview with NPR. "I'm clearly going to suggest that we need to continue to implement what we've done to keep dangerous people out of the country. That includes both the measures we have to enhance security at the ports of entry, and it includes continuing the process of building the tactical infrastructure and the border patrol assets between the points of entry."

Those include things such as a planned virtual fence along the border and requirements for new, more secure driver's licenses. But these measures face growing opposition as public concern about terrorism wanes. The question for some is whether the new president — focused on a troubled economy — will have the time and desire to make big changes in Homeland Security, and risk getting blamed if there's another attack.