Accessibility links
Sailing The World At 17: Rounding Africa Zac Sunderland turned 17 this weekend, six months into a voyage around the world. As he tries to become the youngest sailor to circle the globe solo, he has already dealt with rough seas, bad weather and a mysterious pursuer. 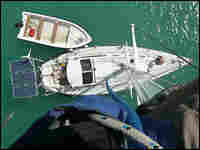 A view from the mast of Zac Sunderland's home at sea, the Intrepid. Courtesy of the Sunderland family hide caption 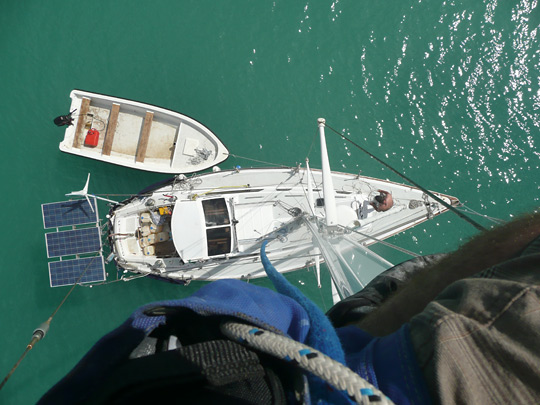 A view from the mast of Zac Sunderland's home at sea, the Intrepid. 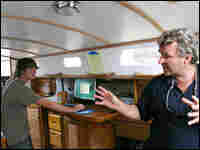 Laurence Sunderland (right) is both father and sailing mentor to his son Zac, 17. Courtesy of the Sunderland family hide caption 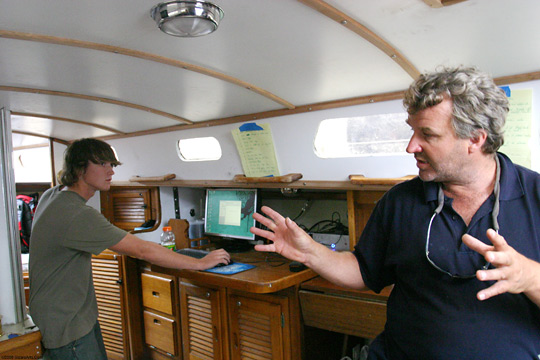 Laurence Sunderland (right) is both father and sailing mentor to his son Zac, 17. 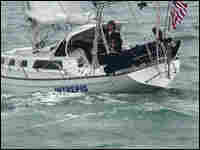 Zac aboard the Intrepid. Courtesy of the Sunderland family hide caption 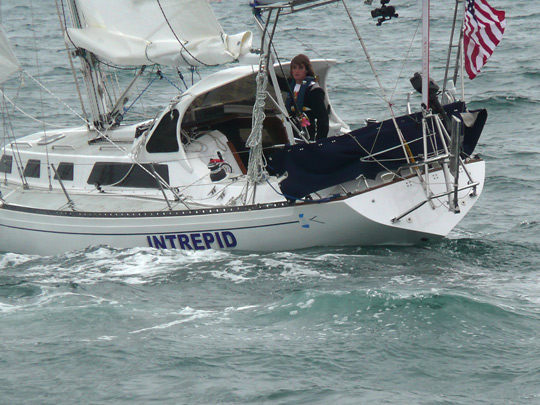 Zac aboard the Intrepid.

I saw Zac Sunderland six months ago on his 36-foot sloop at a dock in Los Angeles. He was a tall California kid, a 16-year-old in that mixed age of late adolescence — part serious, part goofy. But Zac was getting ready for something very serious: his attempt to become the youngest person to sail around the world solo.

Now he and his boat, the Intrepid, are a little more than halfway there.

A couple of months ago, Zac made an emergency call home to his father from the Indian Ocean near Indonesia. A mysterious boat was following him and drawing closer. It ignored his radio contact attempts, but every time he changed course, so did his pursuers.

"Load your gun," Laurence Sunderland advised, "and if they get close enough to board, shoot to kill."

That boat finally turned away without confrontation, but the big storms and the long, sometimes lonely days are inescapable.

On Saturday, Zac celebrated his 17th birthday aboard the Intrepid. He was near southern Africa, off the coast of the enormous island of Madagascar.

The island is so big that it has its own continental shelf — which can help generate waves of 40, 50 and 60 feet. If he stays far enough off-shore, he should miss them. But in the next six weeks, the Intrepid will try to sail past the tip of South Africa and the Cape of Good Hope.

"There's a storm that rolls through the Southern Ocean every three days," Zac's mother, Maryanne, said.

In the Sunderland home on the outskirts of Los Angeles, Maryanne Sunderland explained how she and Laurence help Zac chart the safest course, with satellite updates to help with the weather.

"We'd heard that [about the storms]," she said, "but now we have the forecasting software, you can actually see them. They're huge, spiraling masses; they're purple, which means heavy winds."

Zac's father is a professional sailor, but this is not a wealthy family. As detailed in a previous story, Zac bought a well-used older boat for this voyage, and he's put his own sweat and a lot of help from family and friends into making the attempt. There have been moments when he probably wished he hadn't.

The worst moment came three weeks ago as Zac was crossing the Indian Ocean in a big storm at night. The rigging began coming apart. He went on deck, the big waves rolling down, a wild sail torn and beating free. He pulled things back as best he could — because he was alone and that's what you have to do.

"He nearly got knocked off the boat several times," Laurence Sunderland said, "and though he had a harness on — if you're on the bow of the boat, if you're going to fall over, there's pretty much no chance of getting back on the boat."

But it was his mother who finally helped him get through it.

"At one point he said, 'I'm so exhausted. I can't do this anymore. I just, I have to sleep,'" she recalls. "And I said, 'Then you have to sleep; you have to take care of you.' And he did, he went down below, he fell asleep and he woke up. The seas calmed down to 8 to 10 feet and the sails stopped flogging, and it was like the horrible situation just resolved."

"They're really fast-moving down here, and there's not much you can do," he said.

"You have to be really, really careful," he said. And that's especially true as the seasons change.

"So I may be in a little more danger," Zac said. "From what I hear, no one gets off unscathed."

As the tagline goes: "Explore the world, discover yourself." Zac is on schedule to be the youngest round-the-world sailor.

Even if Zac does make it, his record may not last; another youngest-around-the-world attempt began a couple of weeks ago. But he'll be back home, safe at harbor again, with a small crowd waiting in welcome.